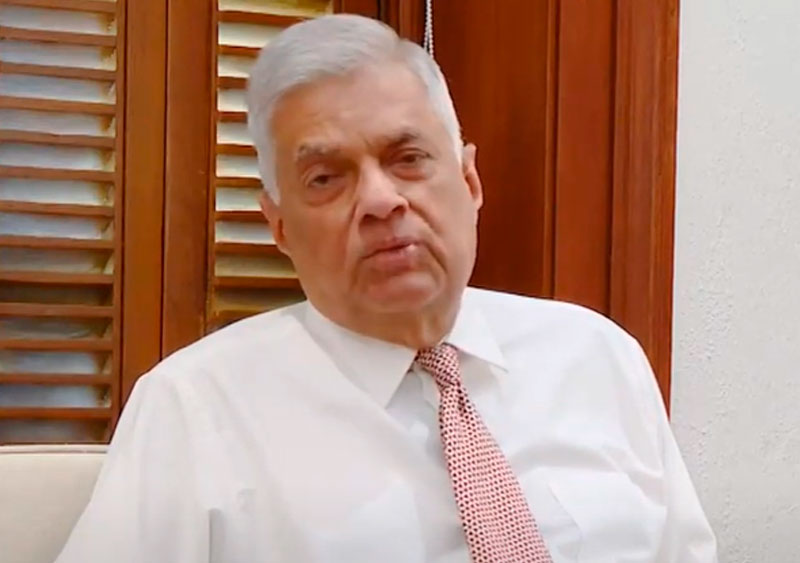 In a special statement on tax policy, he said, “We will have to make tough decisions during these difficult times. I took on this difficult task when no one else was willing to come forward.”

He added the government is ready to discuss this further.

The president’s full statement is given below:

“An important step in Sri Lanka’s debt restructuring program took place last week. A team under our Minister of State for Finance participated in the annual meeting of the International Monetary Fund (October 07). Accordingly, a meeting was held under the leadership of the International Monetary Fund, with the countries that had given loans to Sri Lanka and some private institutions that had also given loans.

Over 75 persons participated directly or through zoom technology. The primary purpose of this was to come to a common platform with the three main countries that have granted loans to Sri Lanka, namely Japan, China and India, and discuss the next steps to be taken to provide these concessions.

During this meeting, the International Monetary Fund and Sri Lanka pointed out the need for a common platform. India and China have informed us that they will investigate further and provide answers. These two countries have also informed us that bilateral discussions may be required.

Many other countries also participated in this meeting. It is notable that, an Assistant Secretary of the United States Treasury came here. All this was possible because we are implementing the decisions taken in consultation with the International Monetary Fund.

There is one thing about the income of the Government of Sri Lanka. In 2015, when the representatives of the International Monetary Fund came to Sri Lanka, we were told of the need for a surplus in the primary budget. Therefore, we provided that surplus in 2017-2018. But it was reduced as a result of the 2019 Easter Sunday bombings. However, there were no serious issues. They were optimistic that we would be able to increase our revenue, to have a surplus in the primary budget.

However, in November 2019, the country’s taxes were drastically reduced. Then the government revenue decreased to 8.5%. There, the International Monetary Fund declared that it is unable to provide aid because of these agreements.

That year we lost around Rs. 600-700 billion. Simultaneously, we had to face the Covid-19 pandemic. These issues are the main factors that led to the collapse of Sri Lanka’s economy.

The International Monetary Fund notified us that we need to show a surplus in our primary budget. We agreed to it because we needed their support.

Initially, we had to think about how we were going to increase our income. We have printed money because our income decreased. During the past two years, Rs. 2,300 billion has been printed. As a result, inflation has risen to 70% – 75%. Food inflation has increased even more. These need to be controlled, but we also need to secure our income. Therefore, a new tax system was proposed during these discussions. The International Monetary Fund had notified that even the export industries are required to pay taxes.

It was indicated especially in countries with an export economy, taxes are being paid. The IMF also pointed out that our primary export economy was the plantation industry. During British rule, taxes were charged from every plantation sector, including tea, coconut and rubber. Therefore, we decided that if we are to move towards that goal, we will have to pay taxes. The export sector has now questioned this move and if these facts are to be submitted to the International Monetary Fund, we have discussed carrying out an analysis.

The second matter is individual taxes. We have obtained the majority of taxes through indirect taxing. Even the majority of the country’s people below the poverty line had no choice but to pay taxes indirectly. Our direct tax revenue is 20%. 80% which was derived from indirect taxes.

The International Monetary Fund had specific questions about it and they were of the view that the amount of tax obtained from direct taxes should exceed 20%. Otherwise, they noted that this would not be successful, as ordinary citizens would be forced to pay taxes.

Therefore, according to this mechanism, and to achieve the goals of 2026, the Treasury and the International Monetary Fund discussed the possibility of limiting the taxation from those who have an income of Rs. 200,000, but that was not possible. Eventually, income tax was levied on people earning over 100,000. Today, this has become a huge problem in the country.

I would like to point out that based on this backdrop, we may not be able to achieve the desired goals without this tax system. The desired goal is to achieve 14.5% – 15% gross domestic product (GDP) revenue by 2026.

If we withdraw from this program, we will not receive assistance from the IMF. If we don’t get the IMF certification, we will not get the support of those international institutions such as the World Bank, and Asian Development Bank, and the countries that provide support. If that happens, we will have to go back to the era of queues.

We may have to face even tougher times ahead. We have to obtain these loans and go for the debt-restructuring program. We are not doing these wilfully. We have to take certain decisions even reluctantly. However, we will reconsider these decisions periodically.

While successfully conducting our debt restructuring program, we expect to move forward through the economic success achieved through a bountiful Maha season. This will help reduce our economic pressure. We have also discussed measures to increase our foreign reserves. Once we have implemented these measures, we can move forward.

We are in a difficult period. We will have to make tough decisions during these difficult times. I took on this difficult task when no one else was willing to come forward. Hence, I feel I must enlighten everyone regarding this background. The government is ready to discuss this further.”