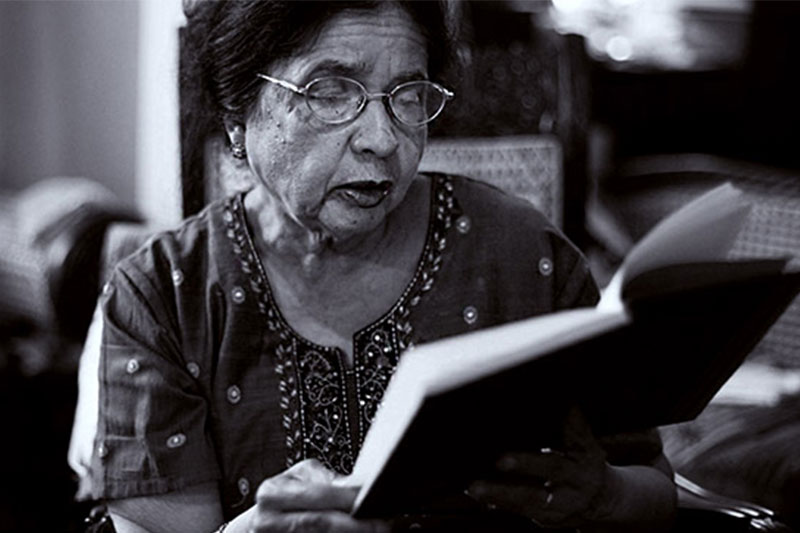 How do I begin?

Perhaps with a conversation between two poets, both women, both from Kandy, both outliers. I had just begun publishing my poetry, and Aunty Jean, as the great Jean Arasanayagam was always known to me, and I were having a good old fashioned afternoon chat before lunch at some poetry event in Kandy. She recognized the restlessness in the younger poet, the refusal to deliver on expectations—after all, these were paths that she had defined in many ways: a woman, a poet, fearlessly articulate in a place that was, and is, still uncomfortable with loud women.

I know that we will reopen her many volumes of poetry and fiction as we remember her, but I want to celebrate a woman who taught me how to be unafraid in a world defined and governed by the voices of male pundits who still tell women what they should write about. You would imagine that no one would have dared tell Jean what she could or couldn’t say; after all, this was the woman who would inscribe the grotesque violence of a people and place as the infinite violation of body, of woman:

But her stories that afternoon showed me that the journey of a woman poet in Sri Lanka, in the twentieth century, was fiercely lonely; it was cobbled with brief moments of self affirmation, and more often paved with the voices of community, society, even family, telling her that she did not belong. Jean knew intimately what this meant, what it meant to cross the boundaries of race, class, caste; to love without fear, to throw off the shackles of containment and tradition.

The last time I spoke to Jean she had called me to say she was sorry she had missed a concert I had given. Whether it was music, art, theater, a poetry reading, or a conference, you can be sure that you would run into Aunty Jean and Uncle Arasa, and their absence that evening brought home with stark clarity that a moment that had defined a place was passing. Jean, like my father Ashley Halpé, was a poet of place. Even when forced into the makeshift refugee camps at Wijewardene Hall during Black July 1983, the ties that bound her to Peradeniya, then to Kandy, and to old friendships, were never eroded. It was here that she lived her life with fellow writer and essayist Thiagarajah Arasanayagam, and here that she raised two daughters Devi and Paru to be poets, and fearless women.

My only hope is that her legacy will live on in the voices of the Kandy poets and that we might echo the fierce and uncomfortable truths of the place that exiles even as we call it home. And Aunty Jean, wherever you are, may your voice rise, as the sun and rain break open the cadence of all our tomorrows.

PIC APARNA: Dr. Aparna Halpe is Professor of English at Centennial College in Toronto, Canada. Her collection of poems titled  "Precarious", was published in 2016 by Perera Hussain, Colombo.
© JDS