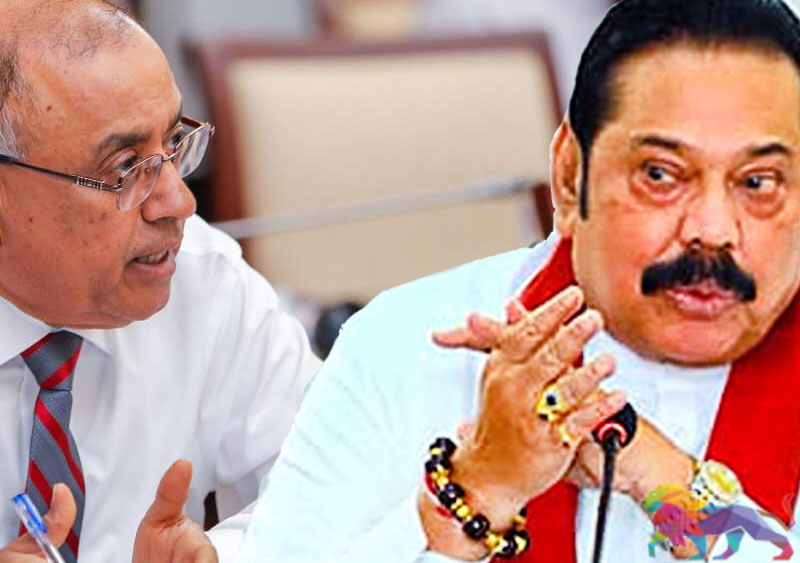 The arrogant actions of the Secretary to the President, Dr. P.B. Jayasundera,
who has been abusing the president's name to control the entire state apparatus, have subjected Prime Minister Mahinda Rajapaksa to severe humiliation in front of government ministers and officials, internal government sources revealed.

The inability to get a proper response from the President's Secretary to even a phone call from the Premier or the State Minister of Finance, Ajith Nivard Cabraal, has left them in embarrassing situations in front of businessmen and government officials on multiple occasions in the recent past, a senior Treasury official said.

He explained such an incident that took place last week and submitted the following documents. The details are as follows. 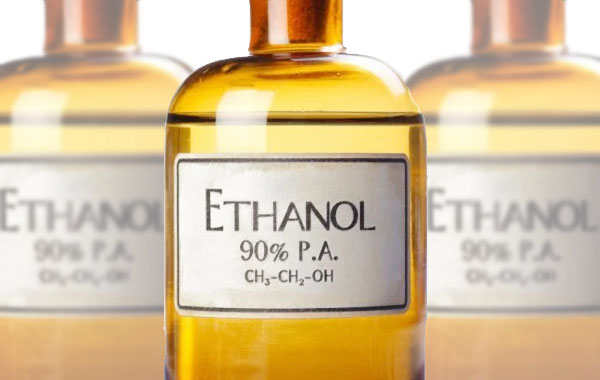 With the recommendation and approval of the Excise Department, 5,000 liters of laboratory grade ethanol to be used by hospitals, the Government Analyst's Department as well as universities for disinfection purposes, was imported recently.

The Secretary to the President, however, has revoked the approval granted by the Department of Fiscal Policy of the Ministry of Finance without the consent of the Finance Minister Mahinda Rajapaksa or Finance State Minister Ajith Nivard Cabraal.
A group of representatives from Neo Chem International (Pvt) Ltd (the local agent of Merck & Co in Germany) which imported the laboratory grade ethanol to Sri Lanka, recently met the Prime Minister and sought his intervention to release the stock of ethanol from the Customs Department.
In January this year, the government had banned the legal import of ethanol stating that a sufficient amount of ethanol was being produced inside the country. However, Neo Chem requested the President in February to allow the importation of ethanol into the country only to be used for medical purposes. 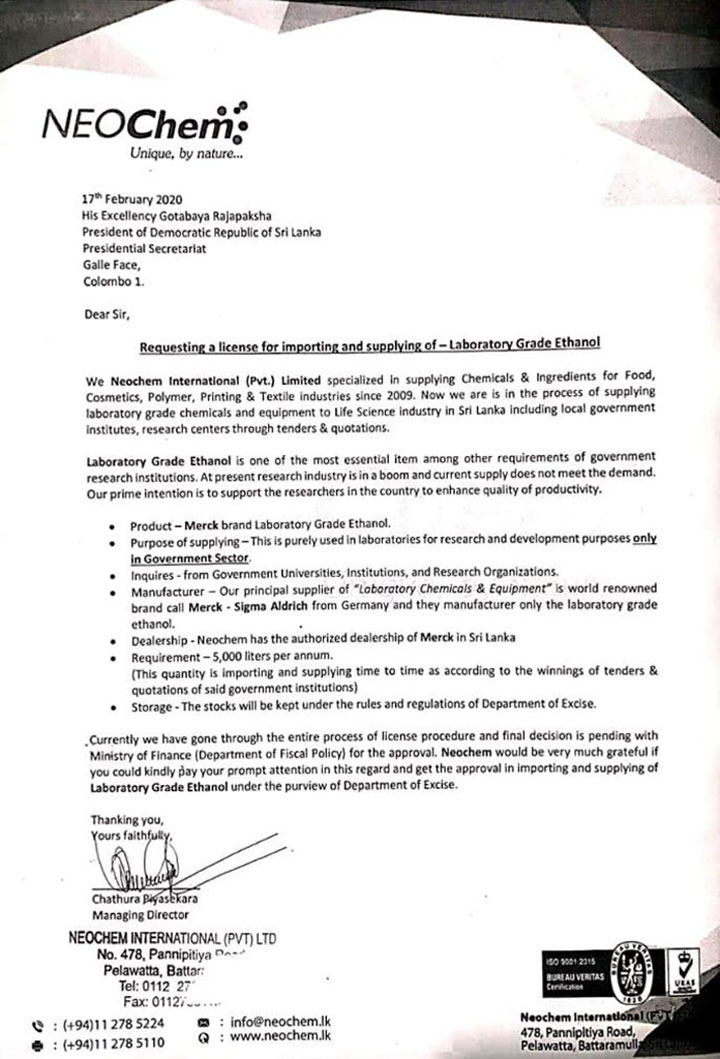 Accordingly, the Additional Secretary to the President, Indika L. Wijegunawardana had instructed the Treasury Secretary to "take necessary actions as deemed appropriate". 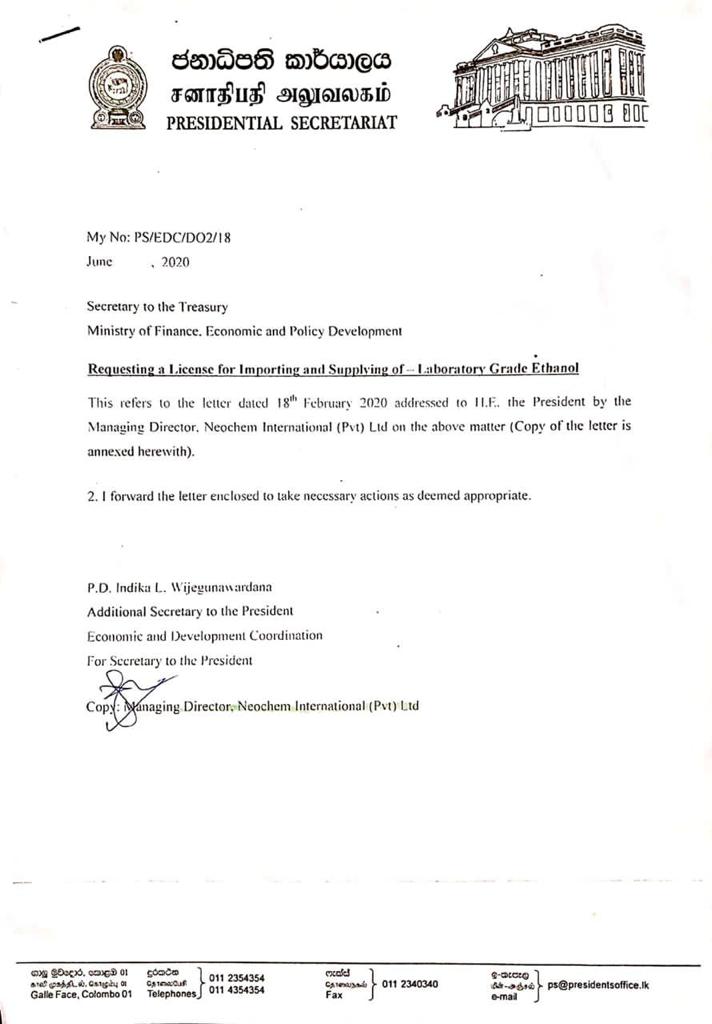 Subsequently, the Excise Department of Sri Lanka had issued a license for the sale of rectified spirits on June 22 with the validity of the license ending on December 31. 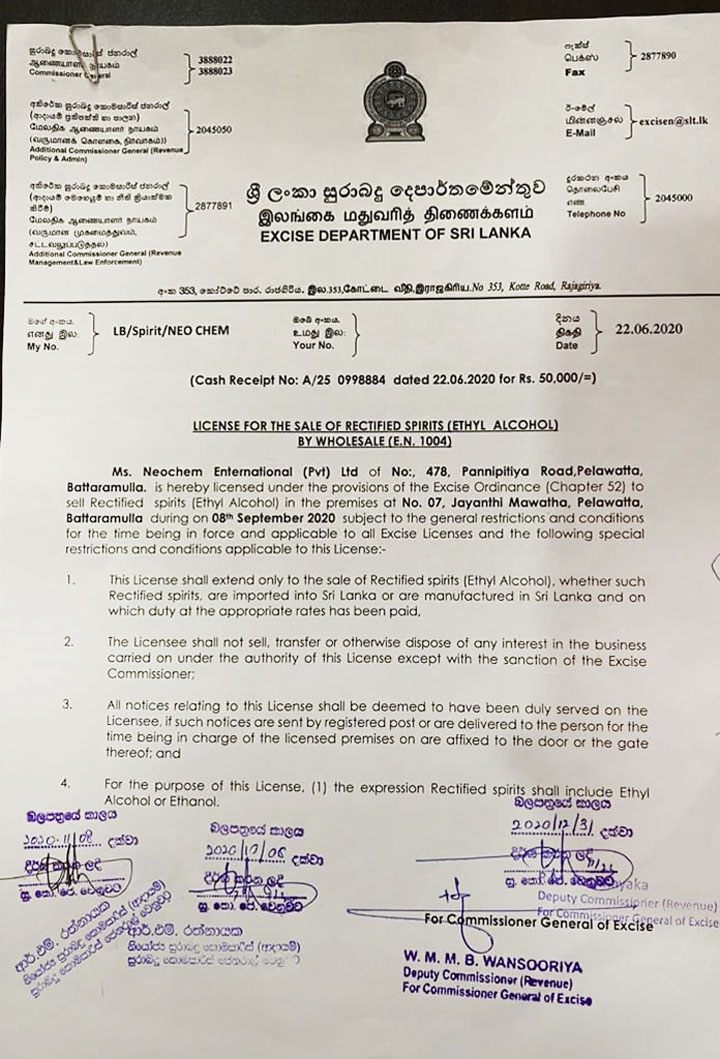 The Director General of the Fiscal Policy Department of the Ministry of Finance, Dr. M. K.C. Senanayake had informed the Commissioner General of Excise in writing on November 19 that they had no objection and that the Treasury has granted approval to NEO Chem International (Pvt) Ltd to import the laboratory grade ethanol. 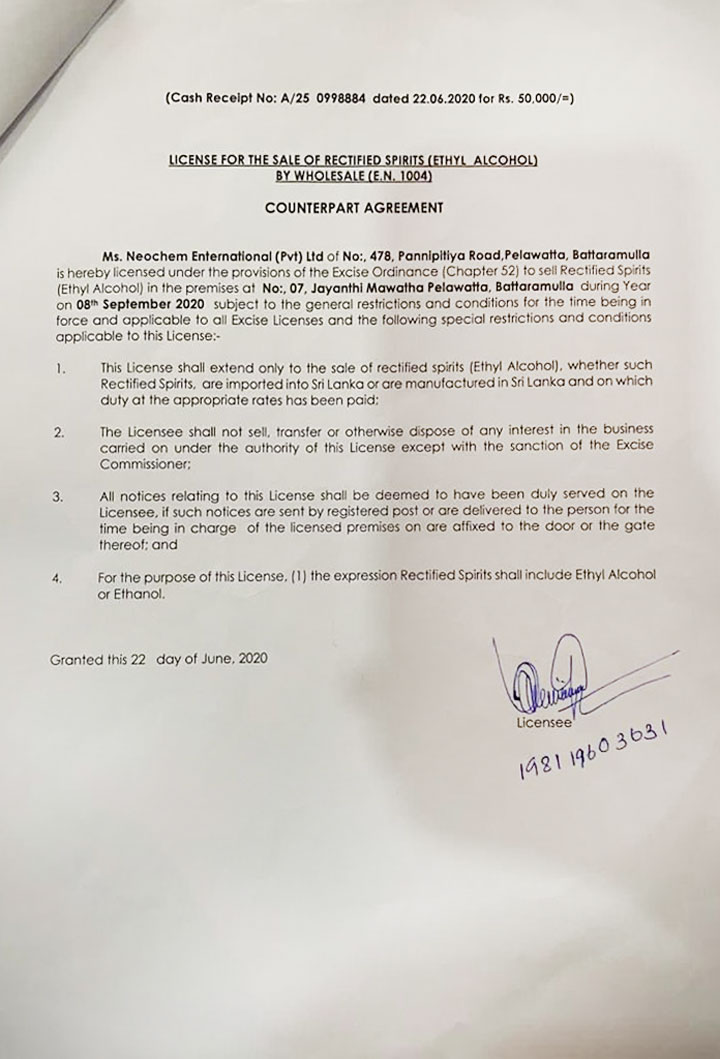 Accordingly, the Commissioner General of Excise, D.M.W.K. Dissanayake had informed the Controller of Imports and Exports on November 19 to grant approval to NEO Chem International (Pvt) Ltd for the importation of ethanol. 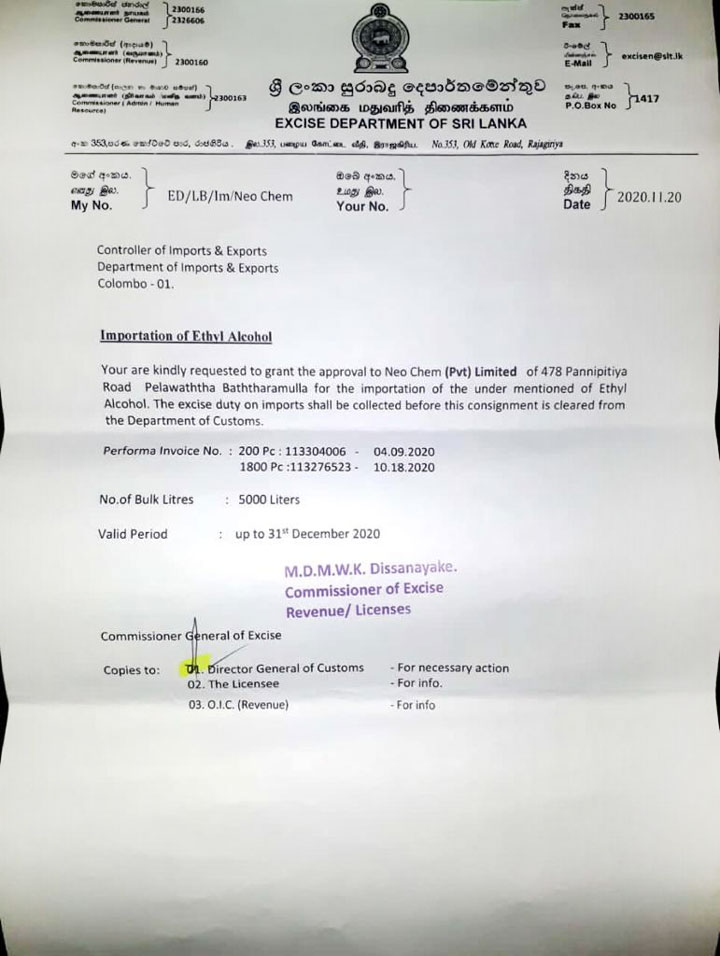 However, the Director General of the Department of Fiscal Policy of the Ministry of Finance, Dr. M. K.C. Senanayake had informed the Commissioner of Excise on November 24 that the approval granted to Neo Chem for the importation of ethanol had been revoked. 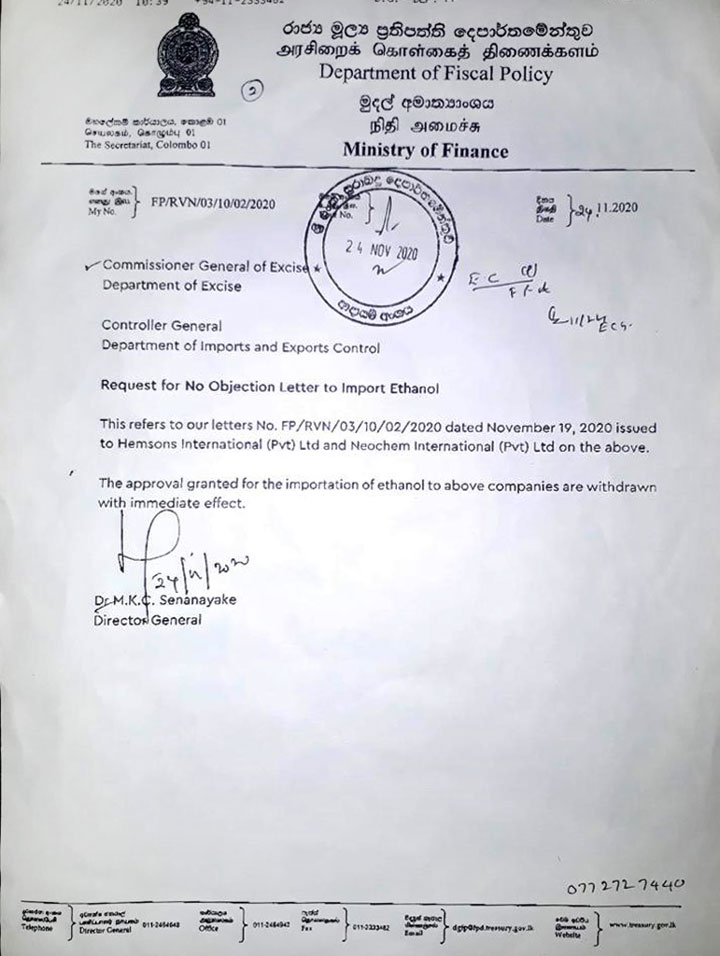 An order from the Secretary!

The representatives of Neo Chem International (Pvt) Ltd had called on Prime Minister and Minister of Finance Mahinda Rajapaksa to seek redress.

Further, the official had stated that the Secretary had implied the directive originated from the President.
Family ties?
After the Prime Minister's Office had instructed to immediately investigate the matter, an inquiry had been carried out by the relevant officials of the Ministry of Finance. It was revealed that the license for the importation of laboratory grade ethanol might have been revoked due to the pressure exerted by another local company that was engaged in the importation of ethanol into the country.

Merck & Co. of Germany had previously stripped this local company from operating as its local agent due to a serious fraud committed by them.

It is reported that a group of officials in the Prime Minister's Office are currently on a mission to find out whether a person named Jayasundara, the owner of the company mentioned above, and his family members in the board of directors, have any relationship to this invincible official.