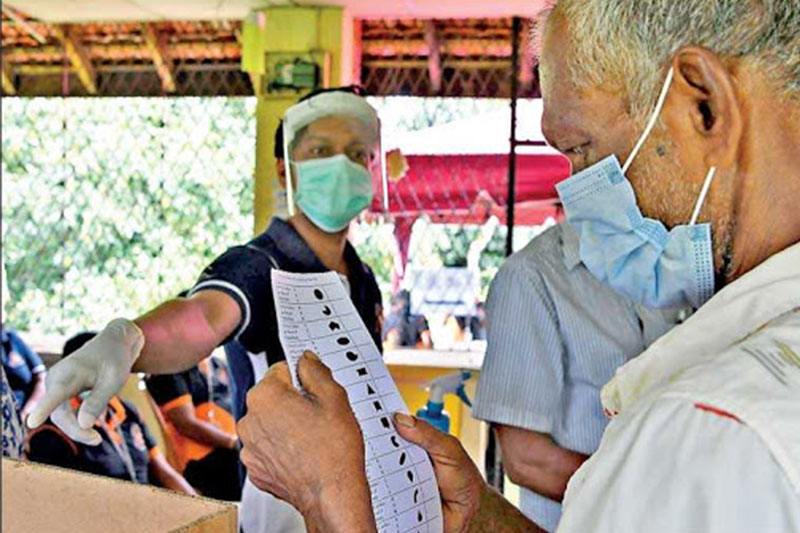 The ideological backwardness overwhelming the political system of Sri Lanka can be considered an important factor that has rendered it difficult to resolve the
crisis the country is facing. The crisis of Sri Lanka which has now reached a state of extreme deterioration can longer be resolved with patchwork and darning within the old system. Yet, both the politicians and the society in general that had got accustomed to the old system have failed to comprehend this reality.

The crisis of Sri Lanka is not an outcome of the Covid pandemic. It can be considered a crisis that emerged since independence and had gradually escalated to a maximum when the Covid pandemic broke out. What the pandemic which had fallen on top of the crisis, all of a sudden had done was to intensify the latter which had already reached its peak and an explosive proportion. It can be regarded as an immense socio-political crisis which is not confined to an economic crisis only.

The nature of the crisis

The crisis in Sri Lanka can be considered a phenomenon associated with the breakdown of social integration caused by the affliction of minority ethnic groups, religions and castes by the state of Sri Lanka, from time to time, since independence & the protests launched by afflicted parties against such discriminations ending in armed struggles which had been suppressed violently. This situation has resulted in creating a ruthless State that did not respect the Constitution, the Law of the country or democratic values. The degeneration associated with this situation has resulted in making the plunder of public wealth a permanent feature, the hallmark of State governance and the entire State and its institutional system corrupt. The prolonged neglect of introducing reforms leading to the removal of these anti- democratic and corrupt features of the State has resulted in these drawbacks being solidified  and creating a dismal situation leading to the complete collapse of the State as well as the socio-political system and the economy of the country.

There is no simple solution to the current crisis. The magnitude of the crisis is such that it can not be solved with mere patchwork remedies. It has to be overcome by identifying and implementing structural reforms that would lead to the recreation of the Sri Lankan nation and the modern Nation State. The intellectual bankruptcy and undemocratic and rapacious nature inherent in the country's traditional political rule have deprived the country of the opportunity of providing leadership for such a reformatory program. Therefore, it can be said to have become a challenge that has to be won only by a program where the people themselves should directly intervene and exercise their sovereignty.

It is essential that an apposite framework is formulated in order that the bulk of the responsibility of recreating the State and the socio-political system which is rapidly moving towards a total collapse, is removed from the public representatives and transferred to the public themselves thus, preventing the country from heading towards anarchy.

Although it still remains a methodology which is not familiar to Sri Lanka, it is a formal system recognized by many countries in the world, international law and even by the United Nations. It has been   used by many countries in recreating a new system when their entire system has collapsed. Nicaragua in 1986, Brazil and Uganda in 1988, South Africa in 1994, Eritrea in 1997 and Rwanda in 2002 can be considered as the States that have successfully applied this method in recreating their system of governance. It was the people, not the parliamentary representatives who acted as the pioneers of reconstruction of the system in all above countries. It was the system of direct democracy and not the representative democracy that was employed in this transformation.

This methodology is known as “Participatory Constitution Making" or “Peoples Constitution Making”. It is not a system restricted only to drafting a Constitution, but a comprehensive process that empowers the public to look into all aspects and make required changes in any of those areas. There is a great deal of literature written on this subject and of which the article titled “Democratic Constitution Making” written by Vivien Hart, a Professor of the University of Sussex, can be considered one of the outstanding articles on the subject which is available online as a special report of the United States Institute of Peace. A Sinhala translation of this article is included in my book titled “Andura Durleema” "Getting out of Darkness".

Apparently, none of the countries which had adopted this methodology successfully was aware of the availability of it, initially. However, the people of those countries were able to recreate their State and the nation innovatively and successfully once they were guided properly and equipped with a framework that conferred them necessary powers to make the transformation they wanted. The achievement of a sophisticated and modern society capable of rational and equitable assessment of facts can be regarded as a unique accomplishment by all countries that have undergone this transformation.

Instead of pursuing a policy that treats all citizens equally, and protects them without bias, they have devastated the national integration by adopting a policy of persecution and oppression of people on the basis of race, castes and religious differences. Under the circumstances, this can be said to be the most reliable and only realistic option left to Sri Lanka to rescue itself from the total collapse it has plunged into. The role of the people's representatives in this crisis is limited. It need not stress the adverse impact of their irresponsible, unlawful, corrupt and rapacious behavior on the current pathetic plight of Sri Lanka. They have even dared to play with the system of governance and the Constitution, the supreme law of the country. They followed a policy of plundering while acting as the temporary custodians of public property. This, in turn, led to corruption and rot in the State and its institutions. Instead of pursuing a policy that protects all citizens alike and treats them equally, they pursued a policy that persecuted and oppressed people on the basis of race, caste and religious differences thereby destroying national integration. Therefore, they, as people’s representatives cannot claim to have had an ethical ability to lead a program intended to recreate the nation and the State, both of which had declined into a perilous state, mostly due to their own reckless and irresponsible actions.

However, as public representatives, they will be involved in the proposed transformation program, but a major share of responsibility of leading the process shall lie with the public themselves and not with their representatives. The Members of Parliament, in their capacity as public representatives will be included in the Constitutional Assembly, the main body that serves as the center for planning, decision-making and monitoring of all operations of the transformation   program. Nevertheless, the public must gain the majority representation in such a council. It will serve as a rare and historic opportunity where the public will exercise their sovereignty in keeping with direct democratic principles.

On the eve of a transformation

In this process the people, the owners of the sovereignty will get an opportunity to explore formally everything they need to know about the transformation. They will explore all important factors that had led to the decline and collapse of the State. They will also look into the persecution and oppression of people on ethnic, caste and religious biases and the riots and insurrections caused by them, the violations of the Constitution for power hungry, selfish objectives, the role of the legislature, the executive and the judiciary, the destructive role played by the media, extortion of public property by the ruling parties. They will also look into all important aspects of State Administration such as Education, Public Health, Passenger Transport, Industry, Agriculture, Businesses, Trade, Energy, Environment, Natural Resources, and Development projects and Foreign Policy. In this exercise they will act as fact finding supervisors, judges meting out justice for those who had been denied justice, and the initiators of the recreation of the Nation and the State.

There is no other viable option to rescue Sri Lanka; whatever the outcome of the election will be for the political parties at the end of the forthcoming parliamentary election, certainly the country will be pushed to a crossroads which is sine qua non for a real transformation.

Under the circumstances, it seems quite likely that the significance of the political signal given by Mangala Samaraweera could manifest soon in a new wave. Sharp divisions will surface in the old stream of politics and those having a clear self conscience will begin to appear for the change vehemently while the ruling party or parties in power may find it is impossible to remain aloof without opening the sluice gates for transformation.
Victor Ivan