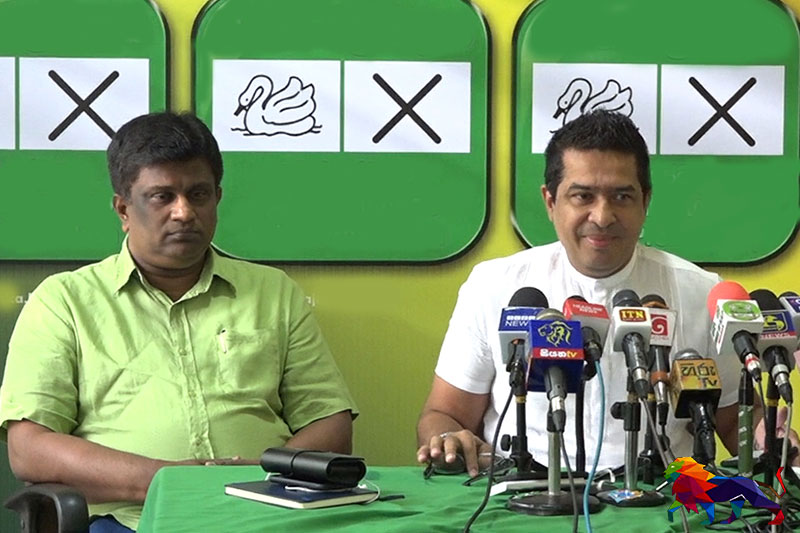 The United National Front (UNF) says that regardless of the technical details on whether Sri Lanka Podujana Peramuna (SLPP) presidential candidate Gotabaya Rajapaksa is a US citizen or not, New Democratic Front (NDF) presidential candidate Sajith Premadasa would work to defeat him at the presidential election.
While Gotabaya Rajapaksa's US citizenship has once again become a topic of discussion, UNF Ministers Ajith P. Perera and Sujeewa Senasinghe held a press briefing yesterday to discuss Premadasa's election campaign.
"Sajith does not care about Gotabaya's citizenship issue since he will be defeating him before the people's court. We will not try to defeat Gotabaya on a technical issue when there's a public election at hand. Sajith believes that steps should not be taken to resort to such actions," Perera said.
However, Perera went on to say that Rajapaksa is not a US citizen and only a Sri Lankan citizen could contest the presidential election according to Clause 31 of the Constitution.
"Gotabaya took citizenship in America and gave up his citizenship in Sri Lanka. In order to occupy a state position he needs to be a Sri Lankan citizen. The process he followed to get citizenship in Sri Lanka after his brother became President in 2005 is fraudulent," he explained.

Meanwhile, Senasinghe told the media that the Rajapaksas were engaged in a double act by trying to use nationalism and extremism to secure political power.

"Mahindananda has said that Gotabaya's votes stand at 10 percent and has promised to build a Muslim school near the Dalada Maligawa if his vote base is lifted to 25 percent. On the other hand, promises have been made to Hisbullah that as separate Muslim administrative body would be set up in Kattankudy," he claimed.