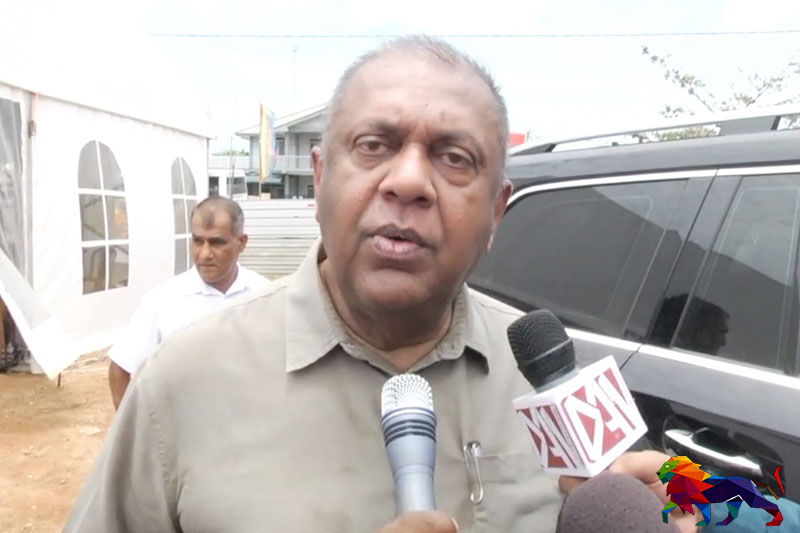 Minister Mangala Samaraweera claims that the news alleging that a majority of UNP stalwarts had requested the party’s Presidential candidacy to be handed over to Ranil Wickremesinghe and for the Premiership candidacy should be given to Sajith Premadasa was totally false. The Minister alleged the news had been planted in the media by stooges of ‘Prodabaya Rajapaksa’.

The Minister made this statement to media while attending the Enterprise Sri Lanka National Exhibition on Saturday (07) at the Jaffna Muttraveli ground. The Minister visited the ground to observe the preparations for the event which was inaugurated by Prime Minister Ranil Wickremesinghe later in the day.

Stating that the Pohottowa party’s candidate was a fraud, the Minister gave him a new moniker by calling him ‘Prodabaya’. The Minister answered a number of questions put to him by the media.

“Enterprise Sri Lanka is not a place to talk about politics but I must clearly state that reports that the ‘Presidential candidacy for Ranil’ on newspapers and social media have been planted by Prodabaya Rajapaksa’s stooges. This is fake news.

This is because Prodabaya Rajapaksa or Gotabaya is an individual who does politics in devious ways. It is an attempt by his stooges to show that there are internal issues within the UNP which in fact has no truth in it.

Though I was not at the said meeting as I was in Jaffna, however, all senior Ministers who attended assured me that not even the Prime Minister made any such claim.

At a time when no such thing has been said, and two-thirds of our party MPs want Sajith Premadasa as the candidate, these attempts only show that the propaganda campaign of Gotabaya has collapsed.

We know this was news that was planted by them. I reiterate to the people of this country, two-thirds of our MPs, 52 of 76 have already signed asking for Sajith Premadasa.

And of the people of this country, I think we saw five out of six in Badulla, we saw in Matara, we saw in Kurunegala. Even on my travels to Jaffna, we saw that people are asking for him. When the party has made a decision with a two-thirds majority calling for Sajith, it's funny to claim that this decision was made.

“And I am sure that Sajith Premadasa will definitely be the next presidential candidate of this country with the support of the Premier and our Speaker Karu Jayasuriya. No one can stop him from being President,” the Minister said.

Amidst more questions from journalists, the Minister continued to respond.

But doesn't the UNP working committee decide that?

“That's why the Working Committee is made up of MPs. Two-thirds of MPs have said that. That is why we say this decision should be taken not by those who support Gotabhaya. The decision will be taken at a meeting of the working committee and the parliamentary team. ”

Q :But some say the UNP has split in two?

"No. The UNP has not split or will not split. Because when ninety-five have one opinion, five more say no, and if they break, it is those five, not the ninety-five. The whole party is of the same opinion," Samaraweera said.