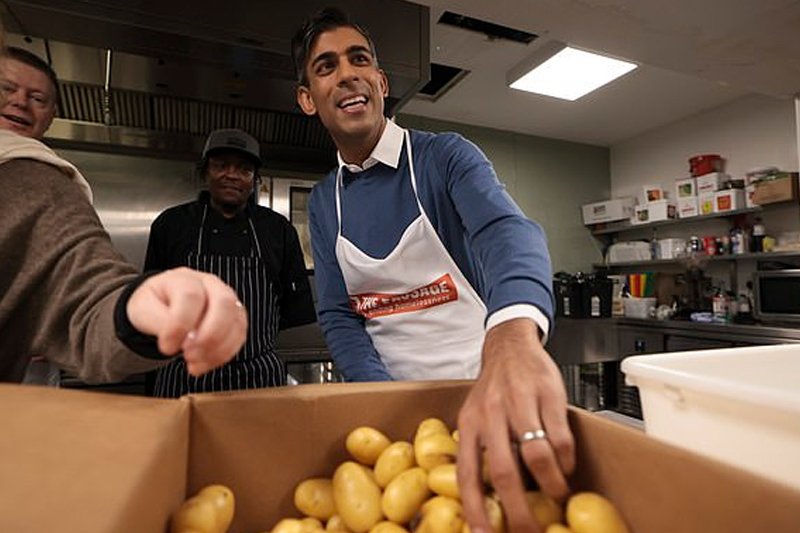 Rishi Sunak has been filmed awkwardly asking a homeless man if he works in business as he served up food at a shelter ahead of Christmas.

The Prime Minister visited a homeless shelter in London run by the Passage on Friday.

In footage while serving breakfast to people, Sunak was asked by one man called Dean: 'Are you sorting the economy out?'.

'That's exactly what I'm trying to do,' the Tory party leader responded, before asking the man if he works in business.

Dean then said he was interested in business, prompting Sunak to ask him what kind of business.

When Dean replied finance, the Prime Minister said: 'I used to work in finance, actually.'

Sunak then asked: 'Is that something you'd like to get into?'

'Yeah I wouldn't mind. But, I don't know, I'd like to get through Christmas first,' the homeless man said.

Sunak continued: 'What's your plan, what are you doing this weekend?'

Dean replied that he was hoping the homeless charity St Mungo's could help him get into temporary accommodation 'so I'm not on the street'.

Another Labour MP, Bill Esterson, said the exchange demonstrated Mr Sunak was 'out of touch'.

Yesterday, Sunak posted a photo of his visit on Twitter, along with the words: 'For too many people, the opportunity to celebrate Christmas in a warm and safe environment is beyond reach.

'Words are not enough. We are investing £2 billion to give some of the most vulnerable people a roof over their heads, with targeted support to rebuild their lives.'