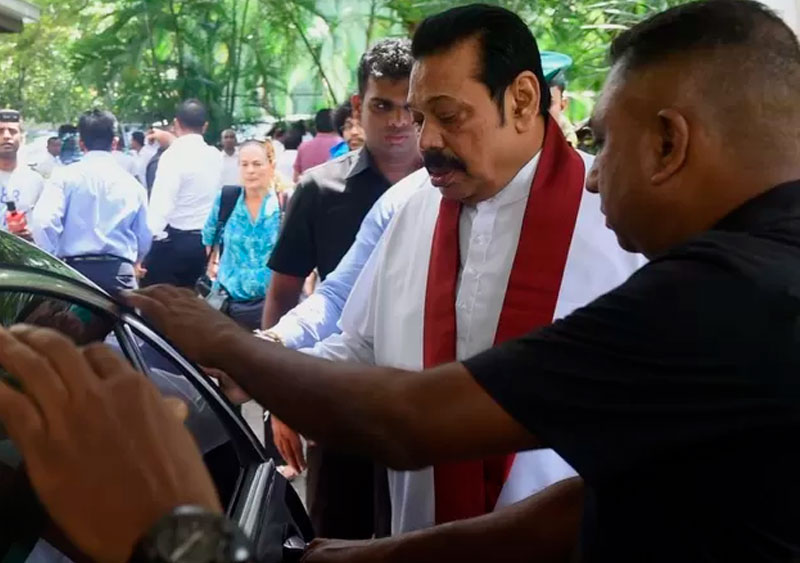 A tense situation occurred in Nawalapitiya town today (16) when the SJB held a protest as the SLPP was to hold a public rally.

Displaying placards, the demonstrators demanded the government to reduce commodity prices and to return their swindled money.

An ASP told them that they were having an illegal assembly and ordered them to disperse.

As the situation heated up, SJB’s organizer for the area Sasanka Sampath, two local government members and 12 others were taken into custody.

As they were being taken in a bus, one protester said they were estate workers and asked how they could provide for their families.

In the meantime, former president Mahinda Rajapaksa led a SLPP rally there under the theme ‘let’s rise up together’ that was organized by Mahindananda Aluthgamage, the party’s organizer for Nawalapitiya.

Addressing the event, Rajapaksa said they were prepared to face any election.

He admitted that there were instances when they had gone wrong, but said however, his party would win any election if it was held even today.

Aluthgamage told the gathering that they were well prepared and asked the president to hold elections, be it the local government or the parliamentary polls.

Namal Rajapaksa too, spoke here, and called for legal action if anyone is in the wrong, without calling everybody crooks.

“Many said the Rajapaksas had black money. And that we gave our black money to that elder sister in Colombo. But, everybody else except us are in the list of those who gave her money.”

SLPP general secretary Sagara Kariyawasam countered numerous allegations that they were slaves, and said persons who have been bought were behind this organized social media campaign.

Another attempt by SLPP crooks to rise up – Sajith

Meanwhile, opposition leader Sajith Premadasa said the defeated gang of SLPP crooks are today trying to rise up again by making use of the bridge built for them by president Ranil Wickremesinghe.

People elect a president on the basis of his plan to build the country, but the incumbent was elected by the SLPP MPs on three conditions.

Granting them compensation for their torched houses, personal protection and contracting the election map for four years are their conditions which the president is fulfilling today, Premadasa charged at a SJB meeting in Polgahawela.

It is an irony of fate that the defeated SLPP gang is holding a rally on world food day today to rise up again in the very electorate represented by the minister who destroyed the farmers and left the people hungry.

They were holding the rally after the police surrounded the SJB office and arrested its members, he said, adding that he too, would attend a rally in Nawalapitiya later in the day.