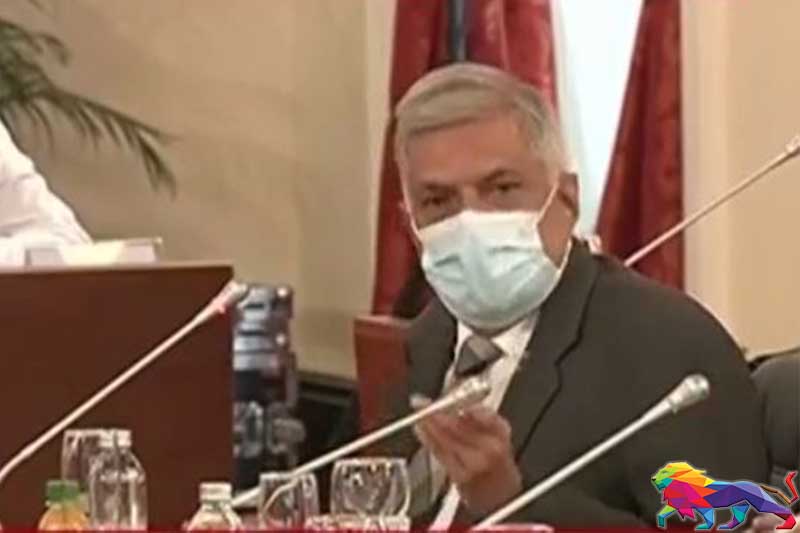 Former Prime Minister Ranil Wickremesinghe called on the government to initiate discussions with all parties in Parliament in order to arrive at a national consensus so that a new programme of recovery can be started.

Mr. Wickremesinghe made these comments at the All-Party Conference held today (23) under the patronage of President Gotabaya Rajapaksa at the Presidential Secretariat.

All parties currently represented in Parliament were invited to attend the All-Party Conference that was convened on a proposal made by the Sri Lanka Freedom Party.

However, several parties had decided not to attend the All Party Conference.

After President Rajapaksa invited Central Bank Governor Ajith Nivard Cabraal to brief on the current economic crisis, the Governor went on to blame the former Yahapalana administration for the crisis.

The former Prime Minister, however, disputed the CBSL Governor's claims and pointed out that it would be a futile exercise to convene an All-Party Conference if they only planned to get into narrow political conflicts at the very outset.

"I'd like to clarify one fact. This All-Party Conference is being convened on a proposal made by the SLFP. Minister Nimal Siripala De Silva met me personally and extended an invitation. I was under the impression that this was going to be important. We came here because of the dire situation the country is in. We didn't come here to discuss who was responsible and to engage in a blame game," he said.

Sri Lanka wouldn't face these issues if it weren't for Vijaya

"We didn't come here to pursue a narrow political agenda. However, the Governor started the proceedings by blaming the former administration. What would happen if I were to answer that? Will he offer a rebuttal? This will only end up with King Vijaya. If he didnt come, we wouldn't end up here. Why should we stoop to such a level?

I can only state that we followed a different set of policies. Back then, the public could eat and drink. There was enough fuel. I'm not going to say anymore than that," the former Premier said.

President Gotabaya Rajapaksa had then intervened and apologised to Ranil Wickremesinghe.

"I would like to apologise for the comments. I think he made these comments as the (crisis) is a result of the methodology that was followed all these years. That is why I said at the outset that this is not a political issue. We are here to get everyone's opinions on how to resolve the current crisis," the president said.

The Government’s economic policies during the last two (2) years have seen a reversal of the free-market economy which created a large middle class.

The distortions in the free-market economy resulted in the interruption of the production, distribution and consumption of goods and services.

Our agricultural production has dropped, which has had an impact on the processing industry.

We are seeing nearly 25% of Small & Medium Enterprises shutting down due to these policies.

The country is facing widespread unemployment and a rising cost of living which has seen increasing hunger and malnutrition. The country’s debt to GDP ratio has risen to 119%.

It will take at least 5 years for Sri Lanka to emerge from this crisis. The two issues we face are to stabilise the economy in the next 2 years and to consolidate economic recovery.

The reversal of economic policies has shaken the confidence among both the foreign and local investors.

This has resulted in many of our youth leaving the country.

The only way to reverse the damage is if there is a consensus regarding the principles in relation to the country’s economic policy. Political parties must operate within this framework.

The parties in Parliament must reach a national consensus on the short-term, medium-term, and long-term policies for the country.

This must be an open dialogue, where the Government should take the lead while the Opposition must be ready to respond.

To date we have not seen any transparency or commitment from the Government. They have failed to provide us with the relevant data nor have they tabled the full IMF report in Parliament.

In the short-term we must work together to stabilise the economy, otherwise the people will lose confidence in the country.

The country is faced with two immediate tasks: dealing with our foreign exchange deficit and rescheduling our foreign debts.

This will be the first time that a government will have negotiated the scheduling of foreign debt.

There are people in the Central Bank and the Ministry of Finance who can deal with the IMF in regards to the Extended Fund Facility. But there is no one who has the experience in rescheduling debt. We must obtain two leading firms who can provide the expertise in the financial and legal sphere. We also require the services of experts in financial analysis.

The Government must specify the selection criteria, and involve all political parties in Parliament. This cannot be left in the hands of an individual.

Monthly reports from the Ministry of Finance must be presented to Parliament. New legislation will be required to enact a supervisory role to Parliament over the Central Bank to prevent the arbitrary deficit financing that is currently in place.

The new exchange rates have brought about pressure on the banks. Private banks are currently holding vast sums of dollar loans, while state banks are carrying large foreign debt of several State-Owned Enterprises.

There is a question over the balance sheets of the banks due to the conversion of dollar loans at the present exchange rate. The banking sector is on the verge of collapse, the Government must ensure that a safety net is enacted for the banks to prevent a collapse.

The price adjustments resulting from the Government’s economic policies have placed a huge burden on the people. Therefore, it is essential that relief is provided to the public.

The IMF has also recommended “a credible and coherent strategy to restore macroeconomic stability and debt sustainability, while protecting vulnerable groups and reducing poverty through strengthened, well-targeted social safety nets.”

The 2022 Budget is no longer relevant for the country. At this time of crisis we must re-evaluate the non-essential expenditure and ensure that relief is provided to the public. 2022 will not be a year of development, but instead this must be a year of relief.

Negotiations with the IMF will take a minimum of six (6) months, while the relief benefits from the Indian Credit Lines will not go beyond mid-May. The Government must find funding for the remaining four months, until an agreement with the IMF and International Sovereign Bond holders is reached.

Only one option left

We have only one option, and that is to approach a few friendly nations who can form a consortium and request financial assistance and help implement a new economic plan.

These countries must include India, Japan, China, and the European Union (EU) who will work alongside the IMF.

We had a similar consortium between 2002 and 2004 when the economy had collapsed and we were undergoing peace talks.

Our relationship with these countries are strained, and this is mainly self-inflicted. The Government decided to cancel several investment projects with India and Japan, these must be resolved.

Similarly, this Government has brought about issues with China which must be addressed.

Sri Lanka’s issue with the EU is related to the Human Rights Council in Geneva. Those concerns must be dealt with.

Immediately, measures must be taken to improve relations between Sri Lanka and these countries. If the Government can do so, then we will see an increased confidence in the country that will encourage greater levels of foreign investment.

Article 148 of the Constitution has vested control of public finances in Parliament; however, the Parliament has so far been ignored. I call upon the Government to ensure that Parliament is informed of all developments, while all relevant reports are made available.

The committees of public finance including COPE and COPA must be strengthened.

Similarly, the Minister of Finance must take upon himself the responsibility of addressing Parliament monthly in regard to the present situation. If necessary, a Parliamentary Committee should be formed for consolidating this activity.

The President and his Government must take Parliament back into their confidence, otherwise they will lose the confidence of Parliament.

The Government must initiate discussions with all Parties in Parliament, regardless of if they are present or not today.

It is of utmost importance that we all reach an agreement so that a new program of recovery can be started.