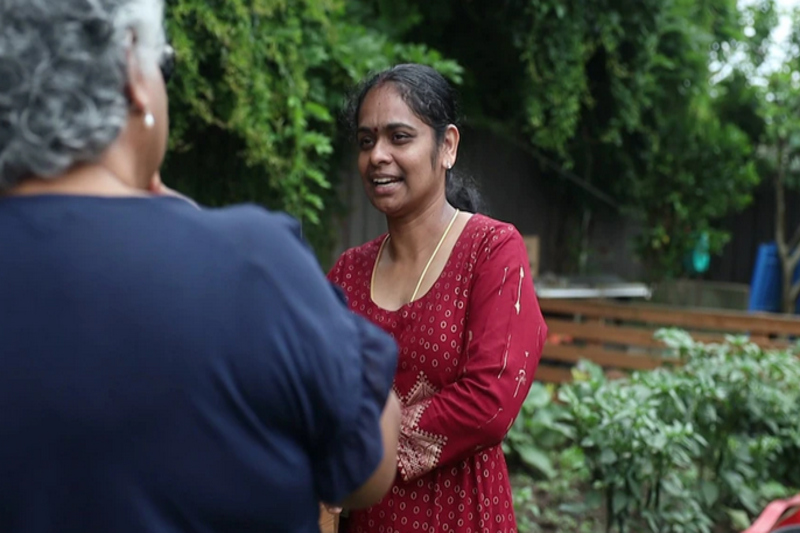 It's been more than a decade since the Sri Lankan civil war but for Kohilla Sandrasegaram the trauma from the brutal conflict remains vivid.

"If I hear cars driving very fast or if I see men wearing different kinds of clothing, without knowing my body starts shaking and I become very scared," Ms Sandrasegaram said.

The 37-year-old Tamil refugee fled Sri Lanka in 2007 before making a new life for herself in Toongabbie in Sydney's west.

The mother-of-two said she's still haunted by her experience of the decades-long conflict, which includes being kidnapped, severely beaten and held for ransom for more than two weeks.

"I was 21-years-old at that time. They beat me and took my gold chain, bangles and the watch l was wearing and also my books … I was imprisoned in a disused and depleted house," she said.

But thanks to a new community program for Sydney's Sri Lankan refugees and asylum seekers, she no longer feels alone in her pain.

The Companion Program run by volunteers from Tamil Resettlement and Community Konnect (TRACK) links victims of the war with community elders. Thava Seelan, who launched the initiative last year, said the aim of the program was to build connections with vulnerable members in the community who often feel they have limited support networks in Australia.

"A lot of people don't even feel secure here because they are not supported by any community, so they are completely isolated in a new country, a new system — everything is new and the language barrier is there too," Dr Seelan said.

The local GP, who fled the conflict in the late 80s, has made it his mission to help others in the Tamil community piece their lives back together.

"The program is very close to my heart. When I deal with these people when they talk about the stories they have been through, I actually understand how they feel," he said.

Ms Sandrasegaram said connecting with her companion Viji Dhayanathan had been life-changing.

"If I am depressed or find life difficult, I talk to Aunty Viji and then I feel confident and uplifted." For Ms Dhayanathan, it's a chance to use her cultural understanding and Tamil language to help those in her community affected by war.

"Many of the asylum seekers are alone here. They have no family or they have left their family back at home," Ms Dhayanathan said.

"I wanted to do something about that … just to give them support. I don't think any human being should feel that no one cares for them in this world."

Each week the retired teacher checks in with Ms Sandrasegaram, dropping by her house or simply giving her a call.

"With me she opens up because she feels like I'm her mother so she confides in me things that probably she may not talk to other people about," Ms Dhayanathan said.

The 72-year-old admits that initially it was difficult to connect.

"I used to call her [Ms Sandrasegaram] many times but she didn't pick up the phone. When I left messages, she didn't call back so it took months and months to connect with her," she said.

"She was going through a lot of depression and of course PTSD on top of that so she just didn't feel like talking to anybody.

"I could have just given up and gone and asked them to give me somebody else but I persisted and I'm really happy I did that because we have this lovely connection now." Anglicare's David Ip says the programme, which the charity helps to support, has been a big success in the Sri Lankan community and could be expanded further.

"Companionship is a great way for people to recover and ensure their long-term wellbeing and we would like to really see this model replicated across many ethnic communities here in Australia," Mr Ip said.

Through the program, Ms Sandrasegaram is glad to have made a lifelong friend.

"I feel she will become part of my family. I feel like she is my mother."