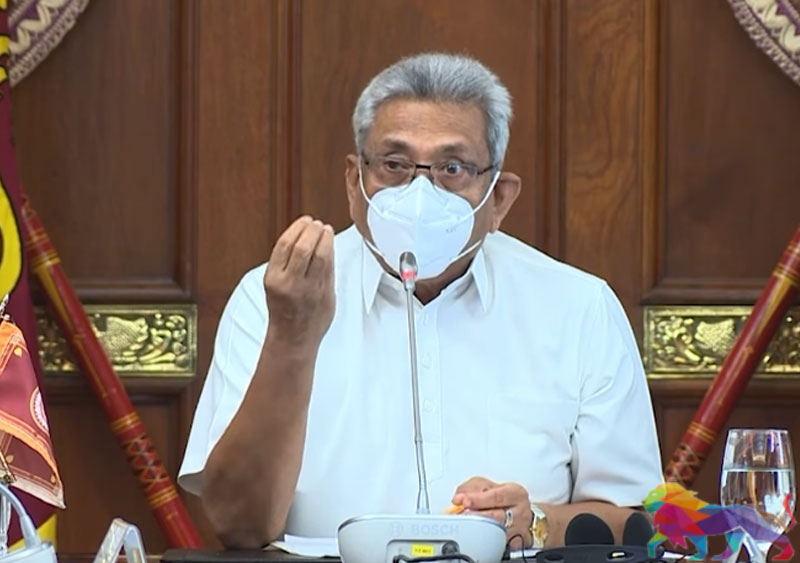 President Gotabaya Rajapaksa has said that despite the challenges posed during the transition period, people’s representatives should move forward to implement the decision to use organic fertilizer as it is beneficial to the people.

He reiterated that the government must ensure the right of the people to access a non-toxic and balanced diet as envisioned in the “Vistas of Prosperity and Splendour” National Policy Framework in order to produce a healthy and productive citizenry.

President Rajapaksa made these observations during a meeting held with the Chairmen of the District Development Committees at the Presidential Secretariat, yesterday (07), the President's Media Division said.

Despite attempts to create a shortage, sufficient fertilizer has been imported until next season, the President said, noting that all cultivation activities can be carried out without any hindrance.

He said that the government has taken measures to ensure that only organic fertilizer would be used in the agriculture sector in the country in the future.

President Rajapaksa emphasized that the programme should be implemented for the benefit of future generations, notwithstanding criticisms from some sections of the society.

He noted that the move towards organic agriculture is not a sudden decision by the government.

"The government’s position on this was clearly set out in the “Vistas of Prosperity and Splendour” policy statement as well as in the last budget. But the failure to apprise farmers in this regard has led to create an undue fear among farmers," he said.

He pointed out that there is great potential in Sri Lanka for organic fertilizer based agriculture. The President also stated that it is the policy of the government to provide maximum relief to the farmers to manage the difficult situations they face during the transition period.

He further noted that due to the inclination of the farmer to use chemical fertilizers for several decades, it has resulted in an increase in the number of people living with non-communicable diseases.

Minister Douglas Devananda, Secretary to the President P.B. Jayasundera and a group of Ministry Secretaries were also present at the occasion.