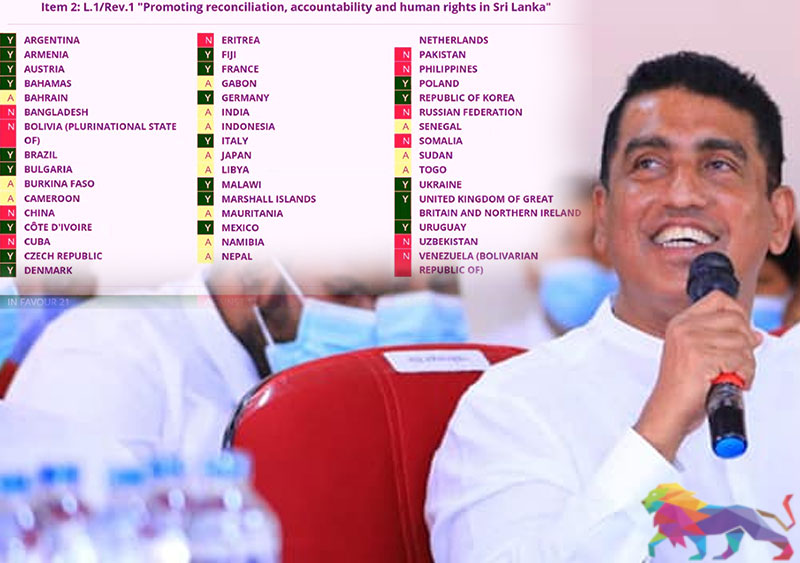 14 member states including India and Japan, who had abstained from voting on the United Nations Human Rights Council (UNHRC) resolution on Sri Lanka in Geneva on Tuesday (23), was an indication that the incumbent government’s attempt to turn the tide in favour of Sri Lanka in the international arena was somewhat fruitful, Chief Government Whip and Highways Minister Johnson Fernando said on Wednesday (24).
Commenting on the UNHRC resolution during a meeting with journalists at the Ministry of Highways, Fernando said that the good work the government has done to win the international community’s support was evident as the majority of countries out of the 47-member council with voting powers had either voted with Sri Lanka or abstained from voting for the resolution.

He observed that 11 nations including Pakistan, China and Russia had voted for Sri Lanka while 14 others had abstained by not voting against the country. He said that this was an indication that the majority of countries have rejected the unwarranted and unjustified interference by a group of western nations in our internal affairs.

"All Asian nations stood in support of our country. This shows that we are on the right path to winning the opinion of the international community,” Minister Fernando said.

The Minister reiterated that the resolution was “unwarranted, unjustified and in violation of the relevant articles of the United Nations Charter."

“Our heroic armed forces militarily neutralized the LTTE in 2009 after three-decades of conflict. The Government acted in self-defense to safeguard the unitary state, sovereignty and territorial integrity from the world’s most ruthless separatist terrorist organisation. It has all the rights to do so because the LTTE was the only terrorist organisation in the world which has killed two world leaders: a serving President of Sri Lanka and a former Prime Minister of India extending its terror beyond the borders of Sri Lanka," he said.

He noted that the members of international community should not forget the fact that the end of terrorism guaranteed the most cherished of all human rights - the right to life of all Sri Lankans – Sinhala, Tamil, and Muslims.

"Several Western countries colluded against our motherland in bringing an unsubstantiated resolution against Sri Lanka. Those nations should keep in mind that they are acting not against a government but against the aspirations of people in this country who have given us a mandate against UN resolutions. The Yahapalana government, in a manner unprecedented in human rights fora, joined as co-sponsors of Resolution 30/1 which was against our own country. We pledged to withdraw from co-sponsorship of that resolution when we campaigned for the last general election and sought people’s approval for that. They gave us a resounding victory. The rejection of this resolution by the people of this country was clearly manifested in the mandate received by President Gotabaya Rajapaksa in November 2019. Based on this mandate, we withdrew from co-sponsorship of the resolution," he said.

"Several countries working against Sri Lanka tabled another country-specific resolution. Those are the very same nations that had attempted but failed to save the LTTE during the last phase of war against terrorism. Their actions will result in a significant loss of morale among countries engaged in the struggle against terrorism," he added.