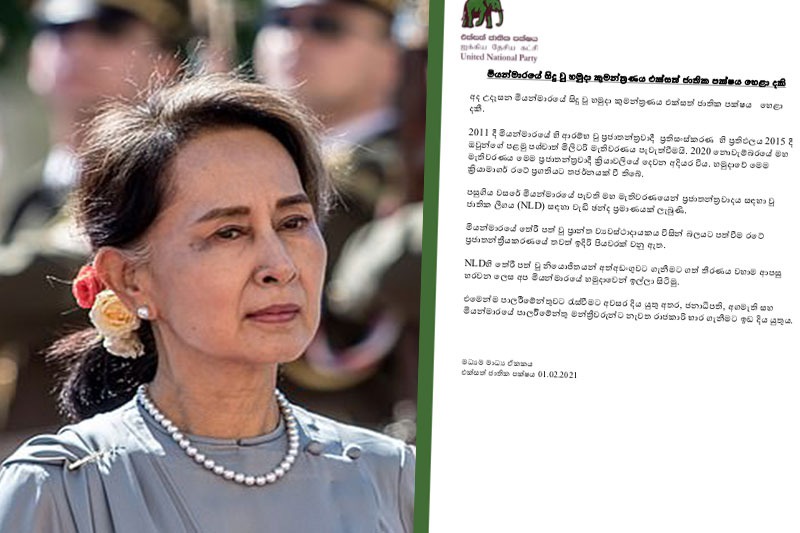 The United National Party (UNP) has condemned the military coup that took place in Myanmar on Monday morning.

In a statement today (01), the UNP said that the military has threatened the progress of democratic reforms of Myanmar.

"In 2011, the democratic reforms in Myanmar began with the country holding their first post-military elections in 2015. The November 2020 General-Elections was the second phase of this Democratic process. The actions of the military have threatened the progress made in the country.

Last year’s General Elections in Myanmar saw an overwhelming majority of the populace vote for the National League for Democracy (NLD). The assumption of office by Myanmar’s elected state legislature would have been another step forward in the democratisation of the country," the statement said.

The UNP urged the Myanmar military to immediately reverse their decision to arrest the elected officials of the NLD.

This is important for us - Kusal Perera

Meanwhile, veteran political analyst and senior journalist Kusal Perera posted the following note on his Facebook page regarding this incident.

As of Monday morning, the military leadership in Myanmar is back at work.

They have arrested Aung San Suu Kyi and a number of leaders of her government who came forward to defend democracy during the massacre of Rohingya Muslims. The military has taken over the country by 3 am.

The new administration of US President Joe Biden has expressed 'grave concern' and has issued a statement calling for the immediate release of the detained leaders.

This is important for us too.

So let's see if these things will happen immediately....

US calls on Myanmar military to release detained leaders

He said that the US expressed "grave concern and alarm" over reports of the detention of government officials and civil society leaders.

"We call on Burmese military leaders to release all government officials and civil society leaders and respect the will of the people of Burma as expressed in democratic elections on November 8," he said.

"The United States stands with the people of Burma in their aspirations for democracy, freedom, peace, and development," he added.