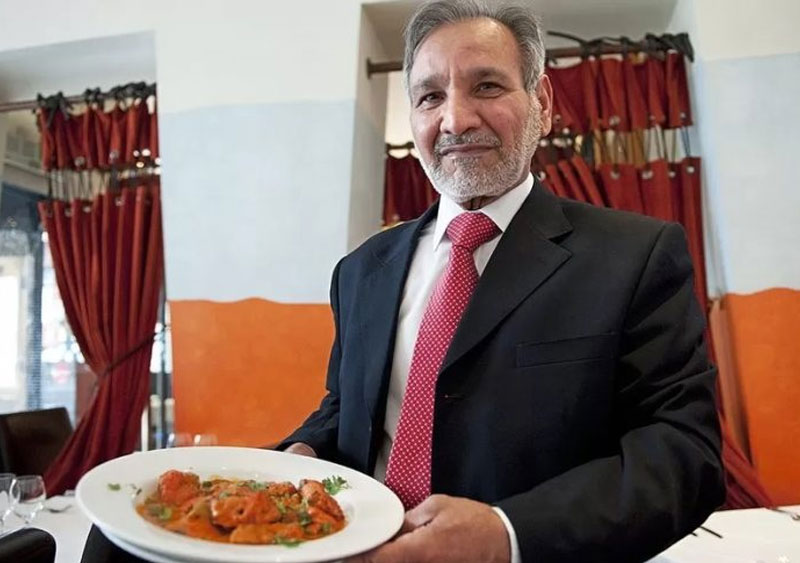 A chef from Glasgow, Ali Ahmed Aslam who is credited with inventing the 'chicken tikka masala', has died at the age of 77.

Ali Ahmed Aslam's death was announced by his Shish Mahal restaurant in Glasgow, which closed for 48 hours as a mark of respect, reported The Guardian.

The eatery announced: “Hey, Shish Snobs … Mr Ali passed away this morning … We are all absolutely devastated and heartbroken.”

He invented the dish by improvising a sauce made from a tin of tomato soup at his restaurant Shish Mahal in the 1970s.

In an interview with AFP in 2009, Ali said he came up with the recipe for chicken tikka masala after a customer complained that his chicken tikka was too dry.

"Chicken tikka masala was invented in this restaurant, we used to make chicken tikka, and one day a customer said, 'I'd take some sauce with that, this is a bit dry'," Ali said.

"We thought we'd better cook the chicken with some sauce. So from here, we cooked chicken tikka with a sauce that contains yogurt, cream, and spices."

The dish went on to become the most popular dish in British restaurants.

Although it is difficult to prove definitively where the dish originated, it is generally regarded as a curry adapted to suit Western tastes.

Ali said the chicken tikka masala is prepared according to customer taste.

"Usually they don't take hot curry, that's why we cook it with yoghurt and cream," he said.

Supporters of the campaign to grant the dish protected status point to the fact that former foreign minister Robin Cook once described it as a crucial part of British culture.

"Chicken tikka masala is now a true British national dish, not only because it is the most popular, but because it is a perfect illustration of the way Britain absorbs and adapts external influences," Cook said in a 2001 speech on British identity.

Ali, originally from Punjab province in Pakistan, moved with his family to Glasgow as a young boy before opening Shish Mahal in Glasgow's west end in 1964.

He said he wanted the dish to be a gift to Glasgow, to give something back to his adopted city.

In 2009, he campaigned unsuccessfully for the dish to be granted "protected designation of origin" status by the European Union, alongside the likes of Champagne, Parma Ham and Greek Feta cheese.

MP Mohammad Sarwar tabled a motion in the House of Commons in 2009 calling for EU protection.