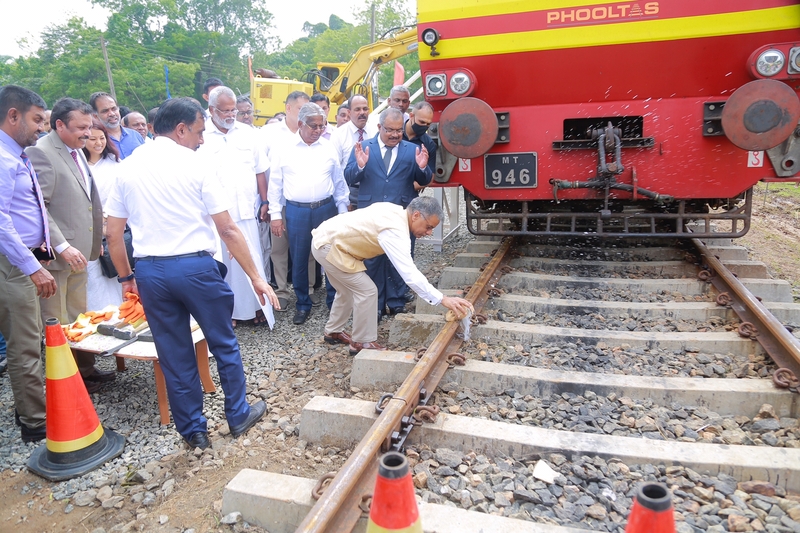 The project is being undertaken by an Indian Public Sector company, IRCON, under an existing Indian Line of Credit (LOC) of USD 318 million at a cost of USD 91.27 million.

Appreciating the work done by IRCON in Sri Lanka in the past few years, the Transport Minister called for greater Railway cooperation between the two countries and thanked India for the support extended to Sri Lanka, especially in the transport sector.

The High Commissioner highlighted that India has executed projects of over USD 1 billion in the Railways sector under 5 Indian LOCs. In addition, projects of about USD 180 million are either ongoing or in pipeline under existing LOCs. He underscored the importance of modernization of Railways in enhancing mobility of goods and services in Sri Lanka thereby boosting economic activity.

The High Commissioner also stressed the importance of strengthening connectivity internally as well as with India for enhancing pilgrimages, tourism, trade and economic benefits for the people of both countries. He stated that India will work with Sri Lanka to introduce green and sustainable transport solutions.

As a long-standing development partner of Sri Lanka, Government of India has executed several projects in Sri Lanka under its concessional loans and grant schemes. Of the different sectors of cooperation under these facilities, the upgradation and modernization of Sri Lankan Railways has been one of the priority areas. IRCON started its operations in Sri Lanka in March 2009 and has contributed towards modernization of Sri Lanka Railways by reconstructing the entire railway line network in Northern Province (253 Km) and upgradation of Southern line (115 km). It has also contributed to ensuring safety and reliability through a modern signaling & Telecommunication system on a 330 km stretch of Railway line.