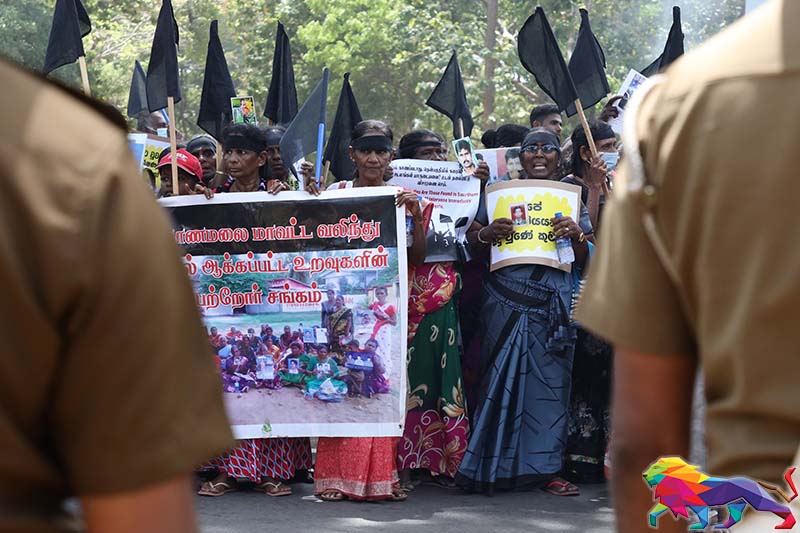 The United Nations has said the Sri Lankan government has taken steps in the right direction with regard to missing persons, even as there are calls to the international community to ensure justice for victims of enforced disappearances in both the north and the south.

Tamil women, who are on a fasting for more than 2,000 now, held agitations in the north and the east on August 30, the international day of the victims of enforced disappearances, and asked for an international investigation to determine the fate of their loved ones.

One protest took place in front of the Jaffna office of the UN high commissioner for refugees, where it was stressed that they would not stop until the exiled former president is taken before an international court.

Most of the missing persons in the north are those who surrendered to the military during the final stages of the war.

In Colombo, a group of women from the south searching for their missing relatives, handed over a petition to the UN office and sought Sri Lanka’s inclusion in the upcoming session of the UN Human Rights Council in Geneva.

A report on the country is due to be submitted to the session on September 12 and a proposal is expected to be adopted.

Speaking to journalists, Jennifer Weerasinghe whose son Dilan Jamaldeen went missing during the first Rajapaksa regime, said they could not expect justice going by what the government is doing now.

Admiral of the Fleet Wasantha Karannagoda and several other Navy officers stand accused of having abducted Jamaldeen and 10 other young men from Colombo, tortured them at an underground cell at the Trincomalee Navy camp and made them disappear.

Convener of the association of relatives of missing persons Britto Fernando said no successive government, with blood in all their hands, was interested in finding the fate of the missing persons.

In a strong criticism of the Office of Missing Persons (OMP), he said despite the OMP’s claims of having conducted around 2,000 investigations, none of those present at the protests had been summoned for an inquiry despite their complaints.

The OMP, formed by Ranil Wickremesinghe five years ago when he was the prime minister, and chaired by president’s counsel Saliya Peiris, has failed to reveal the fate of a single missing person.

However, in a statement to mark international day of the victims of enforced disappearances, UN resident coordinator Hanaa Singer-Hamdy said, “by signing the International Convention for the Protection of All Persons from Enforced Disappearance (ICPPED) in 2015, Sri Lanka took a first step in that direction, recognizing the right of families to know the truth regarding the circumstances of the enforced disappearance, the progress and results of the investigation, and the fate of the disappeared person.

The Office on Missing Persons (OMP) was another such step in the right direction and the ‘List of Complaints and Information Regarding Missing and Disappeared Persons’ received and published by the OMP offered a useful baseline against which to measure progress in clarifying cases.”

More needs to be done to win the confidence of the families of victims and provide credible processes for addressing their grievances in accordance with international standards, she said.

In other protests in Mannar, Vavuniya, Batticaloa, Kilinochchi, Ampara and Trincomalee too, the call for international mediation was repeated.

In Mullaitivu, Tamil women in a protest procession to Pudukudirippu town demanded the government immediately withdraw the military from their areas.

Several members of the Colombo-based Committee into disappearances too, joined the agitation and expressed their solidarity by displaying placards calling for freedom for political prisoners, a merger of the north and the east and a devolution of powers etc.