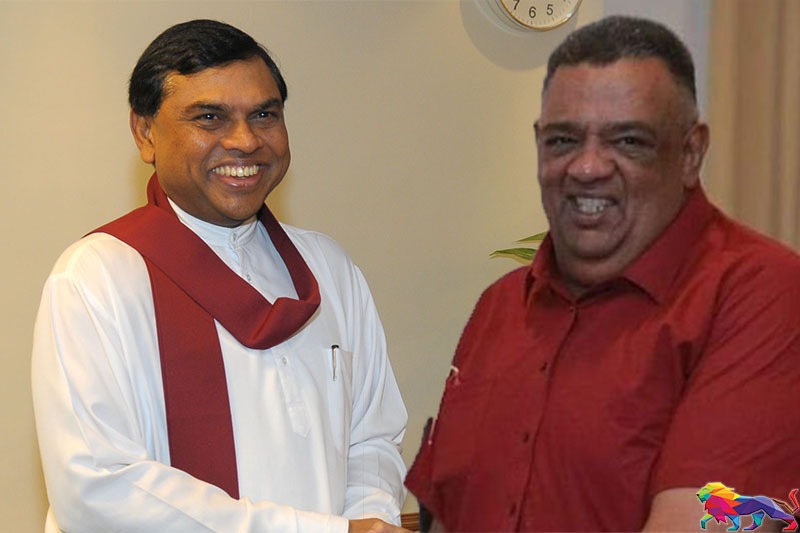 SLPP National Organiser Basil Rajapaksa's entry to parliament has deepened the rift between certain factions within the ruling alliance, it is learnt.

There is strong opposition within the party for requesting SLPP national list MP Mohamed Marjan Faleel to resign in order to make way for Basil Rajapaksa, government sources said.

The sources added that the Muslim MPs usually sought Marjan Faleel to air their grievances since Justice Minister Ali Sabry has been inundated with official duties.

In this backdrop, attempts made to remove Marjan Faleel has come under heavy criticism from not only the Muslim MPs aligned to the ruling alliance but from prominent Muslim businessmen with close ties to the Rajapaksa family.

Although the Muslim community views Basil Rajapaksa as someone who is sensitive to minorities, especially among the Rajapaksas, there are serious doubts within the community as to whether Basil is targeting a Muslim parliamentarian in this manner to appease the Sinhala-Buddhist nationalists within the government.

Concerns have been raised within the Muslim community as to whether Basil Rajapaksa, who is preparing to make a run for the 2024 presidential election, is resorting to such a move to address to the Sinhala-Buddhist voter base.

Contrary to media reports which stated that several SLPP national list MPs have agreed to vacate their seats, most MPs haven't been favourable to such a move.

According to government sources, SLPP national list MP Jayantha Weerasinghe PC was supposed to step down to make way for Basil Rajapaksa to enter parliament after which he would be appointed as Sri Lanka's High Commissioner to Australia.

Weerasinghe was part of the team that had offered legal advice to the Rajapaksas during the former good governance administration and was appointed through the national list for services rendered to the Rajapaksa family. However, when he was requested to resign, he had declined the offer stating that he doesn't wish to head a diplomatic mission, it was reported.

Unable to secure a commitment from Jayantha Weerasinghe, the focus had then centered on another national list MP, Prof. Ranjith Bandara, who would be appointed as the Governor of the Central Bank for vacating his seat. However, due to strong opposition from President's Secretary P.B. Jayasundera, that move had also been scrapped, informed sources said.
'Don't resign' - PM tells Marjan

After being summoned to Temple Trees last week, MP Mohamed Marjan Faleel has had a cordial discussion with Prime Minister's Secretary Gamini Senarath, Additional Secretary Chaminda Kularathna and SLPP General Secretary Sagara Kariyawasam where they have requested him to step down from his seat to make way for Basil's entry to parliament, it was reported. They had also promised to give anything Farjan seeks in return for vacating his seat.

However, he had instead sought an appointment with Prime Minister Mahinda Rajapaksa. According to informed sources, the Prime Minister had told him not to vacate his seat.

"You don't need to resign. Basil appointed 7 individuals who can be removed anytime. One of those MPs will resign. I appointed you to the national list. Besides, If we remove you, the Muslim community that supports us will hate us instead. So don't resign,"  the Prime Minister added.
Furthermore, a head of the Prime Minister's personal staff had also requested Mohamed Marjan Faleel to remain as a parliamentarian.
Close ties to the Rajapaksa family

Mohamed Marjan Faleel is a billionaire businessman who is also a close confidant of Prime Minister Mahinda Rajapaksa. He is the son of Faleel Hadjiar, a prominent businessman in Beruwala.

Faleel Hadjiar was the Beruwala organiser of the Sri Lanka Freedom Party and served as the Mayor of Beruwala for 17 years from 1983 to 1997.

It is notable that both Minister Rohitha Abeygunawardena and State Minister Piyal Nishnatha had been minor employees of Faleel Hadjiar who had eventually laid the foundation for their political careers.

Meanwhile, following in his father's footsteps, Mohamed Marjan Faleel also served as the Mayor of Beruwala from 1997 to 2002.

Milfar Gafoor, who served as the Mayor of Beruwala from 2011 - 2015, is the nephew of Marjan Faleel.

A prominent business family, they are known for spending lavishly on the Rajapaksa clan and have a very close association with the Prime Minister.

When Gotabaya Rajapaksa was announced as the presidential candidate, it was Marjan Faleel and Milfar Gafoor who had organised the first Iftar event in Beruwala. While Faleel Marjan is a close confidant of the Premier, Milfar Gafoor is considered to be a close associate of the President.

Despite winning the Beruwala seat by a small margin at the presidential election, Marjan Faleel played a key role at the last general election as the SLPP won Beruwala by more than 35,000 votes. As such, those within the SLPP who had protested against the removal of Marjan Faleel say that the party is going to remove someone who had always stood by the Rajapaksas.

Basil's entry to parliament in 07'

Ironically, Basil Rajapaksa first entered parliament after the death of a Muslim MP who was appointed through the national list of the People's Alliance.

He was appointed as a parliamentarian by the United People's Freedom Alliance (UPFA) in 2007 for the vacancy created by the sudden death of the non-cabinet minister, Anwar Ismail.

It was reported that the then general secretary of the UPFA, Susil Premajayantha had nominated Basil Rajapaksa as Anwar Ismail's replacement ignoring the recommendation of another member forwarded by the Sri Lanka Muslim Congress.

Be that as it may, Basil Rajapaksa was able to garner the support of the Tamil and Muslim communities during the previous Rajapaksa regime and spearheaded various development projects in the North and the East.

However, with a presidential bid in the offing, he is acutely aware of the importance of securing Sinhala-Buddhist votes over minority votes.

As there are a number of Sinhala-Buddhist MPs who were appointed to the national list by Basil Rajapaksa that can be removed at any time according to his discretion, speculation is rife in local political circles as to whether he is trying to kill two birds with one stone.