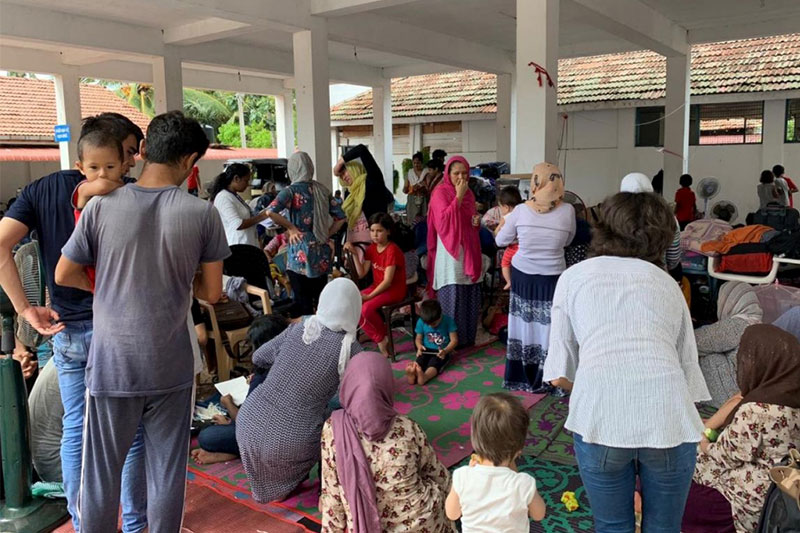 June 20 is World Refugee Day, coinciding with a time Sri Lanka faces its most serious refugee crisis since 2014.

Though not a party to the 1951 Refugee Convention and its 1967 Protocol, Sri Lanka is bound by international customary law and human rights treaty obligations – such as the Convention against Torture and Other Cruel, Inhuman or Degrading Treatment or Punishment (CAT) and the International Convention for the Protection of All Persons from Enforced Disappearance (ICPPED), to which Sri Lanka is a party to – to respect principle of non-refoulment, which prohibits the return of persons to a country when there are substantial grounds for believing that the person or persons would be at risk of harm. This includes risks to right to life, death penalty, torture, sexual and gender based violence, female genital mutilation, prolonged solitary confinement, denial of fair trial, degrading living conditions, lack of medical treatment etc.

The Sri Lankan government has an agreement with United Nations High Commissioner for Refugees (UNHCR) which allows UNHCR to register those seeking refugee status and carry out refugee status determination. According to UNHCR statistics, there are 862 refugees (those who have been granted refugee status) and 829 asylum seekers (those whose refugee applications are pending) in Sri Lanka as of April 30, 2019. Those who have been granted refugee status await permanent resettlement in another country. Between January to April 2019, 26 refugees had departed to Canada and United States of America for permanent resettlement, but I’m also aware of several refugees who have been stuck in Sri Lanka for several years despite being granted refugee status. These refugees come from 15 countries in South Asia, Middle East and Africa. 1,362 were from Pakistan and 200 from Afghanistan. Others were from Bangladesh, Eritrea, India, Iran, Maldives, Myanmar, Nigeria, Palestine, Somalia, Sudan, Syria, Tunisia and Yemen.

The majority are Ahmadiyya Muslims, while there are also significant number of Christians and other Muslims. These communities have suffered threats, attacks and killings by extremist groups, with little to no protection from the State against these attacks. A few persecuted human rights activists, journalists, bloggers, atheists and gay persons have also sought refuge in Sri Lanka.

Life as refugees in Sri Lanka

UNHCR provides those recognised as refugees with an allowance of about Rs. 10,000 per person or Rs. 22,000 for family with two or more children, which is not enough to cover even accommodation and food to live in dignity in Sri Lanka. Asylum seekers don’t get any allowance and are left to fend for themselves, with their savings and contributions from relatives, friends and other well-wishers. Among the refugees I have met are medical doctors, journalists, lawyers, government officials, teachers, graphic designers and beauticians. But the Sri Lankan government doesn’t allow refugees to be employed legally, denying them the opportunity to be gainfully occupied and earn an income to cover the costs of their temporary stay in Sri Lanka. In desperation, some refugees had worked in shops and as construction workers, but I have been told several instances where employers had refused to pay them the agreed amounts and they were helpless in claiming what was due to them.  They end up contributing to the Sri Lankan economy by renting our rooms, houses, buying things from our shops, and spending on three-wheelers and buses.

Asylum seekers and refugees are also not absorbed into the government technical education and vocational training systems, which has the potential to help them to learn and develop skills that they could utilise in seeking employment during their stay in Sri Lanka (if allowed to do so) and their countries of resettlement. Government hospitals provide free healthcare, but sometimes refugees have faced hostility in hospitals. There is no psychiatric and psychosocial care made available to them, despite the unfamiliar circumstances they have been compelled to live in, and the trauma they have faced due to the violence and discrimination that had compelled them to leave. Despite the large number of abandoned government buildings across the country, the government doesn’t provide housing. Some landlords have been reluctant to rent rooms and houses to refugees, while others have exploited their vulnerability by charging higher prices. The children are not included in the government’s “free education” policy, and thus, many children are unable to go to school. Refugees are also not included in government programs for food and nutrition security or social security programs such as Samurdhi.

Reprisals and hostility against refugees after Easter Sunday bombings

Along with Sri Lankan Muslims, the small refugee and asylum seeker population, especially around Negombo, bore the brunt of reprisals and hostilities after the Easter Sunday bombings. Some refugees were subjected to physical violence and others faced threats of violence as about two third of the refugee population were evicted from the rooms and houses they were renting. Some house owners were sympathetic towards refugees, but were threatened by mobs and neighbours to evict the refugee families. The majority of those evicted were Pakistani Ahmadiyya Muslims and they sought shelter in two Ahmadi mosques. Others were accommodated in the garage and verandas of the Negombo Police station. Conditions in these three camps during April and May were unbearable, with many including children falling ill, due to severe congestion, lack of shelter in sun and rain, lack of toilets and sanitation facilities. They have been used to cooking for themselves and some found it difficult to adjust to Sri Lankan style food that was provided.

Appeals to the government, Christian churches, Buddhist temples, NGOs and private individuals to find better accommodation didn’t bring positive results. Two facilities run by churches and an NGO respectively were offered in April, but fell apart due to protests by Buddhist monks and others. The Governors of the Southern and Northern provinces offered to renovate facilities in their provinces, and finally, more than a hundred refugees, including children, were moved to a camp in the North in two phases, closing down the camp at the Negombo police station.  The Negombo police must be commended for accommodating, supporting and protecting about 170 refugees, by sharing their minimal facilities.

Many refugees had to leave behind their meagre belongings and basic essentials including clothes, medicine and children’s supplies. Some kind house owners had kept these safely till they could be collected, but I also heard and personally experienced situations where some house owners had acquired some of the properties, sold or disposed them.

Refugees and asylum seekers were also evicted in Kandy and suburbs of Colombo, through written and verbal notices, largely due to the instigation by police and neighbours. It took huge efforts for them to find new accommodation.

Now, nearly two months since the Easter Sunday bombings, life in the three camps remains difficult despite efforts by UNHCR, some government agencies, NGOs and well-wishers. The population in two Ahmadi mosques have decreased from about 1000 to about 700, with some having returned to their original rooms and houses and some having left for Canada and USA. During a visit to one of the camps earlier this week, I observed that facilities, like temporary accommodation and toilets, have improved compared to late April, but families have been separated for nearly two months now at two of the camps, as there are no facilities for them to stay together. Those in the camp in the North are not allowed to move out or have visitors.  In addition to the three camps, some refugees are also detained in an overcrowded detention facility.

In May, a refugee family with 4 children, who had been evicted from their home in a suburb of Colombo, travelled to Jaffna at the invitation of a host family there. The host family registered them at the police on the day of the arrival, but the next day, senior government officials opposed this. The distraught and exhausted refugee family was compelled to travel back to Colombo. But over the last month, a few Sri Lankan families and one church have come forward to host refugee families and some have started to rent their rooms and houses to refugees again.

Supporting and protecting people terrorised in their own countries is a global challenge. Compared to about 28.5 million refugees worldwide, out of which Pakistan is hosting about 1.4 million and Bangladesh is hosting about 900,000, we have a relatively tiny refugee population of about 1700 to care for. About a million Sri Lankans have benefited and still benefit from international protection, though they also face challenges in the countries they are seeking refuge and when they try to return to Sri Lanka.

Sri Lankan politicians, religious leaders, media and civil society must try to raise awareness about refugees in Sri Lanka. That refugees, like citizens and all other foreign visitors coming for tourism, business, studies, sports etc., are subject to the laws of the land. That refugees have rarely been accused of criminal charges. That most refugees coming to Sri Lanka are minorities in their own countries who have been terrorised and had to flee to save their lives. That they are here temporarily till they find permanent resettlement. That they contribute to the Sri Lankan economy and don’t receive even basic assistance like housing, food, education, transport from the Sri Lankan government.

We need to extend maximum support to UNHCR to carry out their mandate and also develop an independent and comprehensive national mechanism to assess well-founded fears of refugees coming to us. We need to consider offering basic needs such as housing, food, employment, education and healthcare to refugees staying with us temporarily and in the long term, consider offering permanent resettlement to at least few refugee families.


We should never stoop so low as to deport, stop or discourage people terrorised in other countries coming to us seeking care, support and protection temporarily. We must welcome them warmly and feel proud that they have chosen to come to us in their time of trouble and desperation. Responding sensitively and humanely to refugees – our brothers and sisters – is a test of our laws, politics, spirituality and conscience.
(Groundviews)