The crisis facing Sri Lanka is now at a critical juncture. If it is not managed properly at this moment, the country is in danger of falling into a deeper and worse abyss than it is now.

If, for some reason, it falls into the next stage of the abyss, Sri Lanka may even be compelled to live in a state of primitivism for a long time.

What Sri Lanka should consider important at the moment is not to find those who have plunged the country into this situation and punish them, but to find a suitable way to overcome the present predicament by preventing it from falling into the second abyss.

In the attempt to overcome this crisis, it is important that the people and the political parties are brought into a common platform where they should work in consensus. But so far, a new party or new leader capable of bringing all the people together has not emerged. Therefore, the best way to unite the people in one common front at this juncture would be to unite all political parties represented in Parliament and coax them to work together as an all-party government.

The formation of a new government consisting of new leaders who are free of corruption and acceptable to the people may be considered the best possible way to overcome this crisis, but it is contrary to the reality that prevails on the ground.

If the ruling party must be removed, it must happen within a constitutional framework.

Hence the “People's Movement for Reforms" has included an early election in the agenda of its reform program to give the people the right to make a quick decision about the current ruling party.

However, it must be stressed that any attempt to overthrow the ruling party in an unconstitutional manner could disrupt the country's ability to resolve the crisis, and it might plunge the country into a state of anarchy of the worst type. 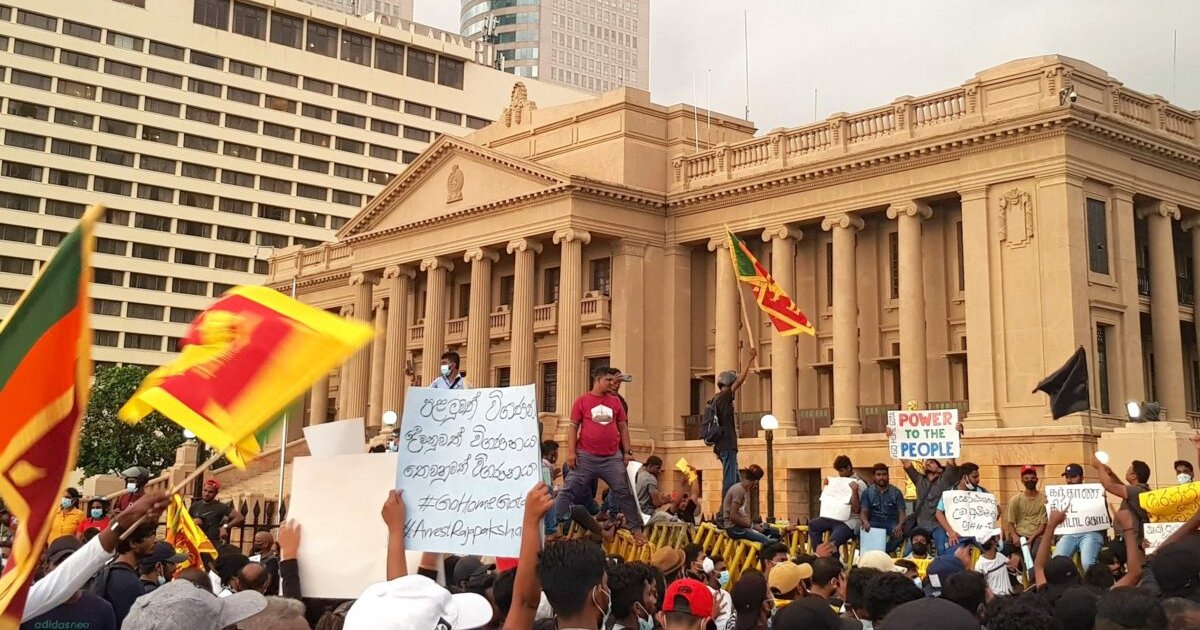 Taking all these factors into consideration the best option to select at the moment, for the good of the country would be to form an all-party government, and persuade the people and the political parties to make a concerted effort to overcome the crisis and orientate the country towards a reform program that will bring about a profound change in the system.

As evident from the discussions we, the People's Movement for Reforms had with the political parties regarding a reform program and the essential need of forming an all-party government for a profound change in the system, it appears that it is not simple or easy task to bring them all together; but it is not an impossible task either.

It is difficult but a winnable hurdle.

Despite the fact that there has been adequate dialogue on the reforms the country needs, there is still not enough concern, hardly any dialogue at all, on the need for a national program that includes policies to better manage the country's crisis until the balance of payments problem is resolved.

The object of this article is to share my views on it.

1).  The public may possess very positive ideas about what could be done to overcome this crisis. The government can immediately initiate a public website to receive the opinions of the public. Then not only the government authorities but also the public will get the opportunity to be aware of the proposals submitted.

2).  It is a welcome sign that the ban imposed on several organizations related to the Tamil Diaspora has been lifted. The Tamil areas in the North and East must be allowed to be developed with their support. It could turn out to be an important source of foreign exchange for the country. At the same time, all lands acquired by the security forces from the people of the North and East should be returned to their owners. Therefore, the rest of the people of the country should realize that if there is a special development in those areas, it will be for the good of the whole country and not of the people living in the North and East only.

3). The country is heading towards a complete collapse in this crisis. The entire system of institutions, both government and non-government, is in a state of collapse, if not all of them. The country does not have the capacity to protect all institutions that are on the verge of collapse at this moment. The best thing that can be done in the strategic sense would be to identify the institutions that are essential for the survival of the country and to act on a policy that gives prominence for their protection.

The number of employees in the public sector that includes public and semi -government institutions, is twice as large as the number required to maintain the public sector. It is a significant factor influencing the failure of Sri Lanka. The present crisis situation should be used as an opportunity to rectify this error. A partial compensation scheme could be introduced for those who lose their jobs in the process and a program could be initiated to allocate government land to those who wish to turn to agriculture. This will help reduce the number of public servants and make the public sector more sustainable.

Also, a policy that discourages the use of high-fuel luxury vehicles for private use should be introduced.

A system should be devised to assess the nature of the functional use of petroleum products obtained by consumers, calculate the amount of fuel requirement for a period of one week, and issue that quantity on a ration system. In doing so, there should be a policy that gives priority for sectors such as public health, production and distribution (farmers, fishermen and manufacturers).

Also, there should be a policy that provides fuel only for one vehicle for households who use more than one vehicle.

As in India, Sri Lanka should move towards a policy of manufacturing and consumption of Biodiesel. (Used vegetable and animal oils, kasippu and caustic soda are the basic raw materials required for the production of biodiesel). The United States and the European Union have acknowledged that blending of 15 percent ethanol with gasoline is an acceptable and viable combination, and it has been recognized in those countries that the combination is environmentally friendly as well. Ethanol can be produced from rice and corn, as well as from pumpkin or garbage.

About 50 percent of the country's import bill is spent on petroleum imports. Emulating the research done on the subject internationally, the Industrial Development Board and the Universities could develop a methodology to produce biodiesel and ethanol of an acceptable standard at home level at a low investment cost and adopt it as a system of consumption for vehicle use.

It can be made a strong new economic source of wealth that generates wealth for the country and also a popular way of life that will bring ample income to hundreds of thousands of rural people. It will also contribute to significantly reducing the cost of importing petroleum. I wrote about this about a year ago but it did not receive the attention of the authorities or intellectuals.

By giving the farmers the right to hunt wild animals (parrots, monkeys, wild boar, peacocks) that harm the agriculture and allowing them to keep, transport and sell the meat could make a big difference to rural agriculture and make hunting a good source of income.

6). A land reform program can be launched to grant the permanent ownership to all those who have received land under Government Licensing Program and also to grant land to those interested in cultivating land and wish to engage in modern agriculture.

A policy could be adopted in which the land granted to the plantation companies under the privatization, but remain uncultivated, to be leased to the families of estate workers and also to the rural families living in the villages adjacent to the estates.

Cattle farming will not be economically viable unless it is pursued for producing both milk and meat. A policy that promotes the beef industry will certainly contribute towards making the country self-sufficient in milk as well.

8). The compensation we in Sri Lanka have to pay for not following a policy that relies on solar power instead of relying on thermal power in generating electricity is enormous. This error must be rectified.

It can be suggested that all temples, churches, shrines and kovils should be solar powered. Many institutions that fall into this category possess necessary funds for that and even those that do not have adequate funds could find the funds they need, easily.

Sri Lankans living abroad could be asked to convert their local homes into solar powered units, targeting 200,000 homes. It will be possible to introduce a system in which a high quality solar panel set could be obtained at a reasonable price payable in full or by installments.

If such a program could be popularized, it would serve as an important source for Sri Lanka to earn much needed dollars at the moment, as well as greatly reduce its dependence on thermal power for electricity.