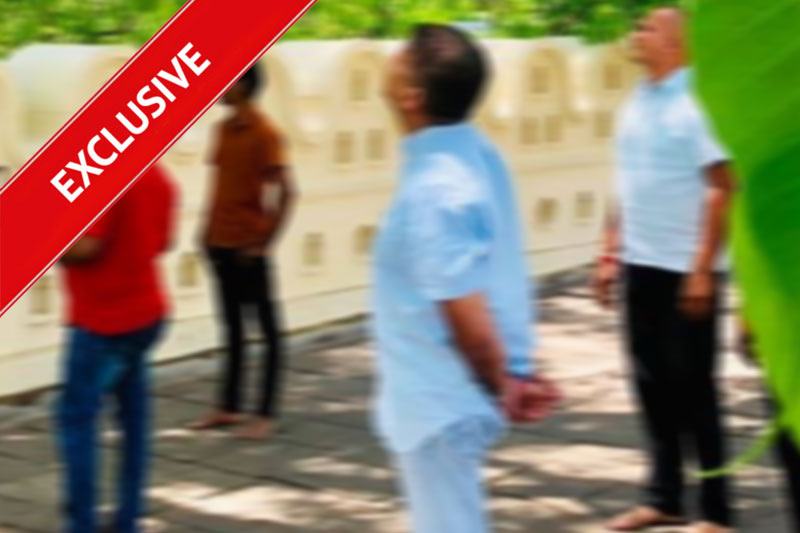 Security officers on duty at a place of worship had thwarted an attempt by a state minister to enter the premises at midnight despite it being closed for public as regulated.
The state minister, elected to parliament from the Kandy district, clad in a t-shirt and a pair of shorts and heavily intoxicated, had arrived with his family members and security personnel at midnight on Saturday (05) to conduct religious observances at the Ruwanweli Maha Saya. A clash has ensued following the security officers' refusal to allow them entry.

The state minister became irate when the security forces stated that they could not be allowed to enter the sacred area at this time. He has then proceeded to act in an unruly manner after berating the police officers stationed there for refusing him to enter the Stupa.

With the entrances closed for the public, the state minister had arrived at the Ruwanweli Maha Saya at around midnight that day with a group of about 12 people including his family members and security personnel.

After coming towards one entrance from Sangamitta Mawatha, the state minister had introduced himself to the police officers on duty there. He has stated that his party wanted to conduct religious observances at the Ruwanweli Maha Saya.

The police officers who were on duty at the time have rejected the minister's order stating that rules imposed by the temple prohibit anyone from entering the Ruwanwelia Maha Saya after 10 pm.

"Yako, I am a minister. If a minister isn't allowed to worship Ruwanweliseya, who is? Ask your head (referring to the OIC of the police) to come and meet me," the infuriated state minister had stated in a bellow of rage.
The police officers had been wearing black raincoats due to rain. The still irate state minister had shouted saying," Why are you dressed in black clothing? If you are given a bribe, you would have let us in. Police is filled with those who take bribes." The minister's security personnel and family members have tried to calm him down but to no avail.

The state minister had then proceeded to enter forcefully from another side despite the objections of the police officers. His security personnel as well the police officers had followed him but he was unable to get into the temple.

It is said that the state minister, who was still heavily intoxicated, had fallen to the ground once during this ordeal.

Meanwhile, the police officers at the security checkpoint have reported the incident to the Udamaluwa Police Station. Furthermore, the police have also informed the Chief Incumbent of the Ruwanweli Maha Saya Ven. Pallegama Hemaratana Nayake Thera regarding the incident.
Ven. Pallegama Hemaratana Nayake Thera said that on Sunday (06), the police officers stationed at the checkpoint had informed him about the incident. He made this observation with regard to the alleged misconduct of a state minister when contacted by phone.

Ven. Pallegama Hemaratana Nayake Thera said that he was unable to comment on the incident as he had not witnessed it. He further said that he had informed the police that it was their duty to investigate the incident and take appropriate legal action.