The Gampaha High Court today (26) postponed the decision on whether to grant bail to former CID Director Shani Abeysekara until December 07, following a vigorous objection
to bail made by the Attorney General’s Department.

The Attorney General’s Department, which in recent days has consented to bail being granted to former senior LTTE leader Pilliayan on charges of murdering an MP, consented to removing the travel ban on Basil Rajapaksa, consented to convicted murderers sitting in Parliament, consented to asserting diplomatic immunity for a fraud suspect in American courts, and issued guidelines for granting bail to people in remand for narcotics offences, has taken an especially strong stand against Abeysekara in particular.

Prosecutors insisted that Abeysekara would be a danger if released into society, and said he must remain in custody, even as his lawyers pleaded for mercy since Abeysekara, a decorated police officer with over 32 years of service, has recently tested positive for COVID-19. The former CID director, who was being held in isolation at the Mahara Prison hospital where he was being treated for severe diabetes and heart disease, on Tuesday (24) tested positive for COVID-19.

Against his will, Abeysekara was removed from isolation in the hospital, mixed with several other prisoners, and driven over 250 kilometres to an army facility in Gallella, Polonnaruwa, where he is now being held with restricted access to medical facilities.

Yesterday (25), the Human Rights Commission of Sri Lanka (HRCSL) ordered Commissioner General of Prisons Thushara Upuldeniya to direct his immediate attention to taking strong preventive measures to protect Abeysekara’s life. “If Abeysekara has contracted the virus, we recommend you ensure he receives treatment at the nearest hospital treating people infected by the virus immediately.” Upuldeniya was asked to respond by 30th November.

However, Abeysekara has been denied admittance to a hospital, despite early assurances to move him to the Infectious Disease Hospital (IDH), and he was taken to Polonnaruwa against his strong objections.

Earlier this month, before he contracted COVID-19, Abeysekara’s wife wrote to several senior officials including Chief Justice Jayantha Jayasuriya, Attorney General Dappula De Livera, IGP C.D. Wickremaratne and Prisons Commissioner General Upuldeniya warning of the grave risk of Abeysekara being assassinated in remand custody, and pleading with them to take steps to save his life.

No response was received to the letter, and no government official has taken responsibility for his life or wellbeing since he has been transferred to army custody.

Abeysekara’s investigations have led to the indictment of several army officers by De Livera for the abduction and killing of journalist Prageeth Eknaligoda in 2010. The incident took place in Giritale, a short distance from where Abeysekara is now being held. The indicted officers, including senior military intelligence officers, have been reinstated to the army by the new government, and are currently in active service. 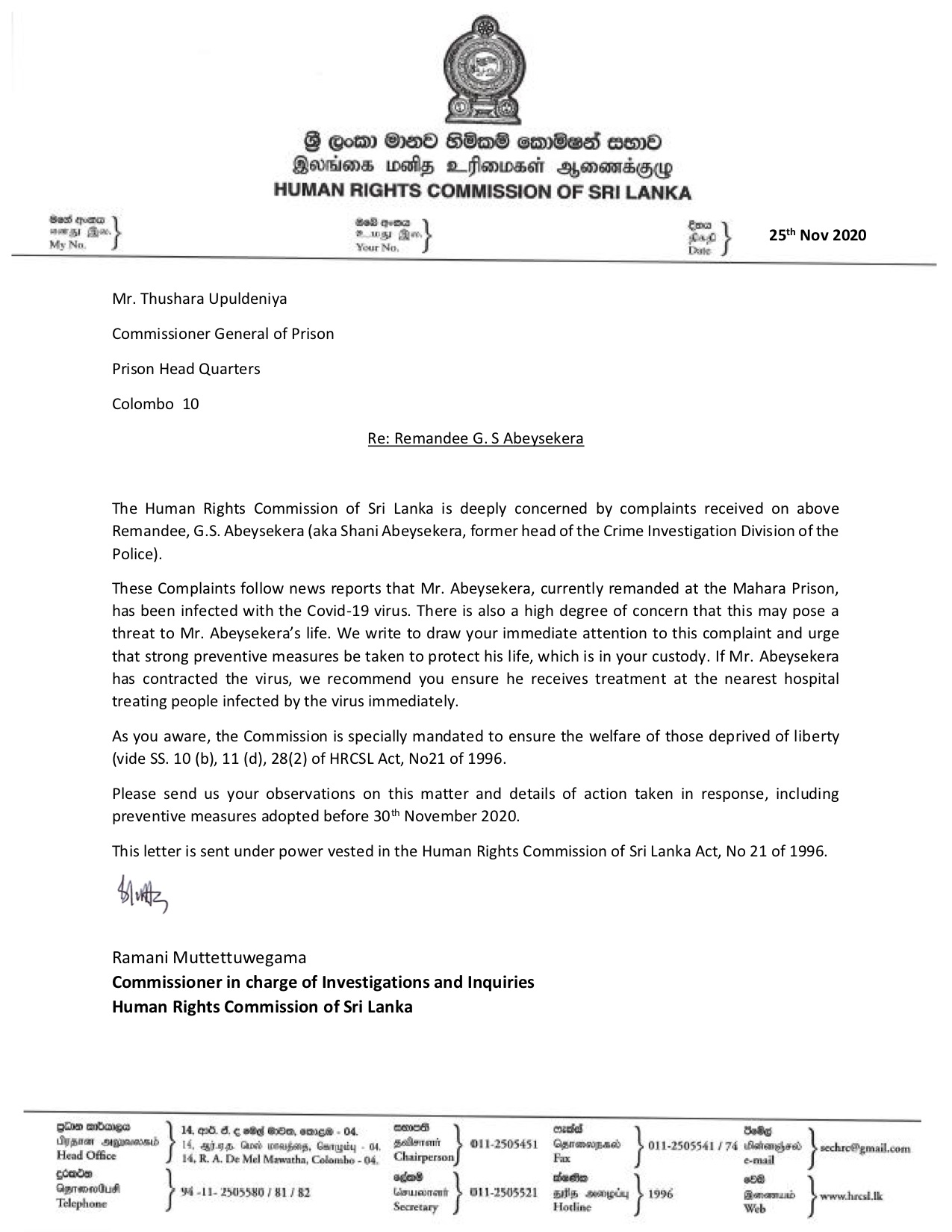