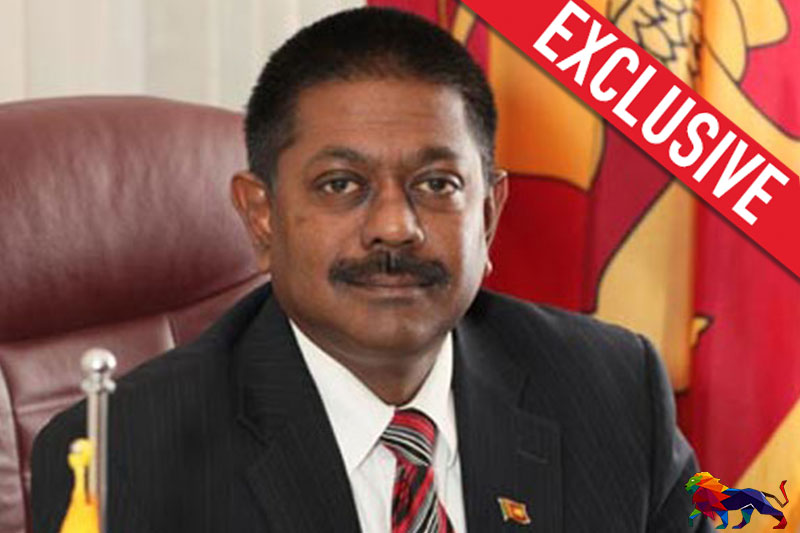 In a letter dated 2nd July 2020 to then Foreign Secretary Ravinath Ariyasinghe, President’s Secretary P.B. Jayasundera ordered the Foreign Ministry to inform the US Embassy in Colombo that the government of Sri Lanka is reasserting diplomatic immunity for Wickramasuriya. 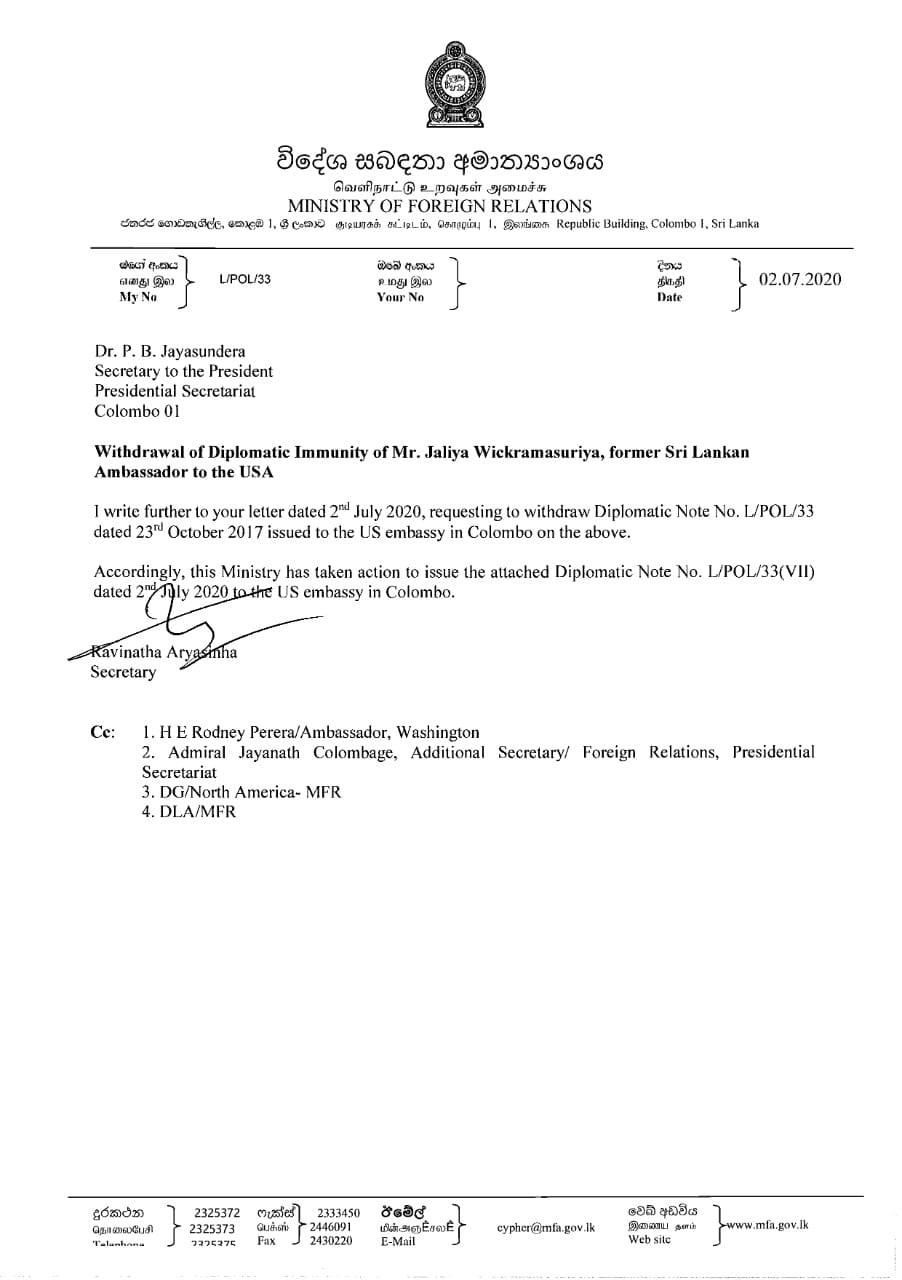 On the same day, the Foreign Ministry sent a communique to the US Embassy in Colombo seeking to reassert his diplomatic immunity, which had been revoked three years prior, in October 2017. 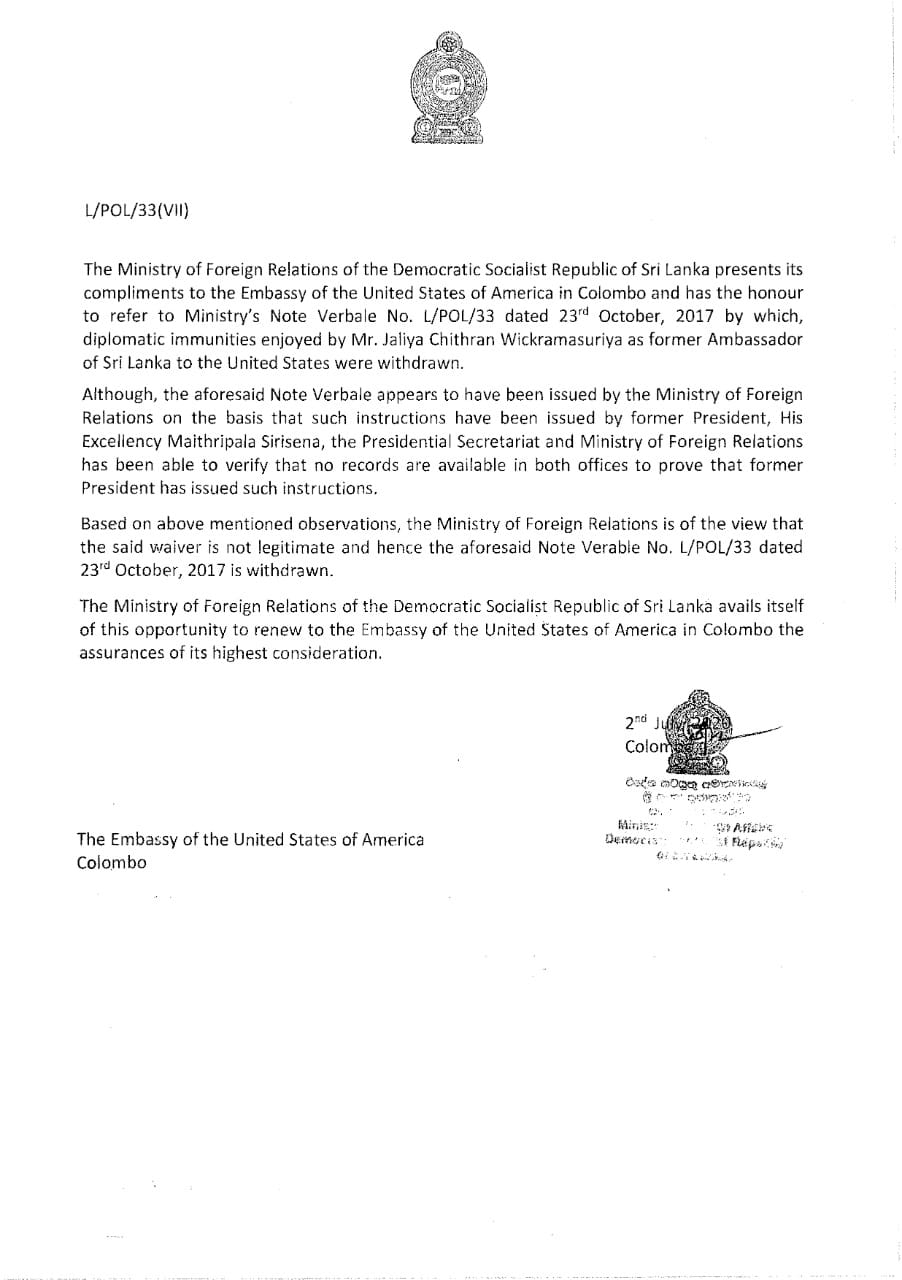 The American Justice Department in May 2018 indicted Wickramasuriya, who is a permanent resident of the United States, for wire fraud, money laundering and lying to immigration officers. While his crimes were being investigated in America, In October 2017 the US State Department requested that the Sri Lankan government waive Wickramasuriya’s diplomatic immunity and provide an assurance that they would not try to protect him for having committed crimes against the governments of Sri Lanka and the United States.

The request from the US to the foreign ministry read: “As the Ministry is aware, Mr. Wickramasuriya, former Ambassador to the United States, is under investigation for the misappropriation, theft, and embezzlement of public funds by a public official and the related laundering of those funds. The embassy has been informed that U.S. law enforcement authorities maintain that during the 2013 purchase of the Sri Lankan Embassy in Washington D.C., Mr. Wickramasuriya falsely inflated the sales price of the embassy by approximately $332,000. They further stipulate that he then laundered those funds via shell companies, all in violation of the U.S. money laundering and wire fraud laws.”

The Foreign Ministry responded with a diplomatic note back to the US Embassy in Colombo stating that Sri Lanka “accordingly waives any immunity Mr. Wickremasuriya enjoys with regard to such investigations, including but not limited to testimonial immunity and immunity from the criminal, administrative and civil jurisdiction of the United States.”

Wickremasuriya filed a writ application in the Court of Appeal against the decision to revoke his diplomatic immunity. During the case, the Attorney General’s Department presented an affidavit from Foreign Secretary Prasad Kariyawasam.

The court dismissed the application in March 2018 on the grounds that the decision to revoke Wickramasuriya’s immunity had been taken by President Maithripala Sirisena, and that the court had no jurisdiction to overrule an official act of the President.

However, after President Gotabaya Rajapaksa took office, records of the revocation of diplomatic immunity have apparently gone missing from the Foreign Ministry.

When Wickremasuriya’s writ appeal was taken up in the Supreme Court on 13th July 2020, Additional Solicitor General Farzana Jameel was instructed by Attorney General Dappula De Livera to reverse the government position and to side with Wickramasuriya.

Jameel has said that the original evidence given by Kariyawasam was false and that since there was no proof that President Sirisena ordered the revoking of immunity, the court should side with Wickramasuriya.

The shocked bench, comprising justices Priyantha Jayawardena, Vijith Malalgoda and Sithambarampillai Thurairaja had told Jameel that such a serious allegation could not be made without proof. The judges have stated that a foreign ministry official or other witness would have to provide an affidavit stating that Kariyawasam had lied in his earlier evidence, which had been led by Senior Additional Solicitor General Yasantha Kodagoda, who is now also a judge on the Supreme Court.

The case was postponed for 29th July to allow the state to produce an affidavit against Kariyawasam, but on that date, it was again postponed to 2nd November as no foreign ministry official had come forward to give evidence. The case has now been indefinitely postponed due to the pandemic.

Meanwhile, the US Embassy in Colombo has informed the Foreign Ministry on 19th August that it is disregarding the request to reinstate Wickramasuriya’s immunity. The reply from America reads in part: “The United States notes that under Article 32 of the Vienna Convention on Diplomatic Relations, waivers must be expressed, but international law does not dictate the internal domestic process for waiver or provide that a waiver can only be made by a head of State or government. The October 23, 2017 waiver was expressed and appropriately communicated by the Ministry of Foreign Affairs via diplomatic note on behalf of the Democratic Socialist Republic of Sri Lanka. Since then, the U.S. government relied on the Democratic Socialist Republic of Sri Lanka’s waiver and has taken steps consistent with the waiver.” 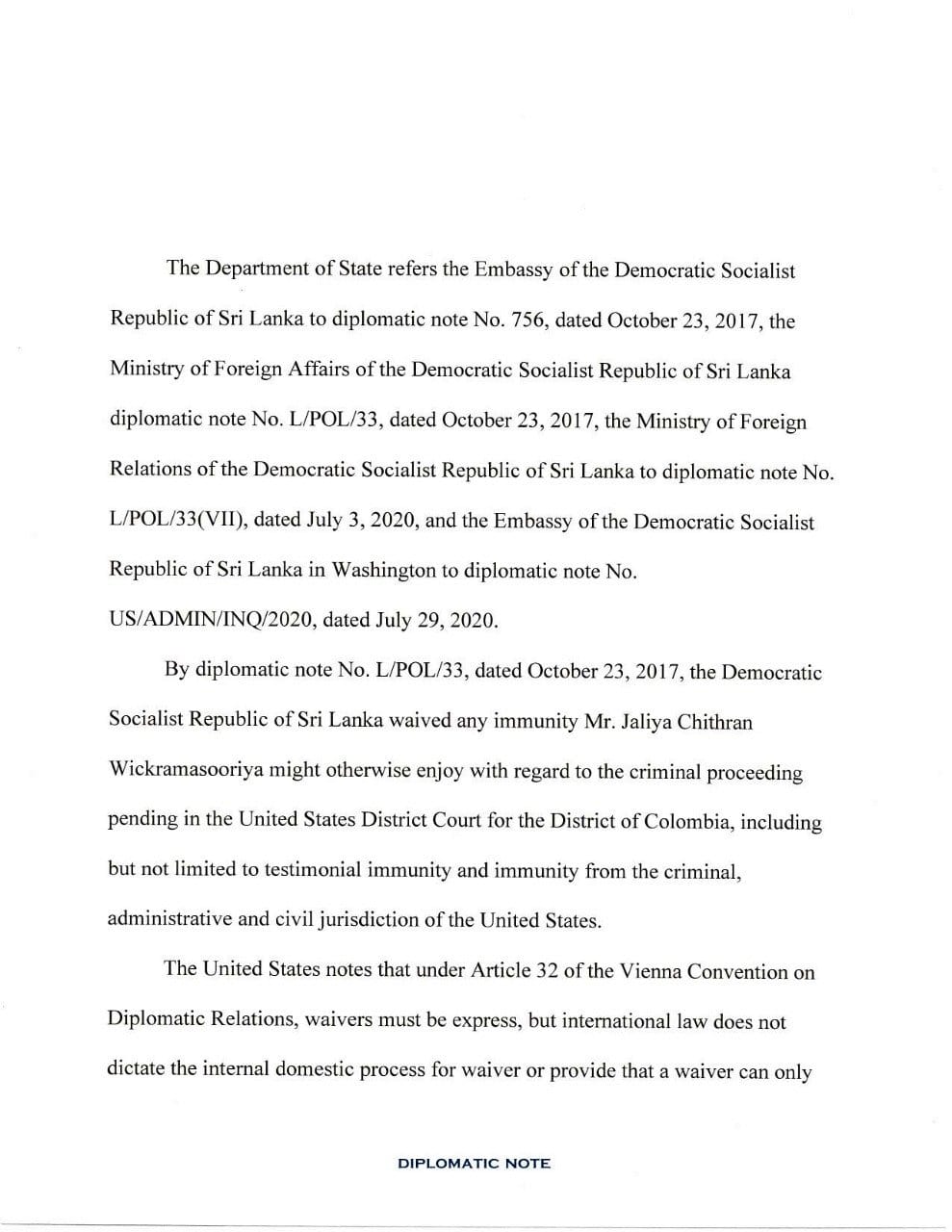 “It is a well-established principle of international law that a sending state cannot revoke a waiver of immunity once it has been given. Therefore, to the extent that any residual diplomatic immunity otherwise might have applied with respect to Mr. Wickramasuriya in the pending proceeding, the United States considers the Democratic Socialist Republic of Sri Lanka to have validly waived Mr. Wickramasuriya’s immunity.” 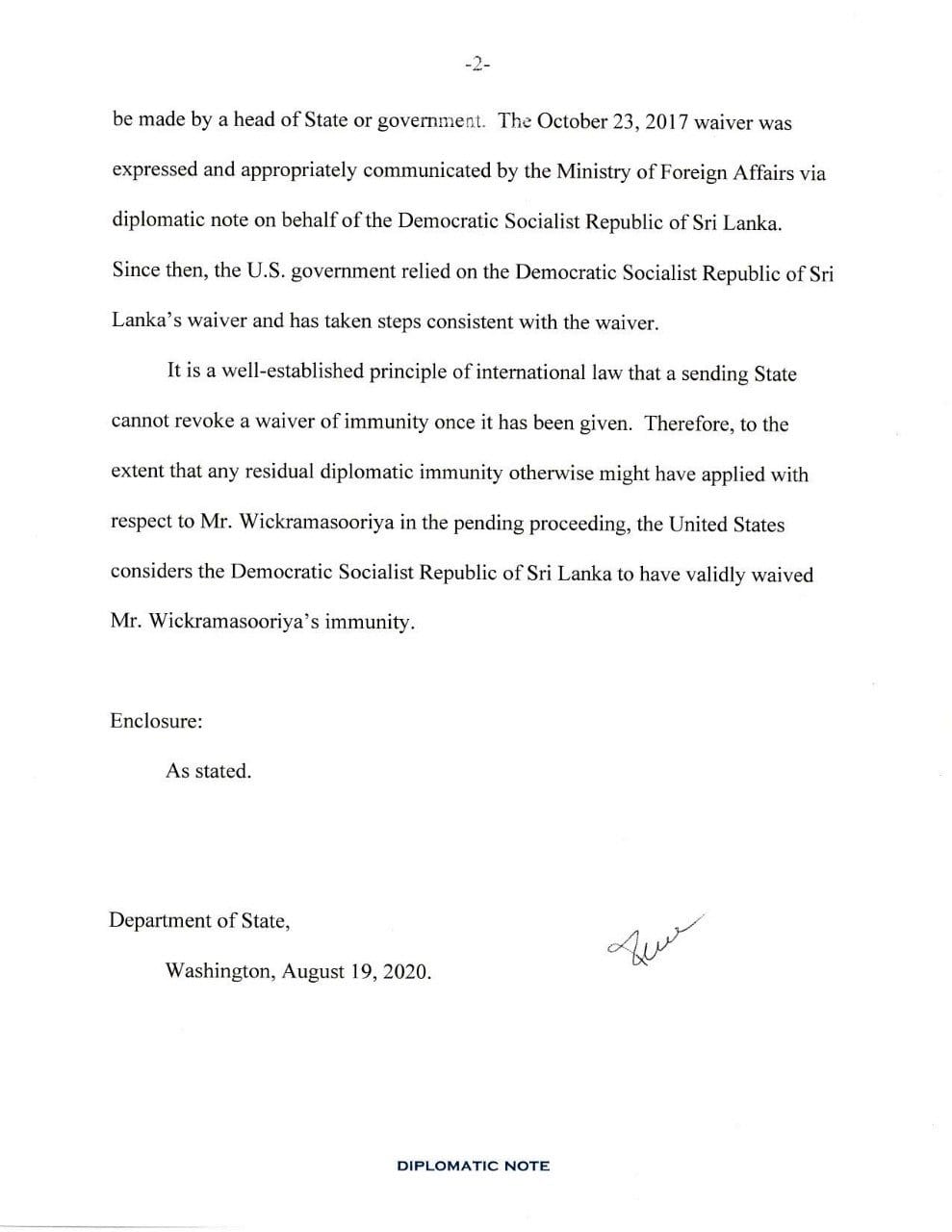 The Sri Lankan government responded forcefully in a response dated 8th September 2020 insisting that “diplomatic immunity of Mr. Wickramasuriya has never been waived” and warning America that the decision to protect the president’s cousin was one “taken at the highest government level” and sharply stating that the 2017 waiver of immunity must not be “used in any manner contrary to the position of the Government of Sri Lanka.”
In a letter dated 9th November 2020, the government reiterated their position and noted that "the Government of Sri Lanka has not, at any time, properly waived the diplomatic immunity of Mr. Jaliya Chithran Wickramasuriya as the former Ambassador to the United States." 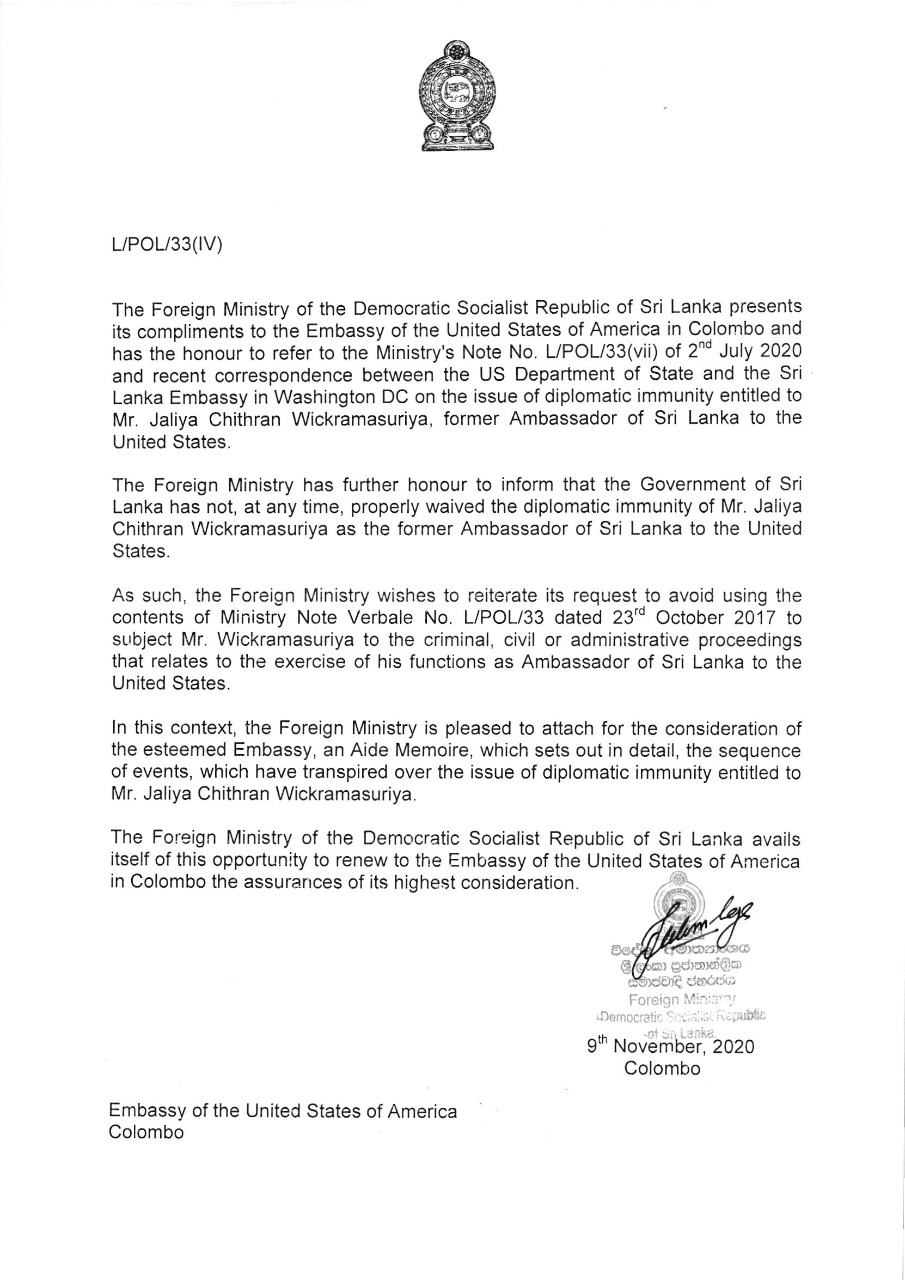 The American government seems to have ignored messages and has since stopped engaging with the Sri Lankan government on the subject.