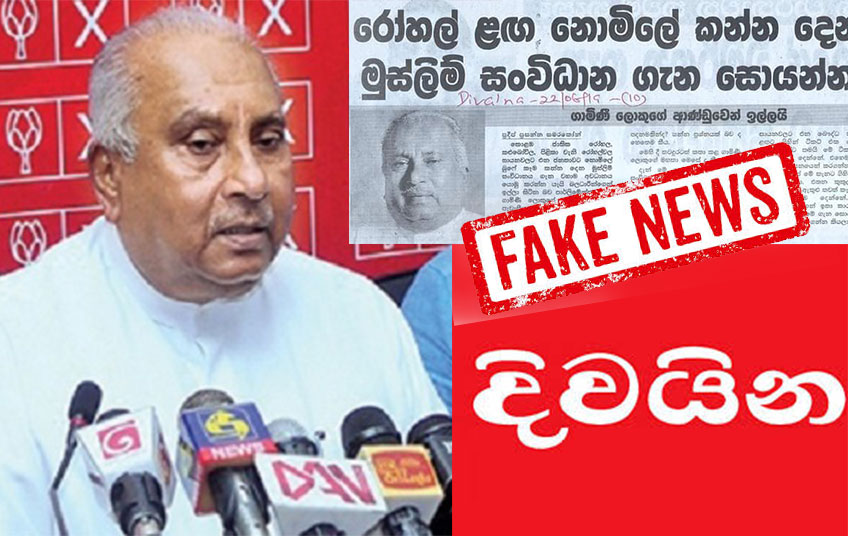 Following the severe backlash received for an alleged comment made by MP Gamini Lokuge over free meals being provided for hospital patients by a Muslim charitable organisation, the parliamentarian has now denied making the comments. Instead, Lokuge is now slamming the Divaina newspaper claiming the news was fabricated.

“I was deeply saddened when I heard about the news report,” he said adding that the son of former Governor Alavi Moulana and current Western Province Governor A.J.M Muzammil both contacted him to inquire if he had made these comments which may cause racial disharmony.

“I never made such a comment, this is a good charitable act,” Lokuge said. According to him, if there is an issue with regards to the organization and its activities, it is up to the Ministry of Health officials to look into it and not up to politicians such as him. “I apologise if this report hurt the sentiments of those carrying out this charitable project,” the MP added.

The recent racially inciting report on Divaina had claimed Lokuge had raised concerns about the Janaposha Foundation which provides hundreds of free meals daily to patients attending clinic sessions at three major hospitals.

The report said Lokuge had suggested authorities should look into the Muslim organisation giving free meals to patients, especially targeting Buddhist women. It attempted to fear monger by claiming the MP said he has suspicions if the meals are making Buddhist women infertile.

Divaina newspaper, which has become infamous overtime for their racially charged news reporting, has recently been involved in yet another false sterilization scare which has landed a Muslim doctor in prison. However, the report filed by Divaina seems to be unravelling fast and the allegations appear to be baseless.

The organization Divaina was trying to attack this time around is the Janaposha Foundation, a charity which provides hundreds of free meals in the vicinity of several major hospitals in Colombo daily. They have been in operation for the past five years. Providing breakfast and lunch to those attending clinic sessions the organization usually provides meals for around 350 people daily at premises close to the National Hospital while providing 300 meals for patients visiting the Kalubowila Hospital. Another 350 free meals are given out at the Maharagama Cancer Hospital.

Parliamentarian Gamini Lokuge's comments on the false news report by 'Divaina' is found below.