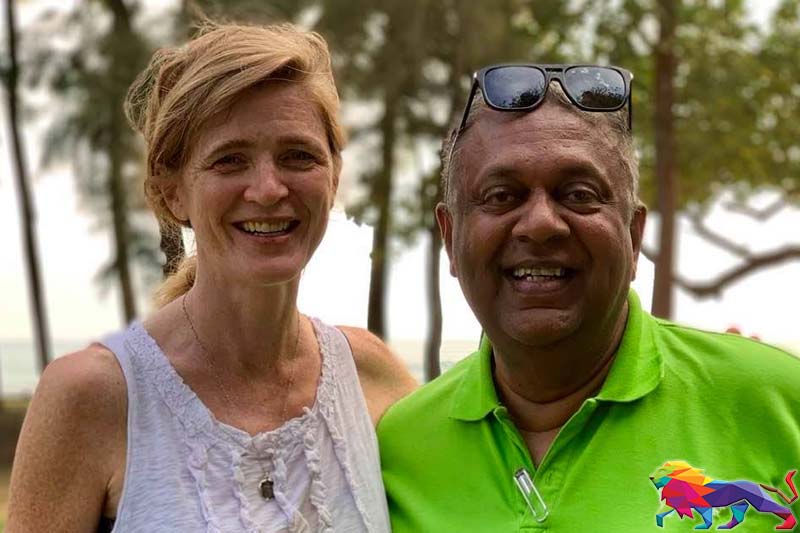 Administrator of the United States Agency for International Development (USAID) Samantha Power who concluded a two day visit to the island nation yesterday had met the late Mangala Samaraweera's sister to personally extend her condolences on the demise of the former charismatic politician.

A former US ambassador to the United Nations during President Obama's tenure before her current role as administrator of USAID, Power was considered to be a close friend of the late politician.

The then ambassador Samantha Power was the keynote speaker at the celebration of Mangala Samaraweera’s 30 years in politics that was held at the Bandaranaike Memorial International Conference Hall on February 28, 2019.

One of a kind 'Conviction Politician'

Power has described the late Mangala Samaraweera as one of a kind ‘conviction politician’ full of brilliance, creativity and wit, who constantly put the country first.

Taking to Twitter she says, “I’ve been overwhelmed in Sri Lanka by the omnipresent spirit of the late Mangala Samaraweera, a dear friend. A “conviction politician” full of brilliance, creativity & wit, who constantly put country first, Mangala was one of a kind.

In my meetings with president Ranil Wickremesinghe, opposition leader Sajith Premadasa, civil society, the private sector & USAID’s remarkable Sri Lankan staff, Mangala’s ideas & impacts were invoked & debated so much that I found myself expecting him to come barreling around the corner.

Sri Lankans are enduring profound challenges right now & Mangala’s wisdom, his connection to young people & his pragmatic idealism are sorely missed. But I hope even as we continue to grieve his absence, we can all continue to take inspiration from his memory. I know I will.” She emphasised the United States’ commitment to supporting the Sri Lankan people during this difficult time and partnering with them to build long term economic stability and prosperity.