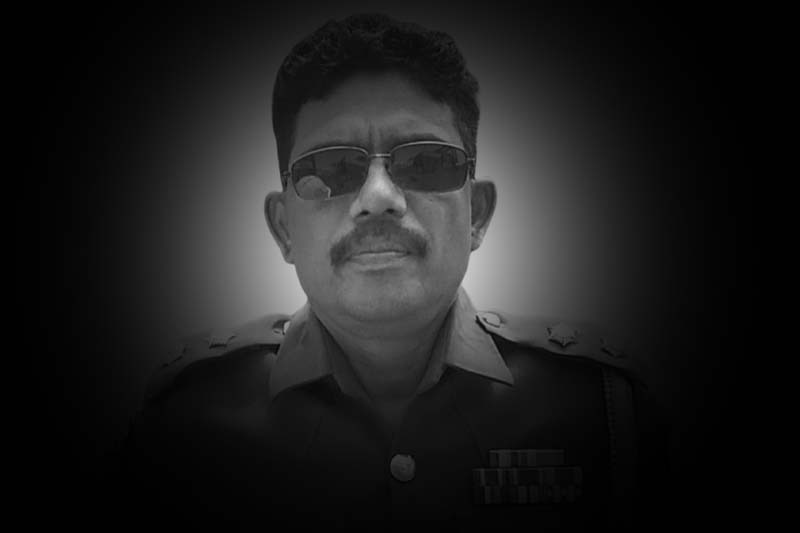 It is with profound sadness that I record the passing away of my long standing client and friend Inspector of Police Wadood Mohamed Ajmeer who breathed his last this morning (13.01.2023) at his native Kalmunai.

Popularly known as Ajmeer naana among Tamil political prisoners with whom he spent over a decade in the inhospitable environs of the Magazine Prison, Borella, Ajmeer was arrested in or about 2010 under the Prevention of Terrorism Act (PTA) allegedly for aiding and abetting the LTTE, while he was serving as OIC of Maligakanda Police Station.

Several cases were framed against him with three indictments filed in the High Court of Gampaha and two in Colombo High Court indicating the determination of the AG's Department to fix him on concocted multiple charges. Confronted very soon with their folly, two indictments had to be hurriedly withdrawn. In an emblematic case tried by the Special (PTA) High Court in Colombo, after a grueling and hard fought Voir Dire inquiry, HC Judge Piyasena Ranasinghe by his order rejected the confession to be admitted in evidence. While I was returning from an outstation court, the indefatigable Junior Counsel in the case Mr. Suranga Bandara informed me (may be in June 2016) over the phone about the verdict, I was stunned and overjoyed with the unbelievable " breaking news". Soon thereafter, other cases against Ajmeer were withdrawn by the AG as there was no evidence other than the hollow confession extracted by the Police through devious means, ironically in this instance the victim being a Police officer himself. This victory against all odds gave a fresh impetus not only to me but also to other PTA detainees awaiting trial. The much feared Special Court seemed less daunting as this was the first of such verdicts that were to follow.

Ajmeer was a born fighter and an amiable client any lawyer would like to have. At the outset when I told him I am not in favor to plead guilty for a lesser sentence, he supported me to the hilt to challenge the case. In this respect, he had his ever faithful and affectionate brother Rizvi who spared no effort in supporting his elder brother's cause. Which reminds me the Tamil axiom, "தம்பி உடையான் படைக்கஞ்சான்". (Having a younger brother for support, you fear no enemies).

Ajmeer got back his Police job after a few months of being pushed from pillar to post. He donned his uniform again with pride and aplomb being appointed as OIC Moneragala. However, his woes had not ended. The authorities in the Police Department did not take kindly to Ajmeer's triumph over evil forces. They stripped him of his post again by charging him on disciplinary  grounds. Once again Ajmeer came out with flying colors with almost all the charges dismissed by the Inquiring Officer. He was on the verge of regaining his position with backwages and  due promotions when fate intervened with a fateful massive heart attack in the early hours of the day at about 4.00 am.

While we salute the undaunted and unrelenting hero in Ajmeer, we also are mindful of the hardships and tragedies that befell him owing to the witch hunt and insidious attacks on Ajmeer using PTA as a weapon to destroy the man. Although the decade long incarceration could not destroy his indomitable spirit, it certainly succeeded in wreaking havoc to his personal life, creating a split in his marital life and breaking up his family into smithereens. What greater damage could befall on a man? That PTA has caused similar unremitting and untold damage to almost all prisoners charged under that law and kept in custody for prolonged periods is plainly and vividly exemplified by the torments undergone by  Wadood Mohamed Ajmeer. Good bye gallant warrior. May the turf rest lightly on him.

Penned by his lawyer K.S.Ratnavale