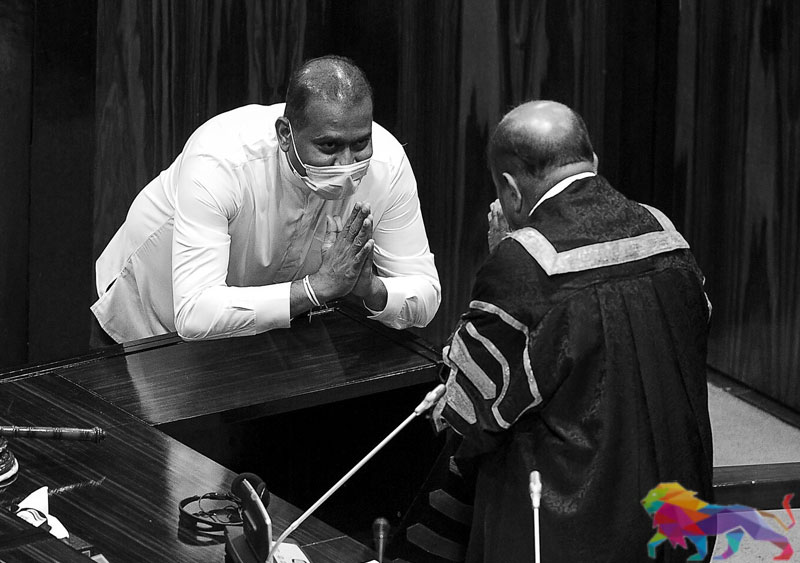 The Parliament can be considered as the first respondent responsible for the collapse of the political and social system of Sri Lanka. 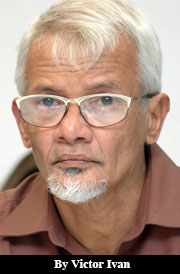 I would like to begin this article with a prediction made on Sri Lanka, by Professor Johan Galtung who is considered to be a distinguished scholar of international repute, during a discussion I had with him.

Galtung is a Norwegian professor and the principal founder of the discipline of peace and conflict studies. He is also a renowned sociologist, mathematician, historian, economist and a political scientist. Now he is in his 90s. I have attended two of his workshops  held in Austria and published the Sinhala translation of  his book "An Introduction to Conflict Resolution", titled  “Gatum Nirakaranaya Pilibanda Sidhhdi Adhyanayak”.

Galtung may have visited Sri Lanka about twenty times, from time to time. The following is a remark he made about Sri Lanka in the course of the conversation I had with him when he visited Sri Lanka during the tsunami disaster. He told me that he found a copy of  the English translation of my  book on judiciary of Sri Lanka titled “Nonimi Aragalaya”, the “Unfinished Struggle” which I have written and published, and was able to read about half of it by the time I met him. Having said that, he made the following comment: “In any State, the Supreme Court is invariably ranked in the apex of the institutional hierarchy, and all the other power centers and institutions of the State are ranked at a lower level compared  to the Supreme Court; when reading your book, the impression created in me  was that apparently, the Supreme Court of Sri Lanka is caught up in a rapid flood, and if it is so, all the other institutions and power centers of the country should be caught up in a greater flood, and such a situation can not be considered as a normal situation, but an extremely abnormal condition,” he said.

Evidently, Professor Galtung has been able to perceive the “Whole” through one aspect of it. Ostensibly this observation (of Galtung) and several other opinions and ideas have influenced the studies and observations he has made on the State of Sri Lanka and its society.

According to my observations, the end of the internal Civil War was the best opportunity that Sri Lanka had for adopting structural reforms. By the end of the war, there was a major breakdown in the State and the social system. The government was able to suppress two armed insurrections launched by Sinhalese and Tamil rebels. Yet, the damage caused by them to the state and the society was immense. This situation has also contributed to the failure of the State and its rapid deterioration. Since 1977, looting of public property has become a regular feature of the state administration which too, has been a major factor in the deterioration of the State. Adopting structural reforms had become an indispensable condition to rebuild the nation which had been disintegrated and torn apart at the end of the internal Civil War and to recreate the State which was lying in a state of acute degeneration caused by rampant corruption and to give impetus for a beneficial forward move of the country. But, the rulers who were obsessed and blinded by the victory of the war failed to see this reality. By then, the Parliament too was in a state of maximum decline. Therefore, the Parliament was not able to understand the reality.

Even before 1977, we did not have a Parliament with a sound democratic vision; yet we had a parliament which was efficient and free of corruption. Though the heads of State lacked a strong forward vision they did not plunder the public property under their custody.

It was with the establishment of the presidential system of governance that the parliament was turned upside down. With that, the Parliament lost its supremacy and became a mere rubber stamp of the President. Consequently, there occurred a major diminution in the recognition of parliamentarians. So, President Jayewardene allowed the MPs to transact business with the government violating the democratic principles and the law, to keep them happy in case they were frustrated. Consequently, some of them became landowners by acquiring land belonging to the government while some others became government contractors and licensed timber, rubble and sand dealers.

All the other presidents who succeeded JR Jayewardene also continued this corrupt system adding new elements to it. During the tenure of President Chandrika, about 1,500 bar licenses were distributed through government MPs. Under the circumstances, a substantial number of MPs became bartenders and tavern owners either directly or indirectly. This corrupt system deprived Parliament of its recognition. It also caused to deprive the legitimacy of the MPs. Though this system was contrary not only to democratic norms and principles but also to the law of the land, almost all Presidents, protected the MPS engaged in business transactions with the government by using their power of immunity. The best example of this situation is the appointment of Albert Silva as a Chit MP for Kamburupitiya electorate by President JR Jayewardene when the former was disqualified to sit in Parliament, by a panel of judges, including Chief Justice Neville Samarakoon, for possessing kerosene license issued by the government when he was elected to the Parliament from the UNP in 1977. This shows that it is not only the heads of State who were relatively ignorant, had their education in underprivileged schools and hailed   from less privileged circumstances, but also those who have studied in super grade schools such as Royal and St. Thomas' college, and were hailing from elite families that had played the role of plunderers in the state administration.
Sarath Nanda Silva who turned the judiciary into a stinking place had his education in Trinity College, Kandy. DS Senanayake, Sir John Kotalawala and SWRD Bandaranaike were educated at St. Thomas' College. Sirima Bandaranaike and Chandrika Bandaranaike were educated at St. Bridget's Convent and JR Jayewardene and Ranil Wickramasinghe at Royal College. None of these super grade colleges have been able to produce leaders who are capable of rescuing Sri Lanka, except mediocre leaders.

The Role of the Parliament

The changes occurred in the moral behavior of parliamentarians resulted in changing the nature and the quality of the parliament as well as the political system. The struggle for political power became a competition for securing the right to plunder public property in addition to gaining power to rule the country.
The benefits of plundering public property also flowed to the hands of the members of respective parties in various ways. Adopting a policy that allowed all those interested in plunder to do so became a necessary prerequisite in order to sustain and pursue this corrupt practice without hindrance. Moreover, a system was in operation in which ransoms were paid to those who demanded them, at the expense of the state. This corrupt system not only diminished the revenues of the treasury and plunged the country to bankruptcy, but also corrupted the entire institutional system, including the social system.

The damage done to Parliament is also immense - (a) Legislation, (b) Fiscal policy, (c) Supervision of the other two power centers, that is the Executive and the Judiciary, (d) maintain peace, unity and stability in the country can be considered as the four main responsibilities of Parliament. But the predatory nature of Sri Lankan parliamentarians has completely blunted the sensitivity that the Parliament should possess in regard to these four elements.

In India, criminal cases against MPs, if any, must be heard and completed within a year. If there are appeals, they must be heard within three months. In the event a person with a criminal record is given nominations, the reason for that should be explained by a public notice. All such conditions relating to the Members of Parliament can be regarded as provisions stipulated by the Judiciary and not by the Parliament.

But the policies of the judiciary on parliamentarians in Sri Lanka are extremely lenient. A significant number of MPs have criminal cases; some of them are more than 15 years old. It was the judiciary that has been used as the basis when the salaries of the Members of Parliament were revised, rather increased.
The ruling party always tends to raise the salaries of the judges generously when it wants to increase their salaries. After a while, they increase their salaries claiming that there is a disparity in their salaries compared to that of the Judges. Apart from that, and as usual, they claim arrears as well. In keeping with the new salary increments offered to the judiciary, the monthly salary of the MPs too, is scheduled to be increased to Rs. 450,000. Along with that they are supposed to receive a large sum of money by way of   arrears as well.

Country or the Parliament?

The ugliest feature of the Sri Lankan Parliament is that none of the MPs in Sri Lanka voice their opinion against this illegal, anti-democratic and heinous system that reigns within the Sri Lankan Parliament. The most unfortunate thing is the tendency of both the traditional and alternate leaders in Parliament to adopt measures that would perpetuate this illegal, anti-democratic, corrupt and shameful system in formulating the so called plans to rescue Sri Lanka.Yet, it is strange to note that no one speaks for a change in this corrupt system. If an alternate leader, whoever it may be is prepared to rescue the parliament first, before rescuing the country, the people of this country must entrust the responsibility of saving the country to him.