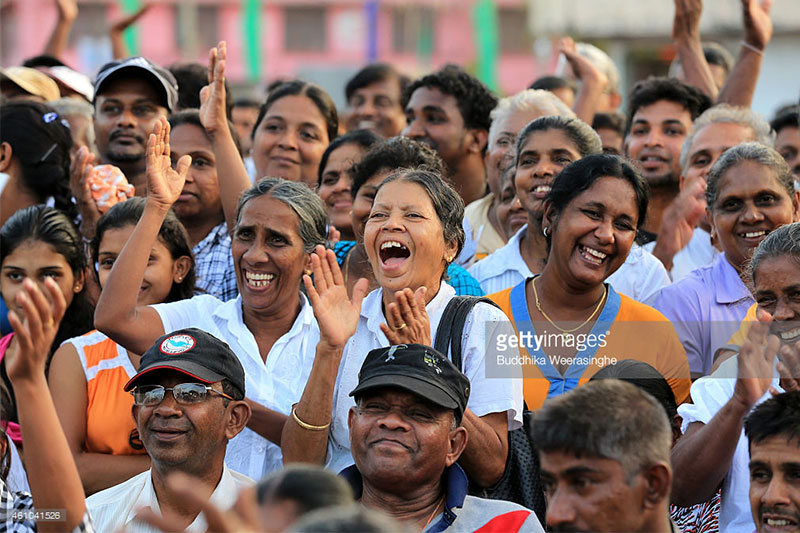 Although decisive presidential elections are only nine months away political mobilization is not taking place at the mass level at the present time.

This accounts for the fact that the main sideshow for the past several weeks is about the detection of large consignments of narcotics and the arrest of drug dealers, most of whom appear to be the agents of others who have still to be apprehended. There is the added distraction of a parliamentarian going public and alleging that several of his fellow parliamentarians are themselves taking drugs. Instead of mass mobilization for political victory, the political meetings being organised are on a small scale and meant for party cadres who will take the propaganda messages to the people when the time comes.

In the absence of mass mobilization events the political events that have been highlighted have been the felicitations of politicians who have notched up decades of service to the public. The felicitation events for Finance Minister Mangala Samaraweera and Tourism Minister John Amaratunge were attended by virtually all party leaders and received considerable media coverage. Former US ambassador to the UN, Samantha Power, who was the keynote speaker at Minister Samaraweera’s felicitation was widely quoted in the media. Giving a glowing testimonial to the minister she said that all over the world, democracy seems to be under attack, highlighting in particular the episode of Sri Lanka’s constitutional crisis.

Former ambassador Power also recognised the key contributions made by civil society, the judiciary, journalists, and political leaders in overcoming the challenge to Sri Lanka’s democracy. She said that although Sri Lanka’s institutions were under severe stress, they were not breaking. This is comparable to the situation in the United States, where President Donald Trump has been acting in a populist manner which is out of sync with the traditional ideals of that country. But he has been restrained to a significant degree by strong institutions that are not buckling under pressure. At a time when the Constitutional Council, which is meant to strengthen public institutions, is under attack by the opposition, this is a salutary reminder that in Sri Lanka too, the task is to strengthen institutions, such as the public administrative service, the judiciary and the various independent watchdog commissions, such as the Human Rights Commission, Police Commission and Bribery and Corruption Commission.

However, an even more significant speech was delivered at the felicitation for Minister Amaratunge by Cardinal Malcolm Ranjith of the Catholic Church. He made pronouncement on national issues that require a sure grasp of the complex political realities in the country. Addressing the gathering, which included the top political leadership of the country that was seated in the front row, including President Maithripala Sirisena, Prime Minister Ranil Wickremesinghe and Opposition Leader Mahinda Rajapaksa, he said the country needed a transformation of its political life. He called for each ethnic and religious community to be given the space, freedom and rights to grow and flourish. He pointed out that the political basis for decision making in a multi ethnic and multi religious society was multilateralism and not majoritarianism.

Last week the National Peace Council launched a report that presented the findings of a Religious Freedom Index (RFI) conducted across the 25 districts in the country. The Religious Freedom Index is a survey study based on public expert opinion on the status of religious freedom in their respective areas. This study, undertaken by Dr Pradeep Peiris of Colombo University was to enable policymakers, law enforcement authorities, religious leaders and the general public to become more aware of the social, political and cultural context within which religious freedom exists. An important finding was that religious freedom and inter-religious tolerance by and large already exists within the community. What is needed is to protect it from ill motivated intrusions from outside the community.

Sri Lanka is fortunate to have the basic ingredient for social cohesion, which is the willingness of people to readily engage with those of other communities and to take them as opportunities to be hospitable to those from outside who have come into their midst. One of the most readily observable features of any community level inter-religious or inter-ethnic interaction is the goodwill that resonates throughout the activity and is readily visible. When asked about religious freedom in the areas in which they live, the great majority of respondents in the survey claimed that they can practice their religion freely. For example 83.5% stated there is no obstacle at all to practice their religion in the area they live. However, these same respondents also believe that the situation in the country as a whole is more precarious for religious freedom.

The religious freedom survey showed that the communities harbor various insecurities about the future. Even as they feel that they enjoy freedom in the present, they are very concerned about the freedom to practice their culture and religion, and their demographic strength in the future. They also felt that the sense of security that they experience in enhanced where there is a good understanding between the religious leaders in their area. The main reasons for this would be the fact that the religious leaders are better able to intervene as community leaders in any internal breakdown of social harmony. What they could not control however was the interventions that came from outside and more powerful than they. What is needed therefore is a national level leadership that permits each ethnic and religious community to have the freedom and rights to live as empowered citizens and to protect their own spaces.

On the one hand there is the vision of a polity that is essentially Sinhala Buddhist because a big majority of 70 percent of the people belong to this community. Catering to the sense of history of this majority and to the fears and insecurities that accompany it, was a winning formula put forward by former president Mahinda Rajapaksa and members of his political alliance during the decade of his presidency. On the other hand, there is the countervailing vision of a multi-ethnic and multi-religious polity in which each community has its own sense of history and fears and insecurities. The present government has been seeking to stand for this vision.

The real political focus at the present time is in identifying the political direction for the future with an emphasis on building of political alliances. Even as the country closes its first decade after the end of the war, the issue that is likely to be uppermost in the minds of the people will be to whom the country’s future be entrusted to. The basic requirement that will be sought in the selection of the candidates will be to identify who can be trusted to stand by a set of values and obtain the vote of the majority of the electorate. There is a short list of candidates on both sides. Each of them has their strengths and weaknesses. The final decision will be made after a careful calculation as to who will be able to present the vision that summons up the support of the majority of the voters.