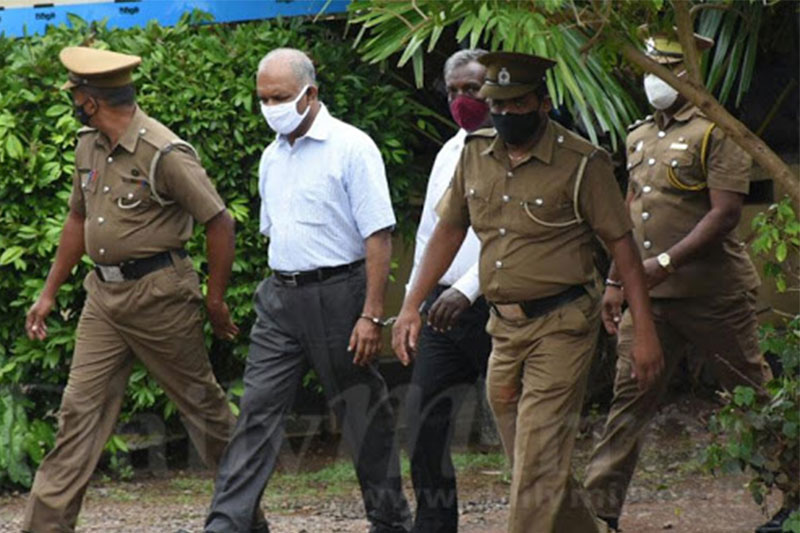 Former CID SI Rannulu Sugath Mohan Mendis, who was arrested in August as part of the witch hunt against Shani Abeysekara, is still suffering from severe COVID-19

symptoms in the Mahara remand prison, for the fourth day, without any access to medical treatment. Mendis' family have been unable to get any information from officials about his condition.

Both Mendis and the other CID officer locked up in Mahara, SI  Nawarathna Prematillake, have received death threats over their role in the investigation into the abduction and murder of journalist Prageeth Ekanligoda by a team of Military Intelligence officers in 2010, as well as their part in bringing to justice the police contract killer squad that killed businessman Mohomed Shiyam in 2013.
In their search to fabricate evidence against former CID Director Shani Abeysekara, persons claiming to be CID officers had gone as far as to threaten Prematillake's family, including one of his children who suffers from a disability, warning that their 62 year old father would pay with his life unless he helps the government get revenge on Abeysekara.
Colombo Crime Division (CCD) officers were livid with Prematillake when he surrendered himself directly to the Gampaha Magistrates Court rather than expose himself to further threats and intimidation by CCD officers, like what happened to SI Mendis, who told the Gampaha Magistrate that the CCD threatened him with arrest unless he agreed to lie about Abeysekara.
Abeysekara, Mendis and Prematillake are key state witnesses in the criminal trials of 9 army officers for the Eknaligoda murder, 14 navy officers for the abduction, extortion and murder of 11 youth, and outstanding investigations into DIG Vaas Gunawardena. Their death would ensure that all the accused walk free.
Officers of the Attorney General's Department led by Deputy Solicitor General Dileepa Peeris, who is prosecuting the Eknaligoda case, have sought to tarnish their credibility and brand them as criminals, a move that would justify the AG discharging the accused military officers and withdrawing all criminal charges against them, sending the CID officers to prison in their place.
The State Intelligence Service (SIS) last month reported that an underworld figure known as "Gannemulla Sunil" was contracted to kill Abeysekara, Prematillake and Mendis for a price of Rs. 50 million. The report was suppressed by Defence Secretary Kamal Gunaratne, who refused to allow the SIS to share the intelligence with the IGP or prison authorities before the Mahara prison riot, it is reported.
Related News:
Witch hunt against Shani - Another CID officer fallen ill and being denied medical treatment