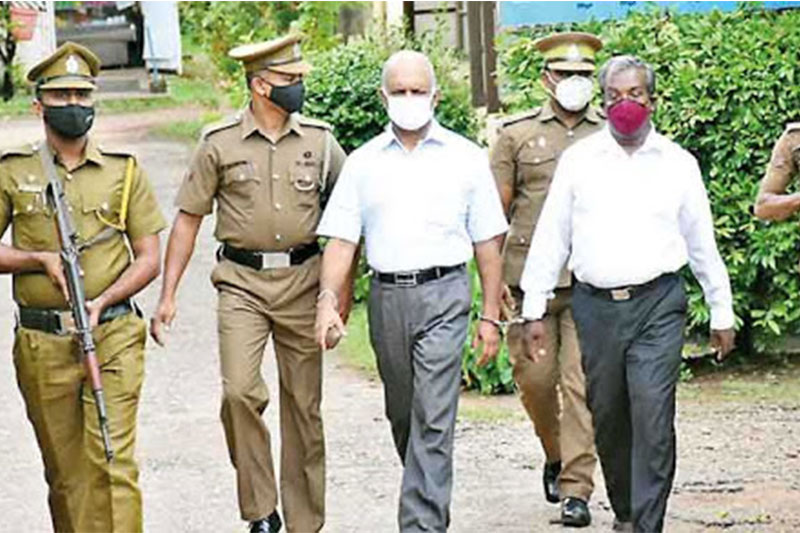 Former CID officer and police sub-inspector Rannulu Sugath Mohan Mendis, who was arrested in August as part of the witch hunt against Shani Abeysekara, has been suffering
symptoms of COVID-19 for over two days in the Mahara remand prison.

Despite his worsening symptoms, which include severe head and body aches, fever, a cough and breathing difficulty, prison officials have so far refused to give him a PCR test or any kind of medical treatment including even Panadol or pain killers.

When he was arrested in August, SI Mendis told the Gampaha magistrate that he was pressured by Colombo Crime Division (CCD) officers to fabricate evidence against Shani Abeysekara, and that he was promised he would not be arrested if he helped the CCD to put Abeysekara behind bars.
Mendis said he refused to lie about Shani, and that is what led to his arrest, naming the officers who pressured him, as well as those who were present.

Last month, Abeysekara himself contracted COVID-19, and was removed from hospital and transferred across the country to the Welikanda military facility in Polonnaruwa. It was only after a public outcry, pressure from the Human Rights Commission, ICRC and opposition MPs that prison officials agreed to transfer Abeysekara to a hospital.

By the time Abeysekara, who is a diabetic with high cholesterol and blood pressure, was brought back to Colombo and admitted to the Infectious Disease Hospital (IDH), he had suffered a heart attack. While he is being treated at IDH, Attorney General Dappula Livera has written to the hospital seeking grounds to discharge Abeysekara and put him back into a prison cell.

There is fear that Mendis, who is a key witness and victim of the witch hunt against Shani Abeysekara, will be denied medical treatment and be allowed to suffer to silence him and cover up the attempt to wrongfully jail Abeysekara.