The Sri Lankan agent of India's Adani Ports and Special Economic Zone Ltd., the company which received an in-principle approval to sign a deal with the Sri Lanka Ports

Authority to develop the Eastern Container Terminal of the Colombo Port, has been revealed to be a close friend of Prime Minister Mahinda Rajapaksa, according to social media reports.

According to the media reports, the Adani Group's representative in Sri Lanka is Sathak Abdul Kadar, an Indian national. He is the Chairman of Serendib Flour 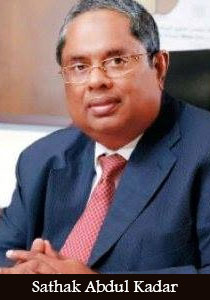 Mills and is also the local agent of Adani Global, a coal importer in Sri Lanka.

India's Adani Group has already launched a number of initiatives in Sri Lanka together with 'Pyramid Wilmar', a Singapore-based company that is a major business partner of the Adani Group.
Pyramid Wilmar is the same company that acquired a 10 acre property (formerly the location of the Army Headquarters) and developed the Shangri-La hotel.

The local agent of 'Pyramid Wilmar' is millionaire entrepreneur Sajad Mowzoon, who is also a close confidant of the ruling Rajapaksa family.


Company receives approval for a partnership

More details can be found here.
Who is Gautam Adani? 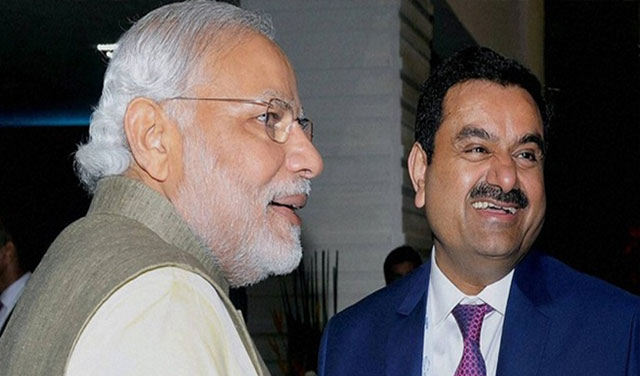 He is regarded as one of Indian Premier Narendra Modi's closest business associates and has been the main donor for Modi's election campaigns. As such, Gautam Adani has received the full patronage of the Indian government for his business ventures.

Indian media reports suggested that the rise of Adani in the business world seemed to have gone hand in hand with Prime Minister Modi’s ascent to power.

During his tenure as the Chief Minister for Gujarat, Adani Enterprises’ assets grew by 5,000% and by the time Modi ended his tenure, Adani was a billionaire with a net worth of USD 2.6 billion.
This friendship continued to bear fruits after Modi’s shift to Delhi. In just the first four years of Premier Modi's rule, Adani’s net worth has more than quadrupled to USD 11.9 billion.

Indian media reports say that Gautam Adani was able to ink 15 deals related to defence, logistics and power with many of the countries that Modi visited. Adani was among the businesspersons who accompanied Modi on many of these foreign trips.

The infamous Carmichael mine project, which has been witnessing protests in Australia since its inception for financial irregularities and tax evasion, was pocketed by Adani during Modi’s visit to Australia just a few months after he became Prime Minister.
In the same visit, it was announced that State Bank of India, India’s largest public sector bank, would provide a loan of USD 1 billion to Adani for this Australian project.

The reports further pointed out that within two months of Modi coming to power, public sector banks under the Reserve Bank of India’s 5/25 refinance scheme have restructured and refinanced loans of many corporates—extending the loan repayment periods from 10 years to 25 years.

"The Adani group has been one of the main beneficiaries of this scheme. From the financial press, we know that at least Rs 15,000 crore of Adani power’s loans have been restructured, extending the loan repayment period from 10 years to 25 years with a 15-month moratorium on interest payments," one report said.

Trade unions silent!
Meanwhile, a preliminary agreement in regard to the operations of the ECT was signed in 2019 by the Adani Ports and Special Economic Zone Ltd.

In the run-up to last August's parliamentary elections, workers of the Sri Lanka Port Authority (SLPA) protested against the sale of the Eastern Container Terminal to India. President Gotabaya Rajapaksa promised the SLPA trade unions that the agreement would be reviewed.

However, that commitment was not made in writing, and the trade union leaders, after having discussions with the government, suspended their trade union action abruptly and went into silence.

It is reported that the decision regarding Adani Group was taken after this meeting.

Japan is also involved in the agreements pertaining to the development of the Eastern Container Terminal.
Furthermore, India, Australia, Japan and the United States have joined forces in the Indo-Pacific region to counter China's Belt and Road strategy.
The four nation bloc started a joint military exercise in the Bay of Bengal this week signalling a collaborative approach toward regional security and stability in the Indo-Pacific.