Sri Lanka has arbitrarily decided to terminate the Japanese-funded, US$ 2.2 billion Colombo Light Rail Transit (LRT) project, stretching from Malabe to Colombo Fort on the

In a letter to Transport Ministry secretary Monti Ranatunga, he noted that this project is "very costly and not the appropriate cost effective transport solution for the urban Colombo transportation infrastructure."

Therefore, President Gotabaya Rajapaksa has directed to terminate the implementation of the project and close the project office with immediate effect, he informed.

This decision has created confusion and misdeed among authorities of Japan International Cooperation Agency (JICA) which has already signed the loan agreement and the transport ministry has called tenders to award the contract to build the Colombo LRT system, informed source said.

The government’s priorities have shifted from mega projects to micro-level initiatives such as irrigation, agriculture, the 100,000km road project and 150,000 household water connections, he said.

“Since the JICA agreement is an official loan contract, the government has to start negotiations and cancel it,” a senior treasury official said.

A cabinet committee that is reviewing projects is yet to present its report. However, various government sources indicated from earlier this year that the JICA-backed LRT was off.

They also said the project was likely to be a public-private partnership (PPP) rather than loan-funded.

This prompted JICA to urge the Sri Lanka Government in writing to follow “due process” if it intended to shift from Japanese funding to a PPP.

In a strongly worded letter to the Treasury Secretary in June this year, JICA’s Sri Lanka Representative Fusato Tanaka expressed “great shock” at hearing that “the current government has decided not to obtain JICA loans and instead to implement the project as a Public Private Partnership, and that necessary action would be taken to select a private investor."

However, the Ministry of Transport said that it has decided to temporarily suspend the Colombo-Malabe Light Railway Track System Project.

In March last year, JICA signed a loan agreement with the Sri Lankan government to provide an official development assistance (ODA) loan to introduce a LRT system with 16 stations distributed over 15.7 kilometres of track in and around Colombo.

The project would use Japanese technology including rolling stock and electromechanical equipment. Completion was due in April 2026. The loan has a 12-year grace period and the interest rate is 0.1 percent.
Early termination to cost $100 million?

The government will have to incur a loss of around US$ 100 million if the LRT project is suspended or if there is a delay as a result of renegotiations. The entire project is currently scheduled to be completed by early 2025.

In addition, there will be certain penalties from the Japan International Cooperation Agency (JICA) – the funding agency of the project – as Sri Lanka has already signed an agreement on the project, a senior official closely connected to negotiations with JICA revealed.

The total consultancy cost of the project is estimated at around US$ 140 million for seven years, including the feasibility review, detailed design, evaluation assistance, and construction supervision inclusive of all government taxes. 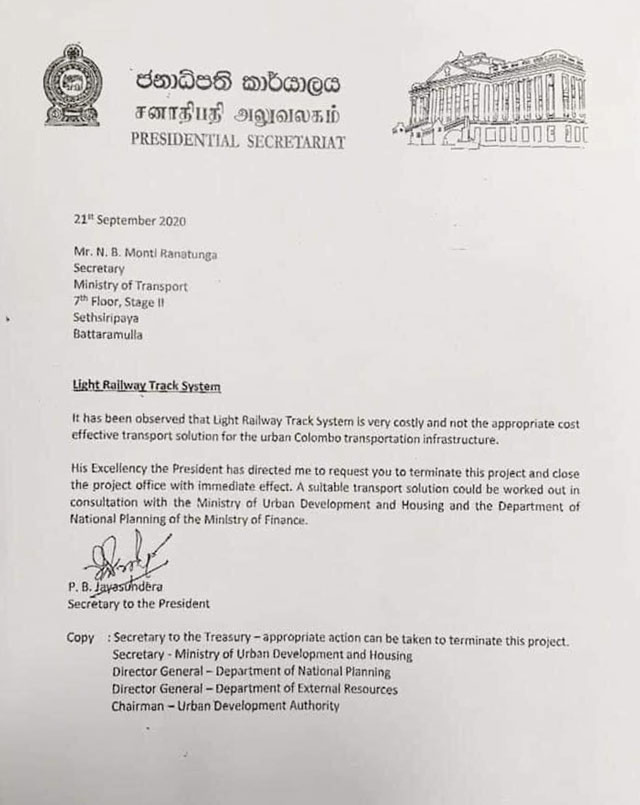