The East Container Terminal (ECT) in the South Harbour of the Port of Colombo has become a flashpoint of nationalist agitation. Agreement had been solemnly
concluded to develop the ECT in collaboration with the governments of India and Japan. Some, fronted by trade unions, are agitating to scrap the agreement, and make the terminal one that is fully owned and operated by the Sri Lanka Ports Authority (SLPA). Hoary arguments about selling national assets are being trotted out again.

What would a true patriot do?

True patriotism asks what advances the life chances of the people living on this island; it asks what reduces the harms that may befall them. A realistic assessment of the problem at hand must be the first step.

The Port of Colombo comprises operations by three entities: the CICT which handles 40% of the business through one terminal is majority-owned by China’s CM Ports (SLPA has 15% ownership); the SAGT is 85% owned by a consortium including JKH, Maersk/APM Terminals and Evergreen Marine Co. (SLPA owns the rest); and JCT which is fully owned by the SLPA. The ECT is the second terminal to be made operational in the South Harbour which remains the only deep-water port in the region capable of accommodating the largest ships. The Port of Colombo was the 25th largest in the world in 2018, in terms of container throughput, and showed rapid growth before the recent disruptions.

An economy the size of Sri Lanka’s cannot support the world’s 25th largest port if all it handles is cargo originating from and terminating in the country. More than 70% of Colombo’s cargo is coming from or going to India. India’s two largest ports are JNPT in Maharashtra and Mundra in Gujarat. Colombo handles more Indian boxes than Mundra, arguably making it India’s second largest port.

If for some reason the Indian containers were not transshipped through Colombo, the losses to the Sri Lankan economy will be grave. The earnings from what is essentially an export of port services will cease. Colombo will no longer justify frequent liner service. Sri Lankan shippers will have to send their containers in small ships to a regional hub to be transshipped to the large vessels that no longer call at Colombo.

Hub ports enjoy economies of networks. The more ships call at a port that provides transshipment and related services, the more attractive that port becomes to other ships. It provides a degree of stickiness to a hub, but hub status is not permanent. If the quality of the services provided declines or prices are higher than those in competing ports, a big shipping alliance (three alliances are responsible for 80% of the container traffic) may pull back leading to the unravelling of hub status.

One of the reasons Colombo is a preferred port for shipping alliances is its turnaround time: how quickly can a ship leave the port after unloading/loading. It is behind Singapore and other leading ports, but quite a bit ahead of Indian and Bangladeshi ports. However, the strikes that were launched before the elections on political matters unrelated to working conditions may be putting Colombo’s reputation at risk.

Alternatively, a government decision based on geo-political considerations may trigger the process. Especially before elections, Indian politicians come up with plans to build ports in the south of India that will create new employment and business opportunities and ‘save’ the $ 100 per container they claim goes to Colombo for transshipment. But the more real danger is the significant Chinese stake in Colombo Port which may be seen as a strategic vulnerability in the context of the simmering tensions between India and China. The Port of Colombo, which is dependent on transshipment business from a single country, is especially vulnerable in this regard.

Even if one focuses solely on the Port of Colombo, the geo-political factors loom large. The largest terminal is owned and operated by a Chinese company. The refuelling of Chinese submarines in the port in 2014 was a source of serious friction. The tensions between India and China are at a historical high currently. In this context, a decision to give an Indian company a stake in the ECT, and thereby in the success of the Port of Colombo, would give comfort to the security wall as in New Delhi. It makes eminent sense in terms of safeguarding Colombo’s hub status and revenue stream.

Whatever decision is taken about ECT will be interpreted in a larger context. Prime Minister Mahinda Rajapaksa has asked India to withdraw its interest in the under-utilised and money losing eponymous Airport located in Mattala. The government is also reported to have asked India to give back the rights to the unused but controversial oil tanks in Trincomalee. The Indian government is likely to connect the dots in ways that reinforce the perception that the Rajapaksas are tilting toward China.

But what about not selling national assets?

The land and the location are not sold. The port continues to be owned by the SLPA. It is simply one section of south harbour that is to be concessioned out for a defined period for a specified purpose to a consortium that will also include the SLPA. The land by itself does not produce value. Value is produced when the right kinds of investments (including the right kinds of gantry cranes, not what were ordered for a different location) are made and the right kinds of services at appropriate levels of quality are supplied. Because of the relative power of shipping interests, it is now common practice to allow shippers to have stakes in terminals. This is the case even in the highly efficient state-owned Port of Singapore.

For over two decades, parts of the Port of Colombo have been privately operated based on long-term contracts. Some of the members of the consortium that invested in SAGT in 1999 are foreign. CICT, the terminal that showed the best performance, is at $ 600 million, one of the largest Chinese investments. It has been operational since 2013. The relationships leveraged by those companies and the efficiencies they have introduced have contributed to the Port of Colombo flourishing even when the Indian economy slowed down.

This experience alone should give comfort to those concerned about foreign investment in Sri Lanka’s infrastructure. The land is here, the millions of dollars in investment is fixed to that land and cannot be taken away, and the market relationships and skills the investors have brought have caused the entire port to improve. Sri Lanka earns from the export of port services, those who work for the partially foreign-owned companies make a good living, they all pay taxes, and the national economy benefits by having the 25th largest port in the world with direct sailings to key markets.

A true patriot will understand that foreign investments in commercial enterprises are superior to foreign loans. In the former, the risks are shared. If the investment does not make profits, the foreign investor too is out of pocket. Thus, the investor has incentive to make the business succeed. This is not the case when loans are taken to build and operate infrastructure on our own to satisfy some atavistic yearning. With loans, the risks are all on our side. Whether the business succeeds or not, the loan must be repaid. If something goes wrong, as has been repeatedly the case with the Norochcholai electricity generators built with Chinese loans, The China Ex-Im Bank does not suffer. Only we do.

So, a true patriot will not only understand the nature of modern port operations and the difference between loans and investment. She will also understand the geopolitical context and support the taking of precautionary measures to build the confidence of major actors such as India who can easily stymie efforts to advance the well-being of our citizens and reduce the harms that may befall them. A true patriot will support the government in its efforts to honour legal commitments and strengthen Sri Lanka’s most important relationship, that with our giant and proximate neighbour. 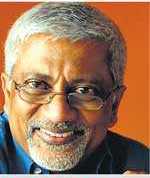