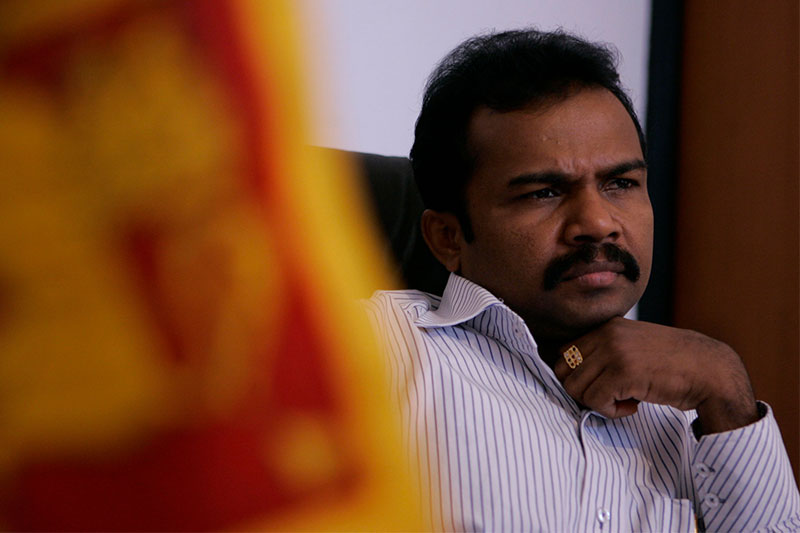 Former LTTE commander and armed group leader Vinayagamoorthi Muralitharan, known as Karuna Amman, speaks to the media  at his office in Colombo as

minister for national integration in the Sri Lankan government, May 2009. © 2009 AP Photo/Eranga Jayawardena

The Sri Lankan authorities have ordered an investigation into a former commander of the separatist Liberation Tigers of Tamil Eelam (LTTE) after he publicly boasted about killing several thousand Sri Lankan soldiers during the country’s civil war, which ended in 2009. He killed more soldiers, he reportedly said, than Sri Lankans had died from the coronavirus.

In truth, Vinyagamoorthy Muralitharan, who is better known as Colonel Karuna Amman, should have been criminally investigated long ago for war crimes. During the 26-year armed conflict, the LTTE was responsible for countless grave abuses, including unlawful killings and attacks on civilians. Forces under Karuna’s command were implicated in the summary execution of several hundred police officers in June 1990, after they had surrendered to the LTTE. The following month his forces executed about 75 Muslim travelers. And in August that year, his forces were allegedly responsible for killing more than 200 civilians in Batticaloa district.

Even after Karuna split from the LTTE to lead a pro-government armed group in 2004, his alleged crimes were never investigated. Instead his forces committed more abuses, apparently this time on the government’s behalf. The United Nations, Human Rights Watch, and others reported that Karuna’s group, known as the Tamil Makkal Viduthalai Pulikal (TMVP), was responsible for enforced disappearances, torture, and child recruitment.

Karuna has never been held accountable for his alleged crimes. In 2007 he was arrested in the United Kingdom for traveling on a false document. He testified that his fake diplomatic passport was provided by the then-defense secretary, Gotabaya Rajapaksa, now Sri Lanka’s president. Mahinda Rajapaksa, who is currently the prime minister but was then the president, appointed Karuna a government minister in 2009.

Sri Lankan authorities should investigate and appropriately prosecute Karuna for war crimes and other grave human rights abuses. But with President Gotabaya Rajapaksa in office, himself implicated in war crimes, there remain concerns that Karuna will once again escape justice.
Meenakshy Ganguly - HRW