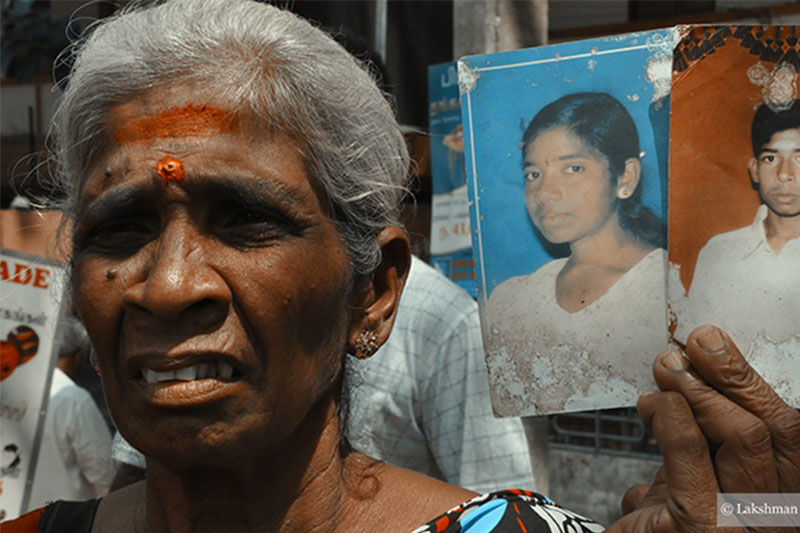 A tamil mother holds two photographs of her missing relatives during a protest in Jaffna, March 14, 2018 | © Lakshman Warnakulasooriya / JDS
Hundreds of parents still searching for their children who went missing in detention during the final phase of the brutal civil war in Sri Lanka which ended eleven years back have turned to the majority Sinhala people seeking their support.

After the bloody battle came to an end as announced by the Government, the next few days following the 18th of May 2009, saw numerous people either surrendering or being handed over to the Sri Lankan Army.

And, that was the last time anyone saw or heard of them.

Prior to that fateful final week of the war, the Sri Lankan army went on a blitzkrieg coupled with announcements asking the public in the war struck zone to cross over to the ‘safer side’ under what they called a ‘humanitarian operation’ to save the lives.

The hand over rook place in the presence of no witness except for the surrendered, their relatives and captors. Places like the Vattuvakal bridge stand silent testimony to the last moment that the loved ones saw each other.

Marking eleven years since the end of the brutal war and 1200 days of ongoing protest, a mother has now written a passionate appeal to the moderate Sinhala people, progressives, social activists, and Sinhala media persons to support the Tamil victims in their search for truth and justice.

Her name is been withheld due to fear of reprisals.

The mother who had been in the forefront of the continuous street demonstrations for more than a thousand days, says in her appeal the Sinhala people should be told of the atrocities both past and present against the Tamil people in such a way that the truth will kindle their conscious and stand against the ‘policy of hatred’ adopted and fanned by successive governments.

“Through such actions they should treat us like brothers and create an atmosphere, so that they come forward to fight for us,” says her appeal to the Sinhala community.

This appeal comes few months after the Sri Lankan Government announced its withdrawal from their 2015 co-sponsored resolution- 30/1 in the United Nation’s Human Rights Council and the eleventh anniversary of their loved one being handed over to the government forces only to go missing.

The earlier said to be ‘National Unity Government’ came forward to co-sponsor the resolution, which sought to establish credible investigation and accountability for what happened during the final phase of the war, with international participation.

Foreign Minister Dinesh Gunawardane criticised the earlier government as “it jettisoned the home-grown reconciliation process progressing at that time, and in an unprecedented move in the UNHRC, and in contrary to Sri Lanka’s foreign policy stance on country specific resolution, co-sponsored the UNHRC resolution 30/1 on the situation of the country”.

Over the past decade none of the governments have not brought any solace to the relatives and siblings of the ‘surrendered, disappeared, missing, and handed over’ or under any other definition it may be called.

At least seventy parents have lost their lives during protests over the past decade searching for their loved ones, whom they handed over to the Sri Lankan military.

The appeal from the mother, copy of which was seen by us, slams successive Sri Lankan governments for “hoodwinking the international community”, under the guise of the local investigations and establishing the ‘Office of the Missing Persons’- OMP.

Though mandated by an act of Parliament the OMP to inquire, find out, and report back to the family and award compensation, no tangible results have come forward.

Families of missing persons say they have lost confidence in the OMP as they have not even found out even five persons among the tens of thousands of individuals who crossed over to the Military controlled areas.

‘’The present-day rulers know the fate of our children. The international community should either make them say what happened to the missing persons or they themselves should come with the truth”. 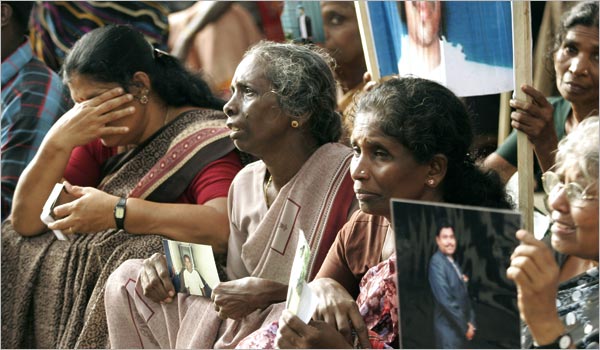 “It’s a false narrative of both the circumstances of the 30-year separatist conflict and also the number of casualties”.

The Sri Lankan Government have told the UNHRC it would continue to work with the UN and its agencies, including the regular human rights mandates/bodies and mechanisms and “seek as required, capacity building and technical assistance, in keeping with domestic priorities and policies”.

But, going by past experiences, it seems the Sri Lankan government neither has the political will to reveal the truth about the missing nor it seems to be one of their priorities although a 2018 law criminalises enforced disappearances.

As Sri Lanka still ranks low in the press freedom index, will the Sinhala media come forward to highlight the agony and plight of the thousands of war affected- to the Sinhala mass, kindling their conscious in seeking answers from those whom they have elected to lead the government and the country- seeking justice for those who have suffered untold miseries and continue to live clueless about the missing relatives.
Source: JDS
Related News:
Families of ‘forcibly disappeared’ threatened
“Erased” Tamil victims challenge UN rights chief’s latest report on Sri Lanka