This month marks 11 years since the Mullivaikkal massacre which shook the Northern Province of Sri Lanka back in 2009 with the brutal killing of nearly 50,000 Tamils over just a
few days. The war may have drawn to a close, but the island’s minority Tamils continue to be discriminated against severely by the majoritarian government, which has been increasingly emboldened in its subjugation of Tamils since the rise of Gotabaya Rajapaksa to power following the country’s 2019 presidential election.
Rajapaksa orchestrated the Tamil genocide, which culminated in several tens of thousands of Tamil deaths, and his re-emergence has once again vitalized widespread anti-Tamil sentiment that the island’s Sinhalese contingent has harbored for decades. Eleven years following the end of the war, Sri Lankan chauvinism and bigotry toward Tamils remains rampant. 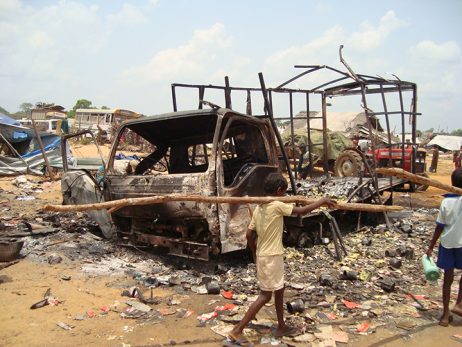 In Tamil-majority districts, the end of the war has not been synonymous with the withdrawal of troops. Sri Lanka’s Northern and Eastern provinces continue to see high levels of militarization, with 16 of the Army’s 19 divisions stationed there. Meanwhile, Tamil-majority cities like Vavuniya see a ratio of one soldier to every three civilians. In fact, the Sri Lankan military has only grown since the end of the war, with approximately 200,000 personnel in 2009 to over 400,000 currently. Although large-scale shelling of Tamil hospitals and villages has stopped, Tamils are routinely stopped and searched without explanation at military checkpoints, while reporters are censored and attacked. Nadarajah Kugarajah and Thusanth Nadarasalingam are just a few out of countless Tamil journalists who have been assaulted or sent death threats over the past year alone.

Police violence is also rampant and disproportionately affects Tamils. Demonstrators demanding answers to the whereabouts of their abducted children or the return of their ancestral lands are told to clear out without notice. Tamils are reprimanded for commemorating their deceased. Sri Lankan officials have long glossed over the pain and agony present in Tamil families who have lost loved ones to artillery fire or enforced disappearances by the Sri Lankan state, which has been admonished time and time again by supranational human rights organizations for its ongoing use of torture against ethnic minorities. 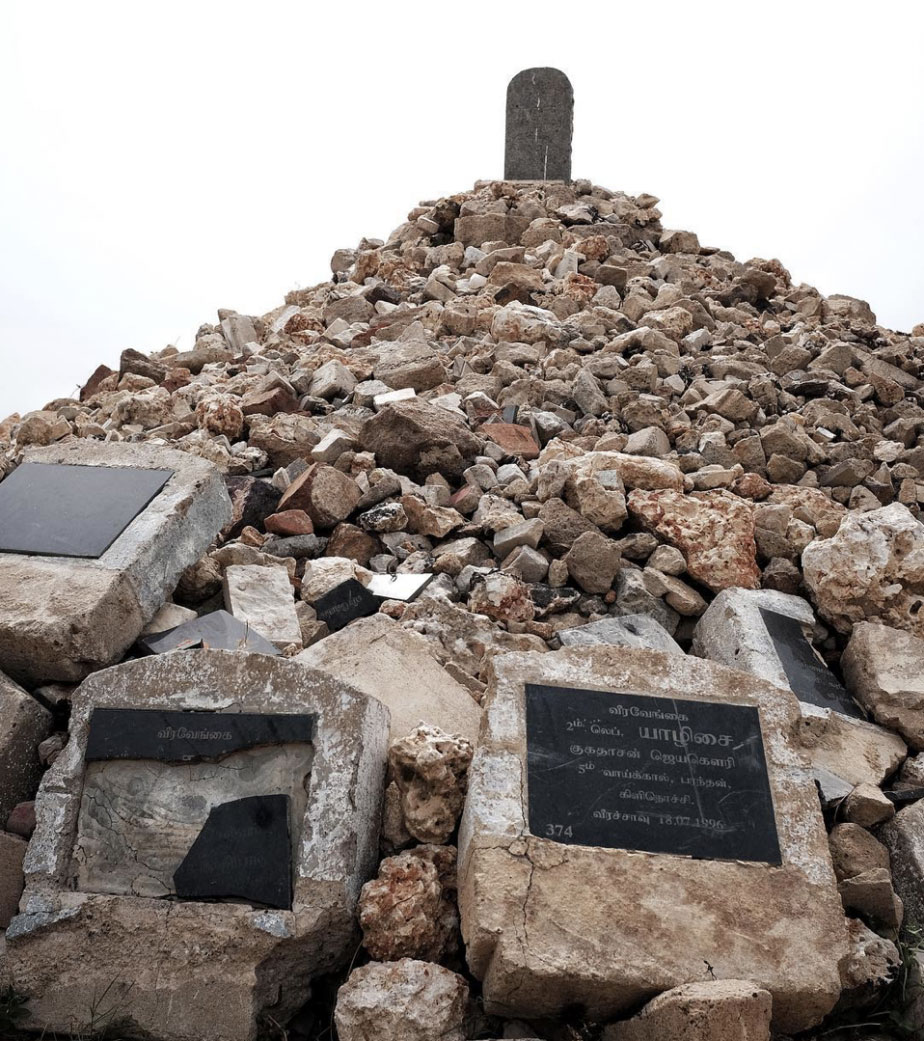 Only as recently as late 2019 did the Sri Lankan government publicly admit to this fact, explaining in dreadful detail how the bodies of Tamils who were kidnapped in white vans without number plates were fed to crocodiles in local reservoirs. The state has still not been tried for such heinous war crimes in an international court of law, as the international community continues to push for a sense of artificial unity on the island over genuine accountability and justice. Such was the case in the wake of the 2019 Easter Sunday bombings, when the same Sinhala Buddhist mobs who preached the necessity of Sri Lankan togetherness also attacked Muslims in large numbers in several Sri Lankan villages.

Students are intimated and subjected to violence and most curricula on the island’s history — particularly as upheld by schools in Sinhala-majority provinces — are monolithic, glossing over its rich Tamil culture and venerating Sinhalese kings and Buddhist ideologies in its stead. The burning of the Jaffna Public Library in 1981 by a Sinhalese mob, which saw the destruction of countless works of Sangam literature, palm leaf manuscripts, historical documents and other priceless books, was not an isolated incident. The cultural genocide of Tamil heritage must not be regarded as solely of the past, with Tamil statues being defaced as recent as 2020 by Sinhala Buddhist civilians who enjoy impunity from vandalism, property demolition and homicide of Tamils as granted by the Sri Lankan government.

This fanaticism also manifests through the destruction of Tamil temples and cemeteries and the coerced construction of Buddhist viharas in their place. Most of these shrines are built without the permission of district leaders and are justified through narratives of Sinhala elitism and Tamil inferiority, concepts embedded in everyday Sri Lankan life. From the Sri Lankan flag, which overtly renders Tamils as subservient to the island’s Sinhala majority, to state-sponsored settlements in Tamil-majority provinces and the normalization of Sinhala supremacy in the country’s constitution, it is clear that the end of the civil war on the island put an end only to tank fire and ammunition, not to the deep anti-Tamil prejudice that led to a war in the first place. 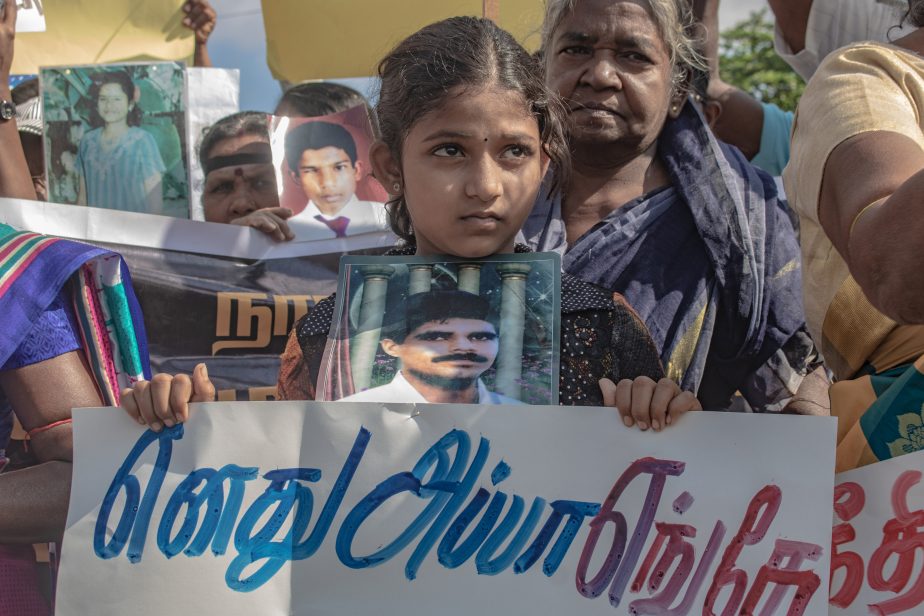 A young Tamil girl takes part in aprotest demanding that the Sri Lankan state take accountability for its enforced disappearances. She holds a sign that reads: "Where is my dad?" Photograpg by Kumanan Kanapathippillai

The Sri Lankan Civil War significantly affected Tamil fishermen, whose livelihoods were disrupted even further by Cyclone Roanu which affected nearly half a million people, claimed the lives of over a hundred and displaced over a hundred more in 2016. Funds raised by Tamils in the diaspora to help friends and family back home who were affected by the flooding were nearly the only monetary aid that Tamils received at the time, as the Sri Lankan government allocated very little of its budget to rebuilding the Northern and Eastern provinces.

Tamils also struggled to recover from the 2011 floods, which most greatly affected the Trincomalee, Batticaloa and Ampara districts and struck merely two years after the end of the war, as the trauma and distress of losing family members was still very recent. Today, the government’s neglect of its minority Tamil population remains unchanged, with the Rajapaksa regime paying no heed to the ruination of Tamil agricultural lands as a result of heavy shelling by the Sri Lankan Army, leaving farmers, plantation workers and merchants to toil on their own to sustain themselves. Meanwhile, civil service jobs on the island largely require Sinhala-language proficiency, immediately barring a large number of Tamils from applying. 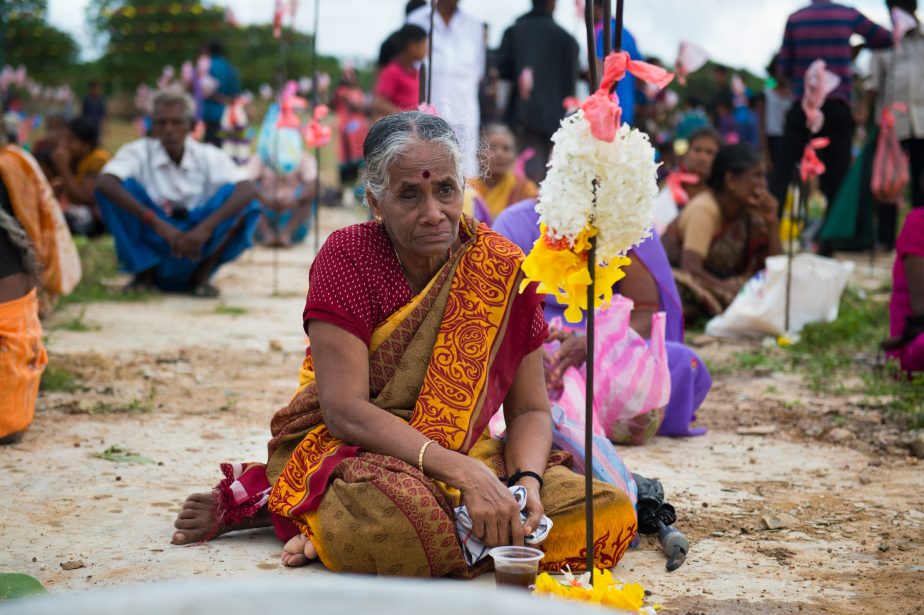 A mother sits in front of a destroyed "thuyilum illam," or ""resting home" on Maaveerar Naal, an annual day of remembrance for Tamil fighters killed during the war. Photograph by Priya Tharmaseelan

In 2019, the Peppermint Café in Colombo displayed a sign mandating that all staff speak in Sinhala or English only, and that Tamil was to be avoided. The incident led to outrage on social media, yet it must be noted that this incident is only one of countless incidents of linguistic discrimination Tamils have faced for decades in Sri Lanka. Coded in official policy, the Sinhala Only Act, passed into law in 1956, set a dangerous precedent for the treatment of Tamil as inferior to Sinhala. To this day, government notices and important documents are sent to Tamil families in Sinhala, a language most Tamils outside the Colombo bubble cannot understand. Tamil is often blacked out on signboards throughout the island and nearly no government official caters speeches or press releases to a Tamil-speaking audience, despite the language being an official language of the country. In many ways, Tamils are just as marginalized as they were back in 2009. From 1956 to the present day, the government’s advocacy of Sinhala supremacy has stayed static.

The Mullivaikkal massacre was one of the most gruesome pogroms in history, yet the persecution of Tamils did not cease when it did, nor does it show signs of stopping anytime soon. Ethnic conflict in Sri Lanka cannot be solved domestically; the country’s minorities have attempted this persistently over the past decades with little success. Rather, Tamils require an international mechanism. Until the world recognizes the suffering of Tamils and upholds justice through fair and egalitarian policy, the Tamil homeland will remain shrouded in an air of premeditated misery.

* Visvajit Sriramrajan is a journalist who writes on the intersection between minority rights and governmental policy in South Asia. He is on Twitter @vsvjt. The article was first published on The Diplomat: Post-War Sri Lanka: Fractured and Unjust for Tamils