In a bid to resolve the dispute between the Samagi Jana Balawegaya (SJB) and the United National Party (UNP), the General Secretary of the SJB, Ranjith Madduma Bandara has requested former Speaker Karu Jayasuriya to assume the leadership of the UNP.

Ranjith Madduma Bandara had intimated that they are willing to work together if Karu Jayasuriya is named as the Leader of the party.

Meanwhile, he had officially notified the Elections Commission yesterday (03) that they will contest the upcoming election under the 'Samagi Jana Balawegaya' led by Sajith Premadasa

Further, sources from the SJB said that they will announce the 'telephone', which is already registered under the party, as its symbol for the general election. 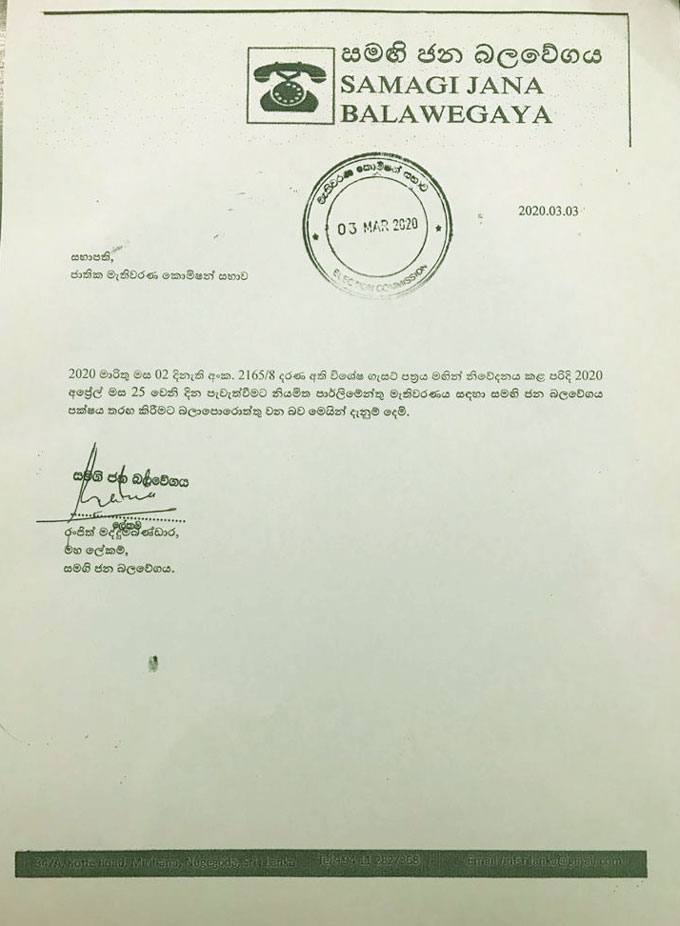 UNP Leader Ranil Wickremesinghe, who has decided to contest under the 'elephant' symbol for the upcoming general election, has directed UNP General Secretary Akila Viraj Kariyawasam to finalise the nomination list immediately.

Former Ministers Mangala Samaraweera and Malik Samarawickrama, in an effort to resolve issues centered on the 'symbol' between the Ranil faction and the Sajith faction, had met both Ranil Wickremesinghe and Sajith Premadasa separately, yesterday. However, those discussions have been unsuccessful as they could not come to an agreement.

Meanwhile, Ranil Wickremesinghe has appointed former MP Rajitha Senaratne as a mediator to resolve these issues.

Accordingly, Senaratne met the Leader of the 'Samagi Jana Balawegaya' Sajith Premadasa yesterday (03) and a second round of discussions are scheduled to be held with senior members of the UNP today.

No possibility of joining whatsoever - Naveen

In this backdrop, former parliamentarian Naveen Dissanayake has said that the UNP cannot join the SJB under prevailing legal conditions.

However, former parliamentarian Lakshman Seneviratne observed that it would be immensely disadvantageous to the UNP if they decide to contest the election alone.

Meanwhile, it is reported that UNP General Secretary Akila Viraj Kariyawasam is prepared to relinquish his post to consolidate the unity within the party.

This was revealed during a discussion yesterday (03), party sources said.

All political parties must inform the Election Commission of their intention to contest within seven days of the declaration of an election.