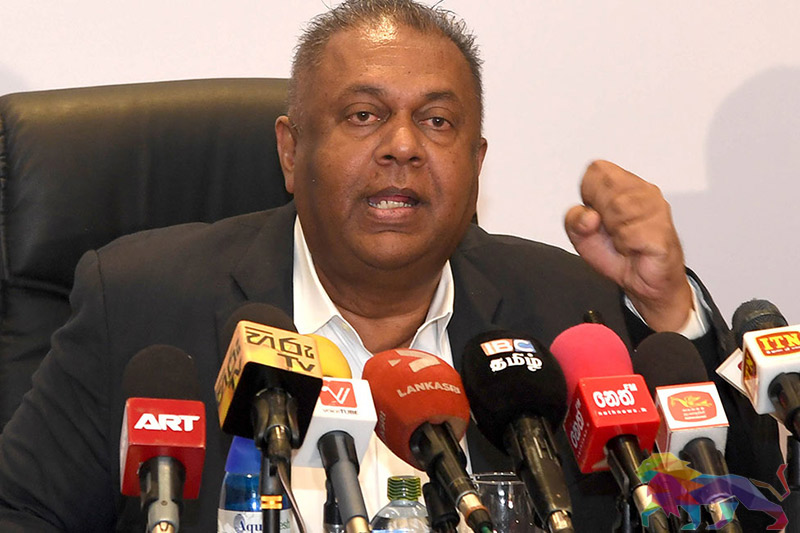 Finance Minister Mangala Samaraweera challenged SLPP Presidential candidate Gotabaya Rajapaksa to prove that he has renounced his US citizenship before the Nov. 16 polls.

Minister Samaraweera addressing a press conference at the Ministry of Finance on Wednesday noted that Gotabaya has still not renounced his US citizenship and pointed out that his wife and son continue to be fully fledged citizens of the United States of America.

"What should be of great concern to all Sri Lankans at this moment of time is not the MCC Agreement, but the fact that one of the principal candidates of the Presidential Elections to be held next week has still not renounced his US citizenship and his wife and son continue to be fully fledged citizens of the United States of America," the Minister said.
The Minister further said that said that all concerned citizens of the country should flood the US Embassy with requests demanding to know the truth about the renunciation of Gotabaya's citizenship.

In order to renounce the citizenship, a US passport holder must obtain a “Certificate of Loss of Nationality” with the US Treasury, where the DS 4079 is approved for renunciation.

In the first six months of 2019, about 1090 have been officially recorded as those who have renounced their US citizenship.

"However, there is no approved DS 4079 for Gotabhaya Rajapaksa in any of the 94 US District Courts," Samaraweera said adding that the filing could also be seated in US Embassy in Colombo to be cleared.

"Usually, transactions and procedural backlogs between the US Treasury and the US State Department are taking 16 to 24 months to clear. It is also a lengthy process due to the taxation portions if income and assets are greater than the stipulated amount.Even after approval by the State Department, there is further 6 to 9 months with the US Treasury when the DS 4079 is approved for renunciation, " he said.

"Therefore, it is extremely clear that Mr. Gotabhaya Rajapaksa remains a US citizen today, while being a candidate for the Presidency of Sri Lanka," the Minister noted.

The Finance Minister further noted that Sri Lanka will also have the dubious honour of having another American First Lady other than Melania Trump if Gotabaya wins the election.

"In fact, in the unlikely event of Gotabaya Rajapaksa winning on the 16th, Sri Lanka will have a President, who is a US citizen and Sri Lanka will also have the dubious honour of having the only other American First Lady in the world other than Melania Trump, the First Lady of USA," Samaraweera said.

"Therefore, I challenge Gotabhaya Rajapaksa to produce the “Certificate of Loss of Nationality” and the DS 4079, proving his renunciation of his American citizenship before the country goes to the polls next week," the Minister added.
Video