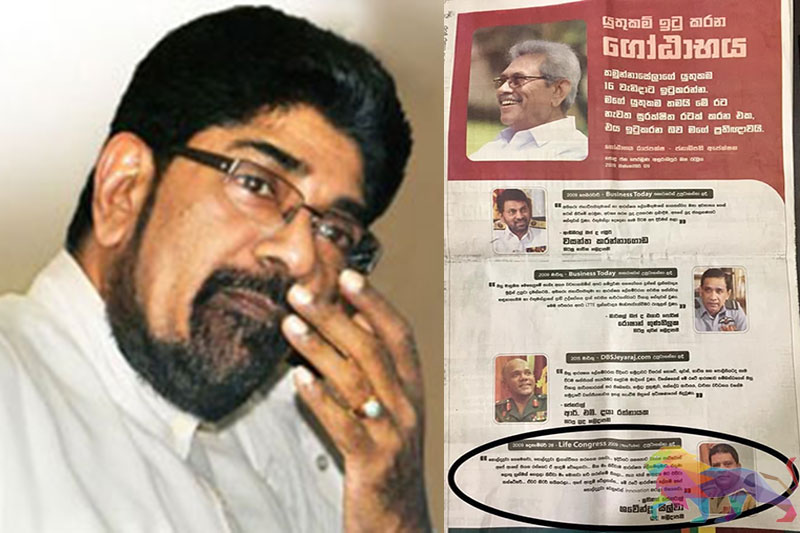 MP Keheliya Rambukwella, who is the spokesperson of the Sri Lanka Podujana Peramuna (SLPP) presidential candidate,

Gotabaya Rajapaksa has said the party was not aware of the recent newspaper advertisement which had stated several military officers had pledged their support to SLPP candidate Gotabaya Rajapaksa at this year’s presidential election.

Rambukwella has told the media, “We are not using anybody for political campaigns, but if some individual has made a comment that has to be dealt by the Election Commission. I didn’t see it but as far as our campaign is concerned, that sort of claims are not included.”

“If it’s in the social media, if one is suspecting that it is ours or it implies that it is ours, we don’t take any responsibility for it,” he has said at a news briefing.

MP Anura Priyadarshana Yapa has said, “We have no intention of doing such things. Because this country knows who won the war and who was involved with it. I really don’t know about this advertisement but we are not prepared to use that for political purposes.”

As for the National Election Commission (NEC) statement that it was prohibited to use war and war-victory for presidential election campaigns, Yapa has told the media that they were not going to use their military victory for their gain because the people were aware of it.

Meanwhile, MP Dr. Bandula Gunawardana has questioned the laws that the Elections Commission has said prohibited the use of the war victory and slogans in election campaigns.

Gunawardana has told a news briefing that he cannot figure out under what laws or regulations that the Elections Commission has said campaigners can’t use the war victory.

A recent advertisement published in the print media depicted statements by military chiefs including the incumbent Commander of the Sri Lanka Army extending support to the candidature of SLPP candidate, Gotabaya Rajapaksa.

Several election monitoring bodies lodged complaints with the Elections Commission over the use of the war victory and forces chiefs including the incumbent chief of Sri Lanka Army for election propaganda.