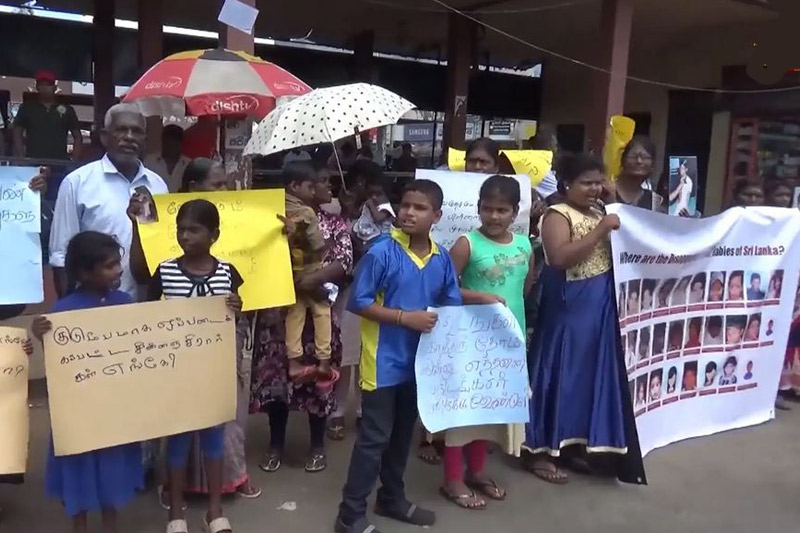 At least 29 children below the age of 14 have disappeared at the hands of the military according to new information released by Tamil mothers in Northern Sri Lanka.

This shocking revelation was made by relatives of the disappeared, in the booklet “Disappeared Tamil Babies of Sri Lanka” released to mark the International Childrens’ Day.

The youngest of the missing children is eight month old Mahalingam Ezhilini, according to the information on 29 girls and boys published in the booklet.

Ezhilini had gone missing with her mother, father and two sisters after they surrendered to the Sri Lankan military on 18 May 2009. The government declared the end of war a day later.

Highest disappearances in one day

Other than two children from the east, 27 of them have disappeared after Tamil families surrendered to the Sri Lankan Security forces on the same day.

This could probably be the largest number of child disappearances in one day at one place, in Sri Lanka.

The two children from the East have been abducted by the Sri Lanka military in 1990 and 1992. One of them was two years old at the time of the disappearance.

“Disappeared Tamil Babies of Sri Lanka” was distributed among the public at a protest in Vavunia by the Association for the Relatives of the Enforced Disappearance (North and East Provinces).

Tamil mothers have been protesting in the open for nearly a thousand days requesting the government to reveal the truth about their loved ones who surrendered.

The Office on Missing Persons (OMP) appointed by the government admits that at least 20,000 Tamils disappeared at the hands of the military ten years ago.

Nevertheless, after two years in office, it is yet to establish the truth about them.