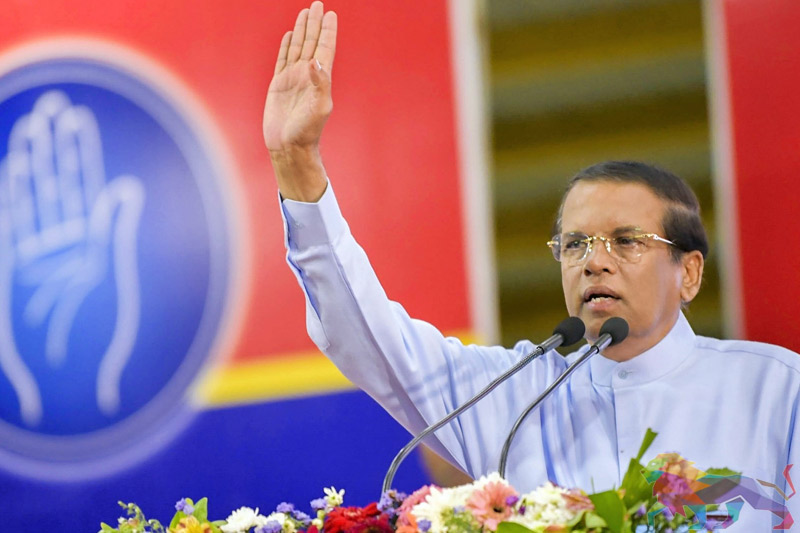 Speaking in Kurunegala yesterday (29), Sirisena said that Rajapaksa and SLPP presidential candidate Gotabaya Rajapaksa met him on Saturday (28) to discuss the elections.

The President noted that at the meeting, he had asserted that the SLFP will not agree to contest under “Pohottuwa” and instead had proposed that a common symbol be agreed on when forming an alliance between the SLFP and SLPP.

He has said his stance on contesting the election under a common symbol has been clearly conveyed to the Rajapaksa brothers.

“I told them that we can work for the victory of Gotabaya Rajapaksa under a national alliance, but never under the lotus bloom symbol of the SLPP; they did not agree to it,” the President has said, adding that the SLFP is prepared to back Gotabaya at the election but not at the expense of destroying the SLFP.

The President pointed out that the SLPP needs the support of the SLFP to win the forthcoming Presidential election.

The meeting between Sirisena and the Rajapaksas took place as an attempt to reach a consensus on working together at the presidential election.

Sources said that the SLPP leaders had proposed that the SLPP and SLFP contest the presidential election under the “pohottuwa” symbol and the parliamentary elections under another symbol.

However, United People’s Freedom Alliance (UPFA) General Secretary MP Mahinda Amaraweera said that no decisions had been taken at the meeting.

However, the SLFP said that both sides could not reach a final agreement on the matter.

Meanwhile, SLFP stalwart MP Duminda Dissanayake said that the party was currently against an alliance due to the disagreement over the alliance symbol.

“We are still uncertain of forming a coalition with the SLPP as we are opposed to the lotus bud symbol,” he said.

Meanwhile, President Sirisena has said that he is not ready to retire and a new step will be taken after December.

The President made this statement on Saturday (28) in Polonnaruwa that he is in good health and would not retire in order to continue his agenda for the country and the people.

“Some people may be thinking that I will disappear since I haven’t said that I will contest for the presidential elections,” he said speaking at an event in Polonnaruwa on Saturday.

The President said a new phase of the country’s development program as well as the Polonnaruwa development would be launched in next December.

However, a final decision on the SLFP’s stance at the upcoming presidential election will be reached at the SLFP Central Committee meeting scheduled to be held this evening under the President’s patronage.