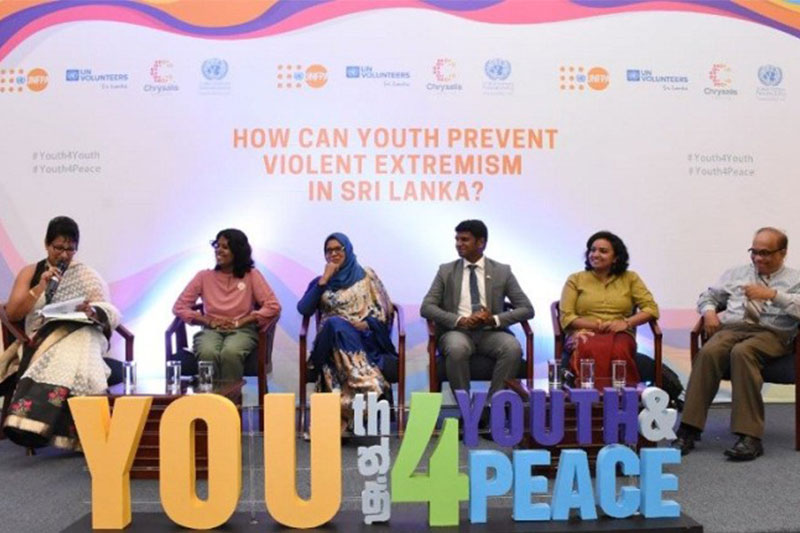 The United Nations says violent extremism has manifested in many forms over the past decades in post-war Sri Lanka, with the recent being the Easter Sunday attacks carried out by young suicide bombers.

The United Nations Population Fund (UNFPA) has said it is crucial that Sri Lanka ensures its advocacy and policies assist young people to steer their aspirations into peaceful avenues, to prevent violent extremism.

Understanding the role of youth in preventing violent extremism, the UNFPA and UN Volunteers (UNV) commissioned a study on ‘The Potential Role of Young Leaders and Volunteers in Preventing Violent Extremism in Sri Lanka’ in September 2018.

The study was conducted by the Regional Centre for Strategic Studies (RCSS), with a sample size of 2,800 young people between the ages 15-29 years from the Northern, Eastern, Southern, and Central Provinces. While the field study was carried out pre-Easter Sunday attacks, from November – December 2018, the findings revealed that 25% of Sri Lankan youth from the four provinces believed that their peers are attracted to ideologies of violent extremism.

Prof. Gamini Keerawella, Executive Director of the Regional Centre for Strategic Studies, had presented the key findings of the study on Tuesday (17), which was followed by a panel discussion with representatives from the public sector, private sector, youth organizations, and the media, in taking the recommendations forward.

Prof. Keerawella has said at the event, “Sri Lanka is sitting on top of a volcano when it comes to violent extremism and its potential to lure in youth. While a majority of young people are of the view that conditions within the country have improved since the end of the war, we cannot be complaisant. A well-coordinated plan of action at national and provincial levels to utilize skills and capabilities of youth leaders and volunteers must be systematically set up.”

The event also saw the launch of the ‘Youth Peace Panel’, introducing 30 young advocates for peace from all nine provinces, selected through an open-call process.

As part of UNFPA’s ‘Youth4Youth’ programme delivered in partnership with Chrysalis and supported by the UN Peace Building Fund, the ‘Youth Peace Panel’ is an independent and nonpartisan group of young leaders that aim to connect young people at grassroots level with key decision-making stakeholders and platforms to contribute towards peacebuilding efforts in Sri Lanka.

Speaking on the importance of the Youth Peace Panel, UN Resident Coordinator in Sri Lanka, Hanaa Singer has said, “I strongly believe that if we are to prevent violent extremism we need to encourage communication between people and groups who don’t share the same worldviews or life experiences. These conversations open the door to understanding and embracing the complexity of other communities, instead of seeing the world through simplistic narratives. Young people by interacting with their peers come to understand the underlying causes of exclusion and address these by finding common ground on which they can build trust. Only they can find ways to showcase and celebrate diversity as a strength and not a threat.  I hope the Youth Peace Panel will be a platform for young peacebuilders to begin these conversations that will build trust and understanding between communities.”

Chief Guest at the event, V. Sivagnanasothy, Secretary to the Ministry of National Policies, Economic Affairs, Resettlement and Rehabilitation, Northern Province Development, Vocational Training and Skills Development and Youth Affairs has said, “As a nation, we must ensure that systematic approaches are in place to harness the energy of young people to ensure peaceful coexistence. Youth play a crucial role in sustaining peace, and we must engage them in the peacebuilding process. I commend UN agencies for mobilizing young people to build peaceful societies.”