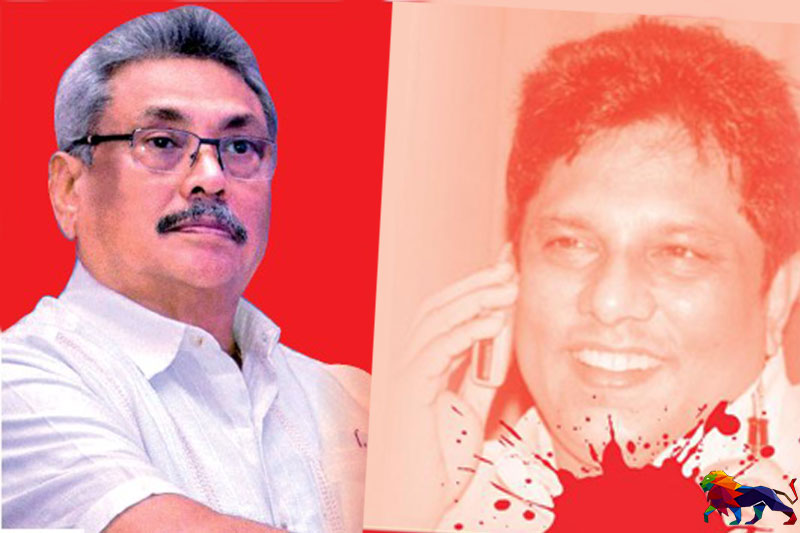 SLPP Presidential hopeful and former defense secretary Gotabaya Rajapaksa has asked America’s Central California District Court to stay the case filed against him involving the 2009 extrajudicial killing of Lasantha Wickrematunge until the end of the presidential election, pleading that reporting on the case is jeopardizing his electoral prospects.

The lawsuit “has created a media circus in Sri Lanka,” stated a motion to stay the suit filed by Rajapaska’s attorneys in court last Monday (26). “Many outlets in Sri Lanka’s national media have reported plaintiff’s unverified allegations against Rajapaksa – which he vehemently denies – as if they were conclusively established.”

“For example, the Sunday Observer, Sri Lanka’s most circulated weekly English-language newspaper, has published articles detailing the allegations with specificity, often in a way that is slanted against Rajapaksa,” the presidential candidate claimed. Continued litigation “would only exacerbate this reporting,” the motion stressed.

“In the intensity of an election campaign, every action by the court or the parties, in this case, will be disseminated, amplified, and potentially distorted in ways that are beyond this court’s control. This court could find itself a major factor in a foreign election, potentially even influencing its outcome.”

In support of this concern, a footnote to the motion emphasized that “there is a real danger that Rajapaksa’s opponents will mischaracterize his legal arguments at the motion to dismiss at this stage as concessions of the underlying facts”.The body of the motion, filed on behalf of Rajapaksa by his lead attorney, John C. Ulin of Arnold & Porter Kaye Scholer LLP, added that “activity in this court could mislead, or could be used to mislead, members of the Sri Lankan electorate as they head to their polling stations.”

A spokesman for Rajapaksa, former MP Dullas Alahapperuma, speaking to Sunday Observer however denied that the motion filed by Rajapaksa contained any averments that the case posed a threat to the presidential election campaign. “It was never mentioned that this case was a disadvantage to the election campaign,” Alahaperuma said. He further charged that the thrust of the motion filed by Rajapaksa was that the California murder case was filed with a political agenda in mind, citing the ten-year delay between Wickrematunge’s murder and the filing of the case.

The SLPP presidential candidate also argued that if he were to win the election and become President, he would become immune to any kind of prosecution as a foreign head of state. To support his case for this likelihood, he submitted a declaration from Sri Lankan journalist Malinda Seneviratne. After the May 2008 abduction and assault on The Nation deputy editor Keith Noyahr, the newspaper sold out to Rajapaksa loyalists, who then appointed Seneviratne as the new Editor of The Nation. “I have personal knowledge of and am competent to testify to the matters stated herein by virtue of my status as a journalist and political commentator in Sri Lanka,” Seneviratne’s declaration stated.

He claimed that Gotabaya “Rajapaksa is the probable victor in the December 2019 presidential election, citing unspecified “recent voting patterns”. However, the motion filed by Rajapaksa betrayed a serious concern that should the case continue, it would harm his electoral prospects.

Rajapaksa “is fully committed to a national election campaign, on which he will spend virtually every waking hour until 7 December 2019,” his attorneys said. “It would be unfair to divert Rajapaksa from the election campaign to participate in this case.”

The motion concluded by urging that a stay order would “promote the democratic right of Sri Lanka’s electorate to choose a candidate without the interference of publicity surrounding unproven allegations asserted in a foreign court.” Meanwhile, Rajapaksa’s criminal proceedings in domestic courts remain up in the air. The Court of Appeal is set to rule on 12 September on whether or not the Bribery Commission can continue to prosecute Rajapaksa in an Rs. 11.2 billion corruption scandal connected to the Avant Garde floating armoury. The former defence secretary obtained a stay order two years ago preventing that trial from proceeding after being enlarged on bail.


The following month, from 15 October, the Permanent High Court at Bar is set to begin day to day hearings in another financial crimes prosecution against Rajapaksa, in which he was indicted as the first accused with several others by former Attorney General Jayantha Jayasuriya for authorizing the alleged criminal misuse of over Rs. 30 million rupees in state funds to construct a mausoleum in memory of his parents.

However, Alahapperuma told the Sunday Observer that Rajapaksa would not seek similar stay orders or delays in any domestic criminal proceedings because those were not politically motivated cases unlike the civil litigation he faces in California over the Wickrematunge murder. “Hence, there is no need of bringing motions for the domestic court cases against Rajapaksa,” Alahapperuma said.

Rajapaksa has previously sought and successfully obtained several stay orders from the Court of Appeal and the Supreme Court preventing his arrest or prosecution in a number of criminal investigations, including the floating armory scandal, the monument case, the “MiG Deal”, share price manipulation and financial irregularities at Mihin Lanka.

Meanwhile, he has recently been cleared of wrongdoing by Attorney-General Dappula De Livera by being excluded from indictment in several emblematic cases in which his involvement was previously suspected, including the Welikada prison massacre, the Rathupaswala villagers shooting, the disappearance of Prageeth Eknaligoda and the assault by military intelligence officers on journalist Upali Tennakoon.
(Sunday Observer)