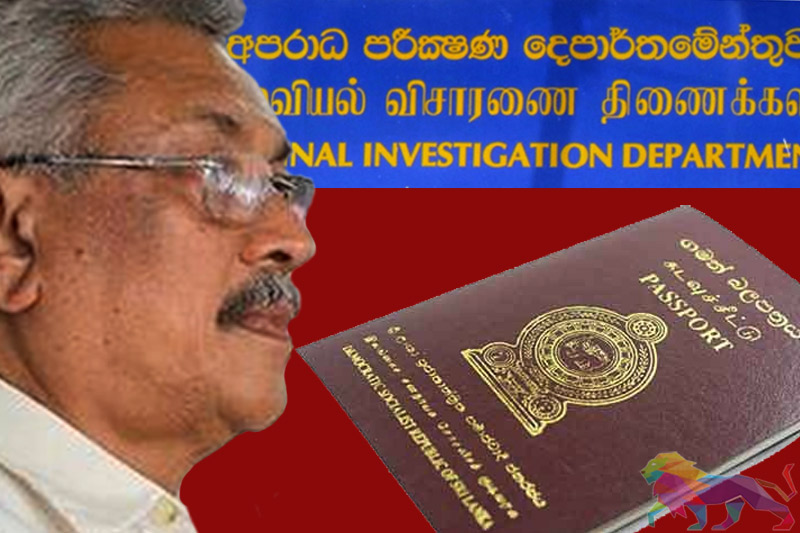 The CID was first assigned to probe several complaints received by the Acting Inspector General of Police (IGP) on the possible “criminal activity” involved in issuing a new Sri Lankan passport to Gotabaya.

However, a few days later the Acting IGP handed over the probe to the Colombo Crimes Division (CCD) from the CID.

Be that as it may, it is now learnt that the probe has once again been assigned to the CID following a report handed over to the Acting IGP on the preliminary investigations carried out by the CCD.

Gotabaya’s renunciation of the US citizenship and his re-application for Sri Lankan citizenship are two closely watched issues of the general public. However, Gotabaya has yet failed to provide a solid response to any of these issues.

It is in this backdrop that two civil society activists lodged complaints with the Acting IGP to investigate into the allegations of the irregularities in issuing a passport to Rajapaksa.

The complaints were lodged by Professor Chandragupta Thenuwara and Gamini Viyangoda calling on the Acting IGP to probe the allegations of “possible criminal activity” by Rajapaksa in obtaining the passport, declaration of dual citizenship and the disappearance of government records pertaining to these allegations.

Puravesi Balaya Convener, Viyangoda in his complaint has noted that Rajapaksa has publicly declared that he intends to contest the Presidential Election. “As you are aware all criminal proceedings against a person will cease upon their being elected as President,” he has stated.

According to Viyangoda, the Police should investigate whether criminal offences are disclosed by this information and whether Rajapaksa did indeed legally obtain dual citizenship in Sri Lanka after renouncing his allegiance to the country of his birth and pledging fealty to the United States of America in 2003.

The complaint lodged by Prof. Thenuwara, which does not name Rajapaksa, has noted that the “individual concerned” has had criminal proceedings instituted against him by both the Commission to Investigate Allegations of Bribery or Corruption (CIABOC) and the Attorney General for the alleged misappropriation of public funds and corruption.

Meanwhile, a complaint was lodged by Deputy Editor of the Anidda newspaper, Lasantha Ruhunage, the Elections Commission on the issue of the inclusion of Gotabaya’s name in the 2005 electoral registry of the Mulkirigala electorate. Gotabaya became a US citizen in 2003.

The complainant has called on the Elections Commission to take action against the head of the household, investigate whether the individuals so listed had actually cast their ballots in that poll, and urges that if persons had cast votes without the right to do so, that action be taken against them.

An extract of the Mulkirigala Electoral Register, which features the name “Nandamithra Gotabaya Rajapaksa” among the electors in the Rajapaksa family home has now been published in the print media and social media.

Gotabaya had purportedly obtained his dual citizenship only on November 30, 2005, after Mahinda Rajapaksa was installed as president.

By his own admission in an affidavit filed in the Supreme Court, Gotabaya arrived in Sri Lanka in late 2005 to ‘assist’ his brother Mahinda’s presidential election campaign.

He had done so on a tourist visa, since at the time he was an American citizen.

After his brother became President on November 18, 2005, Gotabaya purportedly applied for and obtained dual citizenship.

Rationalising its decision to lodge an official complaint, the Anidda newspaper’s editorial board has noted that manipulating or forging documentation is in itself a grave crime, since it paves the way for a multitude of other offences relating identity certification.

The Elections Commission is to conduct a probe on the complaint.