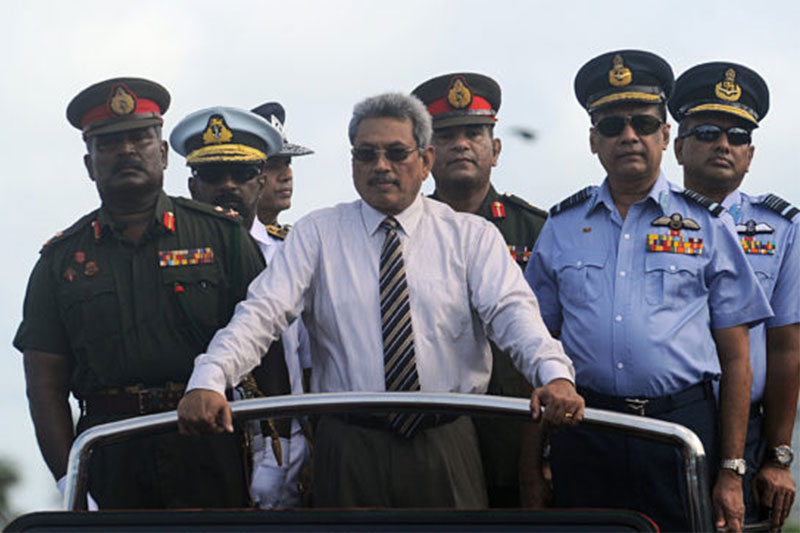 The “Pohottuwa” party’s presidential hopeful, former Defence Secretary Gotabhaya Rajapaksa has once again returned to his plans of militarizing the country, which was cut short when his brother, former President Mahinda Rajapaksa was defeated at the last presidential election in January 2015.

Gotabhaya, at the time of his brother’s electoral defeat, was heavily involved in the militarization of the country, including the education sector. Students from school to university were forced into a military structure resulting in the death of several university students during the military training programmes.

However, he has now decided to start from where he stopped in 2015.

The latest plan involves the setting up of a private army consisting of former forces personnel. It is no secret that during the Rajapaksa regime, there were several groups of elite forces personnel that were engaged in carrying out threats, intimidations, abductions and even murder.

One such group was used specifically to target and silence journalists and media institutions.

Gotabhaya’s moves of forming a separate security division is an indication of the return to the era of terror that prevailed between 2005 and 2015 under the Rajapaksa regime.

The Daily Mirror on Monday (5) under the headline “A team of volunteers to provide security for Gota,” has published a story stating that the Rajapaksa led, Sri Lanka Podujana Peramuna (SLPP) has made plans to set up a security force consisting of retired forces personnel.

Accordingly, 50 retired forces personnel will be recruited on a voluntary basis from each electorate.

Following is the full text of the Daily Mirror story:

“Sri Lanka Podujana Peramuna (SLPP) has decided to create a separate volunteer team for the security of former secretary of the Ministry of Defence, Gotabaya Rajapaksa who is tipped to be its presidential candidate at the upcoming election.

“A spokesman for the SLPP said that this force will be formed by recruiting 50 retired officers of the security forces and officers who had relinquished duties legally from each electorate.  The main responsibility of this force will be to assist his official security squad during the elections.

“He said the security provided by the government to him is insufficient and the party officials have focused their attention to implement a special security programme to ensure his security.  Awareness has been created among the all party organisers about this security arrangement.  The army officers who served with Gotabaya Rajapaksa have expressed their willingness to join this security programme voluntarily.  According to SLPP sources, Yoshitha Rajapaksa who is the son of former President Mahinda Rajapaksa is making necessary arrangements in this regard.”

What is interesting to note is that by recruiting 50 retired forces personnel from each electorate, Gotabhaya plans to set up a force with the strength of close to 8,000 personnel (160 electorates x 50).

Apart from the attacks on the media, the Rajapaksa regime became infamous for the murder of a fisherman during a protest against the increasing fuel prices, murder of a youth in the free trade zone for protesting to safeguard the private sector pension scheme, murder of civilians in Rathupaswala for protesting demanding clean drinking water and the murder of inmates in the Welikada Prison.

The formation of a private army by Gotabhaya would once again result in the use of brute and excess force to jackboot the nation.