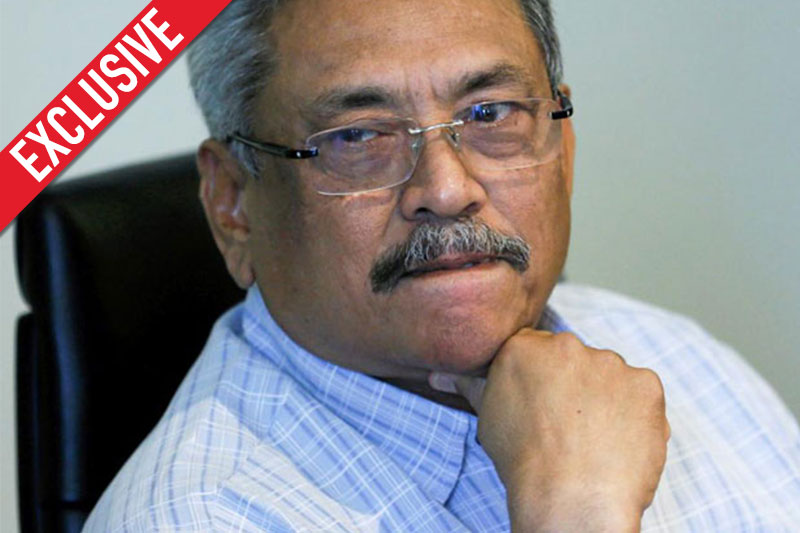 The issue of former Defence Secretary and presidential hopeful Gotabhaya Rajapaksa’s dual citizenship has taken a new twist with revelations that he had obtained his new Sri Lankan passport sans the “dual citizen” stamp without appearing in person and by applying after hours to the Immigration and Emigration Department.

It has also been revealed that Rajapaksa has not made an application under the Citizenship Act and that his new passport has been issued under a new National ID that is unconnected to border control records.

The Leader learns that Rajapaksa’s passport application was received and processed by the Immigration and Emigration Department on an urgent basis on May 7, this year after 3.00 p.m., which is the cut-off time for new applications.

Also, Rajapaksa had not appeared at the Immigration Department to be finger-printed, and the passport was issued in a matter of hours under a new National ID card number that is not connected to Rajapaksa’s previous NIC or border control records.

Rajapaksa has reportedly obtained the new passport from the Immigration and Emigration Department in May without the dual-citizen stamp.

According to Rajapaksa, this new Sri Lankan passport was proof that he was no longer a dual citizen under Sri Lankan law.

According to immigration officials, persons with dual citizen status are required to make a formal application under the Citizenship Act if they wish to regain regular Sri Lankan citizenship. However, Rajapaksa it is learnt had not followed this regular process, but had obtained a passport which did not indicate his dual citizenship status.

It is also learnt that the use of a new National ID card number for Rajapaksa when obtaining the new passport had prevented the immigration computer systems from automatically noting that he was on record as a dual citizen.

According to an affidavit filed by Rajapaksa before Sri Lanka's Supreme Court, he had returned to Sri Lanka in 2005 to assist with his brothers presidential campaign.

He had applied for dual citizenship on November 18,2005, which is interestingly, the day his brother was sworn in as the President of Sri Lanka.

It is now learnt that files on Rajapaksa’s dual citizenship are not at the Immigration and Emigration Department.

Rajapaksa’s application was given top priority although there was a large backlog of applications over several months. The computer system at the Immigration and Emigration Department has noted that while the dual citizenship was granted in November 2005, the data pertaining to Rajapaksa was only entered into the system on January 13, 2014.

When inquiries were made to observe the original documents, it had been revealed that there are no copies of the application, receipt of payment, or the dual citizenship certificate granted to Rajapaksa in the Department file.