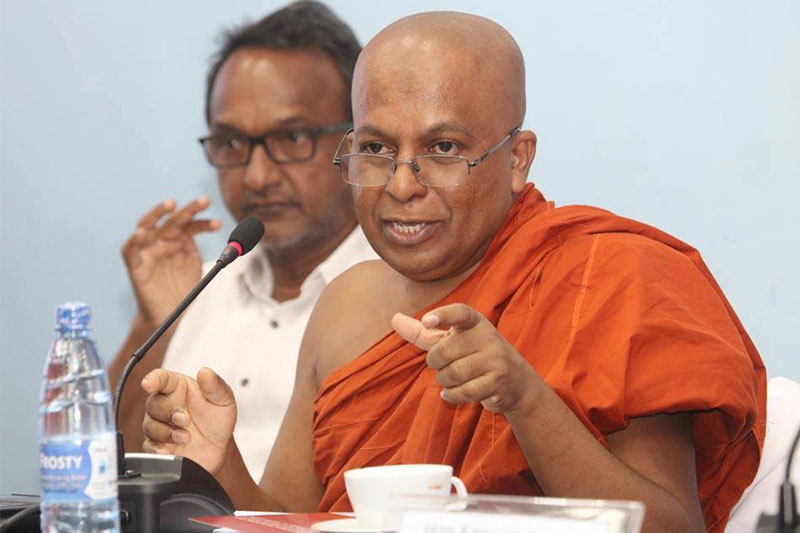 of ethnic and religious convulsion. The nationwide spread and virulence of these hate-mongers are jeopardising the very survival of the nation’s democratic polity, economic recovery – especially after the failed constitutional coup of October 2018 and worsened by the April Easter carnage – social cohesion, religious pluralism and international image. A land where Theravada Buddhism is supposed to spread compassion and love for everyone, zealous warriors from the Buddhist sangha is spreading hatred, and the language they use in public is so uncultured and un-Buddhist, which makes one wonder whether these monks actually belong to that noble Buddhist order. ‘Slapping’, ‘stoning’, ‘expelling’ and ‘exterminating’, for instance, are terminologies certainly not those of Siddhartha, whose universal message was compassion, tolerance, peace and love. Sri Lanka remained an exemplary embodiment of this message for millennia. It is therefore shocking that this message is now twisted, corrupted and sacrificed by militant priests at the altar of political aspirations. 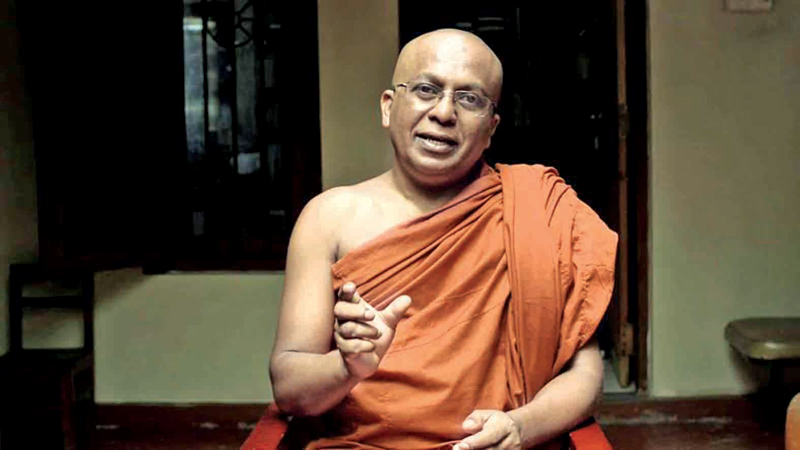 
It is in this disturbing and gloomy atmosphere that one comes across a voice of calm, hope, serenity and compassion, in the figure of an unassuming but dignified spiritual personality, Ven. Galkande Dhammananda Thero (Ven. Thero), who is tirelessly working from within and outside the quiet precincts of the Walpola Rahula Institute (WRI) in which he is the Director of Buddhist Studies. Little I knew about this great soul when I first met him a couple of years ago. With a few dignified words of welcome and short and friendly chat in English (because my Sinhala is too poor), his kindness, sincerity, composure and intellect melted my heart and made me realise that Sri Lanka has produced another Buddhist scholar-son on the footsteps of such spiritual and intellectual luminaries like Ven. Velivitta Sarankara, Walpola Rahula Thero and Maduluwawe Sobitha Thero.

While being attached to WRI, he is also a full-time lecturer in history at the University of Kelaniya. With a B.A. degree from the same university, M.Phil degree from the prestigious Jawaharlal Nehru University in India and currently working to complete a thesis for PhD, Ven. Thero’s academic credentials are impeccable.  More than his academic achievements it is his utter dedication to work for peace in the country and betterment of its people irrespective of their ethnicity, religion and social status that won my admiration to this venerable personality.

In all his public speeches, which are available electronically, he interweaves methodically and expresses intelligently the noble principles of Buddhist love (metta), compassion (karuna), joy (muditha) and equanimity (upekka), which have been thrown out of the window by the zealots. Like his master, Sir Walpola Rahula, Ven. Thero sees the emptiness of Buddhist cultural practices and rituals without an inner commitment to those principles. One should be a Buddhist by heart and action rather than by words and appearance, is his simple message, which in fact is applicable to followers of all religions. It was this belief in the inner cleanliness of heart that must have impelled Ven. Theo to publish Rahula’s Sathyodaya, both in its original Sinhala and translated English versions. I had the privilege of reviewing this invaluable and timely publication. It is time the street vendors of Buddhist supremacy reads this wonderful critical piece on Buddhist practices.

One area in which Ven. Thero is spending much of his time is social healing. Given the current troubling social climate in the country, caused by the festering wounds of a bloody civil war and its collective trauma, and the ongoing religious and ethnic restlessness, social healing has become a priority need if the nation were to preserve its plural identity and cultural heritage to achieve any progress.  It is on this realisation that the “Rahula Dialogue: An Interreligious Dialogue Programme on Social Healing”, has been initiated under Ven. Thero’s leadership and guidance. In this initiative he has been inspired by Lord Buddha’s teaching of Bahujana Hitaya or betterment of all. Striving for social justice in support of society’s vulnerable, marginalised and discriminated is one of Ven. Theo’s lifelong commitments and towards which he is constantly in touch with other religious leaders. Through modalities of truth, reconciliation, forgiveness and restorative justice, social healing helps to build trust, confidence and hope amongst people, without which no nation can enjoy peace and prosperity. However, Ven. Dhammananda is realistic enough to admit the limitations of this project and the many hurdles to cross.

There is no better illustration of Ven. Dhammananda’s commitment to social healing than when he lost no time in visiting Digana after the anti-Muslim riots in 2018 and Negombo after the Easter bombing this year. It is no exaggeration to assert that it was his very physical presence in those trouble spots that prevented further escalation of violence to Muslims. While political leaders were dragging their feet to even console the victims this great soul was there on the spot to show his concern to the affected.

Apart from or in addition to social healing he is also associated with the project, Religion for Responsible Government (RRG), in which his essential message to rulers is to adhere to the fundamental principles of all world religion.  Since Sri Lanka is the home for four such religions it is imperative for rulers to promote the positive commonalities among them while respecting the differences. WRI under Ven. Thero’s directorship has provided a safe haven for all religions, and without much fanfare is performing yeoman service to peace in the country. Ven. Dhammanada’s is a fearless voice of sublimity and humanism amid deafening howls of hatred and venom spread by some Buddhist supremacists.

It is in this fearless voice of humanism that I see an opportunity for minorities and the neutral minded to rally behind Ven. Dhammananda to work for peaceful coexistence with dignity. One of the drawbacks of the strategies that minority communities have adopted so far in trying to find solutions to their problems is to avoid discussing their issues with civic forums and religious leaders within the majority community. By concentrating entirely to talk about their grievances through their own political platforms and political leaders, minorities have isolated themselves and neglected the fora of neutral voices from the majority community. This has been a historic blunder. Unless the majority is made to understand the ethical and moral rationale behind minorities’ grievances and the need for justice, it will be difficult to find permanent solutions to the nation’s pestering issues. Politicians have a vested interest in keeping the majority prejudiced and continue with their empty promises to the minorities.

It is in this context the activities of WRI and the voice of its Director Ven. Dhammananda Thero receives extra significance and weight. With unlimited compassion and unfailing commitment to social justice to achieve betterment for all, there is hope for redemption to communities that are facing an existential crisis in this country.  Under his moral leadership and guidance, minorities have an opportunity to speak to the heart of Buddhist Sri Lanka to win its sympathy and comfort so that a powerful moral force can be built to achieve national reconciliation. To go behind politicians to achieve this objective is to chase after a mirage.

There is one problem however, that this great man of compassion, understanding and love faces in the current climate of Sri Lanka. That is, he and the dedicated team that works with him are an endangered species that need to be protected. This is where the silent majority in the country can show its support to the work his team is engaged in. Networking is the art of popularising and strengthening modern-day social movements. It is through such networking that Ven. Thero’s true Buddhist ideas should and could be spread within the grassroots and that a powerful moral force is gathered to save the nation from the evil propaganda and poisonous preachings of the unscrupulous, dishonest and un-Buddhist zealots.