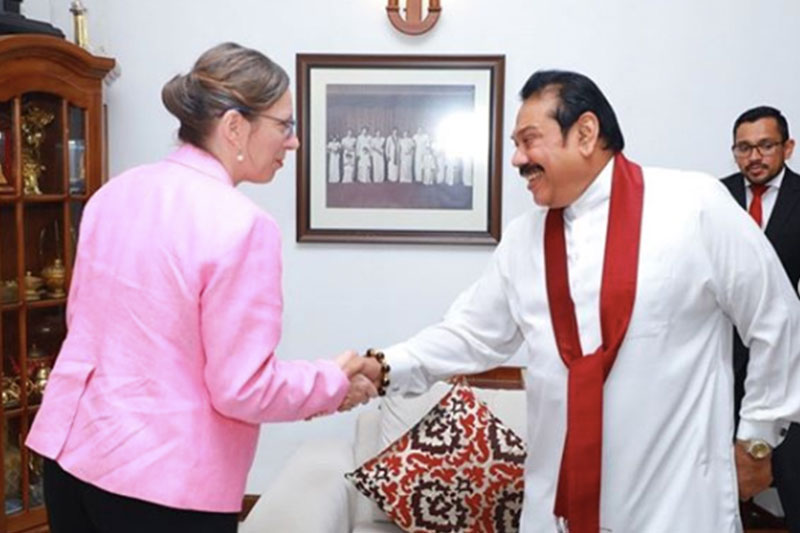 Former President and Opposition Leader Mahinda Rajapaksa, who together with the ‘joint opposition' in parliament led by him have continuously opposed the Sri Lankan

government’s discussions with the US on several key defence agreements, has today met with US Ambassador to Sri Lanka, Alaina B. Teplitz.

The meeting had taken place at the Opposition Leader’s official residence in Colombo.

The US and the government of Sri Lanka are in the process of reviewing and discussing the signing of the Acquisition and Cross-Servicing Agreement (ACSA) and Status of Forces Agreement (SOFA) that were signed in 2007 and 1997 respectively.

Opposition has also been raised against signing the US Millennium Corporation Challenge (MCC) compact for Sri Lanka. Despite the MCC compact being targeted for development programmes in the highways and transport sectors, the Opposition claims the agreement too would impact the country’s sovereignty.

However, the Rajapaksa led Opposition has been continuously criticizing the government of Sri Lanka for negotiating with the US to sign the two agreements, stating it would harm the sovereignty of the country and would lead to the setting up of a US military base in Sri Lanka.

Key among the Opposition critics are MPs Wimal Weerawansa and Udaya Gammanpila.

Finance Minister Mangala Samaraweera, who was the country’s former Foreign Minister, on several occasions severely criticised the Opposition for “anti-US fear mongering” against signing agreements between the two countries.

Samaraweera has noted that it could have a significant impact on relations with the US, which is Sri Lanka’s largest single country export partner.

According the Minister, Weerawansa was on a campaign to spread fear and hate against engagement with the US, which would not be beneficial for Sri Lanka, as the US is Sri Lanka’s largest single country export partner, annually purchasing about $3.7 billion worth of goods and services.

“The Opposition is jealous of our achievements. We took a country that was isolated and broadened engagement with many international countries. Sri Lanka has benefited from this engagement, whether it is GSP+ or the US$ 480 million grant from the Millennium Challenge Corporation (MCC). I can speak extensively on the MCC grant, because I have been personally involved, and the funds have been allocated by the Government to improve a range of services, including transport and land. The grant may not seem like much, but as a middle-income country, Sri Lanka does not receive such large amounts of funds anymore, and it is important that it be productively used,” the Minister told the media last month.

Samaraweera also dismissed Weerawansa’s claim that the new versions of the SOFA and ACSA agreements were different and would threaten Sri Lanka’s sovereignty, by pointing out that the documents only had more pages because additional addendums were attached.

“It is ridiculous to say that the agreements are bad for Sri Lanka based on the size of the agreements, or the number of pages. I ask Weerawansa to learn an additional language and come see me, so that I can explain to him what is exactly in these agreements. The first ACSA agreement was signed in 2007 by none other than former Defence Secretary Gotabaya Rajapaksa, so how can he say this agreement is bad? SOFA was signed in 1997 and will only be renewed. What catastrophes have befallen Sri Lanka because of it? Ninety-four other countries, including India and Malaysia, have signed these agreements, and they have used them to engage more and develop their countries. Instead, we are being pushed in the opposite direction by a person who has no idea what they are talking about, a person with a small mind.”

The US has meanwhile rejected false claims which implied that America is interested in building a military base in Sri Lanka.

US Ambassador to Sri Lanka, Alaina B. Teplitz has insisted that the US have no plans of establishing military power in Sri Lanka.

Meanwhile, US Embassy Spokesperson Nancy Van Horn has told the media that as democracies in the Indo-Pacific, the US and Sri Lanka have a built a strong partnership that enhances security for the people of the two countries and for the region.

She has recalled that in 1995, the US and Sri Lanka concluded an agreement on the status of US Department of Defence (DoD) military personnel and civilian employees who visit Sri Lanka for exercises or official duties.

“We have proposed amending this agreement to include some additional privileges, such as the mutual recognition of professional licenses, how US military personnel and DoD civilians can visit Sri Lanka, fees for support services rendered, and regulations for hiring foreign and local contractors,” she has been quoted as saying.

Van Horn has further noted that the updates will streamline processes already in place and will facilitate collaboration with the Sri Lankan military on counter-terrorism practices, maritime security, and other issues of common concern.