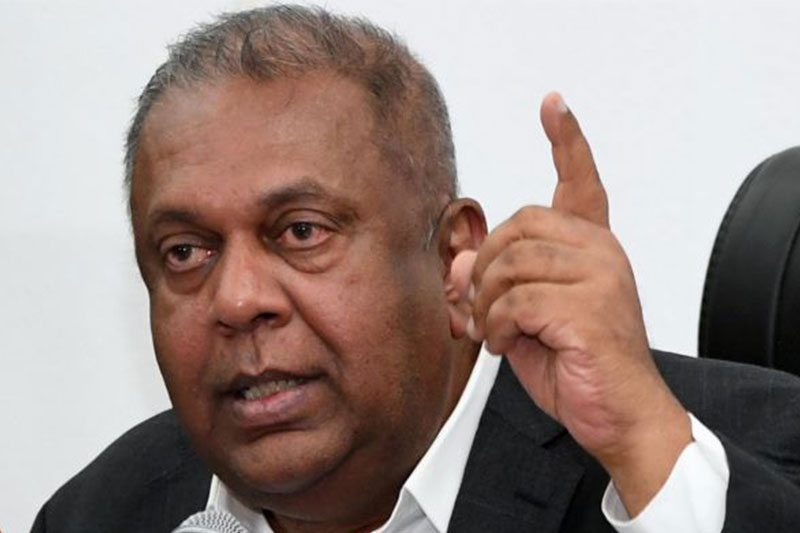 Finance Minister Mangala Samaraweera claims he has now been given an easy opportunity to become a billionaire all thanks to Thiniyawala Palitha Thera. Minister Samaraweera, who is currently abroad on an official visit, made these comments over the phone when questioned by The Leader on the statement made by Thiniyawala Thera at a press briefing held yesterday.

The Minister also confirmed that he plans to file a defamation case demanding Rs. 1 Billion for the damage caused to his good name.

He also said he would file similar cases against television channels ‘Ada Derana’,’Hiru’ and several other websites such as ‘Lanka C News’ which publicized the comments made by the Bhikku in a malicious manner without any further verification.

The reason behind mudslinging?

“Everyone in the country knows why this Priest is slinging mud at me. I removed him from the Director Board of Lanka Hospitals. That was based on a policy decision. I do not appoint any clergy to Director Boards functioning under me as I feel it is unsuitable,” he said.

“Anyone can say what they please but Media must be more responsible when publicizing such news. I was not even the Subject Minister during the time periods being mentioned by the Thera. The media has not even fact-checked these and published the story in a malicious manner because I have stopped giving them advertisements,” the Minister added.

The Minister had ordered the agencies under his Ministry to refrain from giving advertisements to the channels following the Easter Sunday attacks due to the racial line of reporting carried out by them.

The Minister also said he would make further revelations about the comments made by Palitha Thera on his return to Sri Lanka.

“I will not only reveal the politicians behind the Thera’s comments but their corrupt practices where they stole public property,” he said.

The video below also gives a further explanation as to why the Thera has commenced a mud-slinging campaign against the Minister.