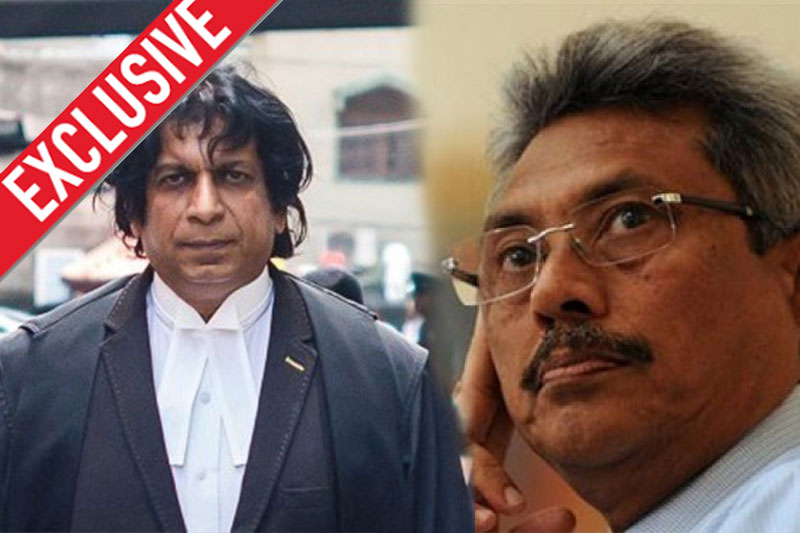 Attorney General Dappula de Livera has been in the limelight during the past few weeks as a man on a mission serving indictments in several long dragging probes as well as calling for trial at bar benches to hear cases on several key incidents that took place during the former Mahinda Rajapaksa regime.

However, looking at the manner in which the Attorney General has been serving indictments and forcing law enforcement authorities to apprehend the accused, it is evident that the Attorney General is neither working for President Maithripala Sirisena nor Prime Minister Ranil Wickremesinghe, but according to the agenda of former Defence Secretary and presidential hopeful Gotabaya Rajapaksa.

It is reliably learnt that despite over 100 completed investigations pending before the Attorney General that have been forwarded by the police Financial Crimes Investigations Division (FCID) and the Criminal Investigations Department (CID) (e.g. money laundering cases against former monitoring MP of the External Affairs Ministry, Sajin Vaas Gunawardena, former Minister Mahindananda Aluthgamage and other SLPP figures), the Attorney General has selectively forced the CID to send files on open investigations (such as Lasantha Wickrematunge murder, Upali Tennakoon assault, Prageeth Eknaligoda disappearance and Keith Noyahr abduction).

The Attorney General, without allowing the completion of investigations, has rushed indictments against the junior officers against whom material is now available, while letting the likes of former Defence Secretary Gotabaya Rajapaksa escape.

It is also learnt that despite the CID’s vehement objections, the Attorney General had leaked to the public and media the very sensitive information relating to Warrant Officer Lalith Rajapakshe of the Tripoli Team allegedly involved in the murder and attacks on media personnel, blowing the cover of the CID officers who were investigating Rajapakshe, and alerting him to his impending arrest as well as the evidence against him (the fingerprint) allowing him to prepare a story before the CID could question him.

When Rajapakshe was arrested, the Attorney General has reprimanded the CID for keeping him in remand by using an identification parade, saying it was only an assault charge.

The Attorney General has also leaked to the media that Rajapakshe was to be charged with the Keith Noyahr abduction and leaked the charges against them, which in turn allows the defence counsel in that case to prepare their response even before the CID has had an opportunity to question the suspect on these charges.

Meanwhile, at the Supreme Court, the Attorney General recently agreed to amend Gotabaya Rajapaksa’s indictment in the D.A. Rajapaksa monument case, delaying that case even further.

It has now been almost a year since the case was filed and it was done despite the Supreme Court hearing the case before only three judges, when according to the Judicature Act Amendment last year, any challenge to a Permanent High Court at Bar order needs to be made before a bench of five Justices of the Supreme Court.

Also, the Attorney General has filed indictments in both the Rathupaswala shooting and Welikada prisons cases before a Trial-at-Bar, but has conveniently ignored all evidence against Gotabaya Rajapaksa and his people in both cases, and has not charged them, but has only resorted to accuse junior officers.