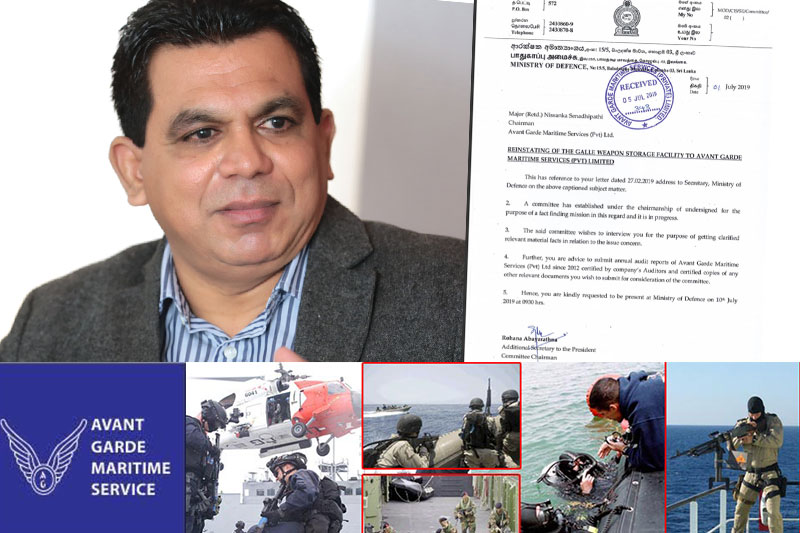 The Attorney General’s directive to the Acting Inspector General of Police (IGP) to arrest Avant Grade Maritime Services Limited Chairman, Nissanka Senadhipathi has come three days after the Defence Ministry, which is under the purview of the President, had issued a letter expressing interest in resuming the Galle Weapon Storage Facility with Avant Garde, it is learnt.

The letter dated July 1, 2019, signed by Additional Secretary to the President, Rohana Abayarathna sent to Senadhipathi states that a committee has been appointed under his (Abayarathna’s) chairmanship to study the matter of reinstating the Galle Weapon Storage Facility with Avant Garde Maritime Services Limited and that the committee wishes to interview Senadhipathi to clarify details about the business.

Invitation to a meeting

The letter has requested Senadhipathi to attend a meeting at the Defence Ministry on July 10th, 2019. 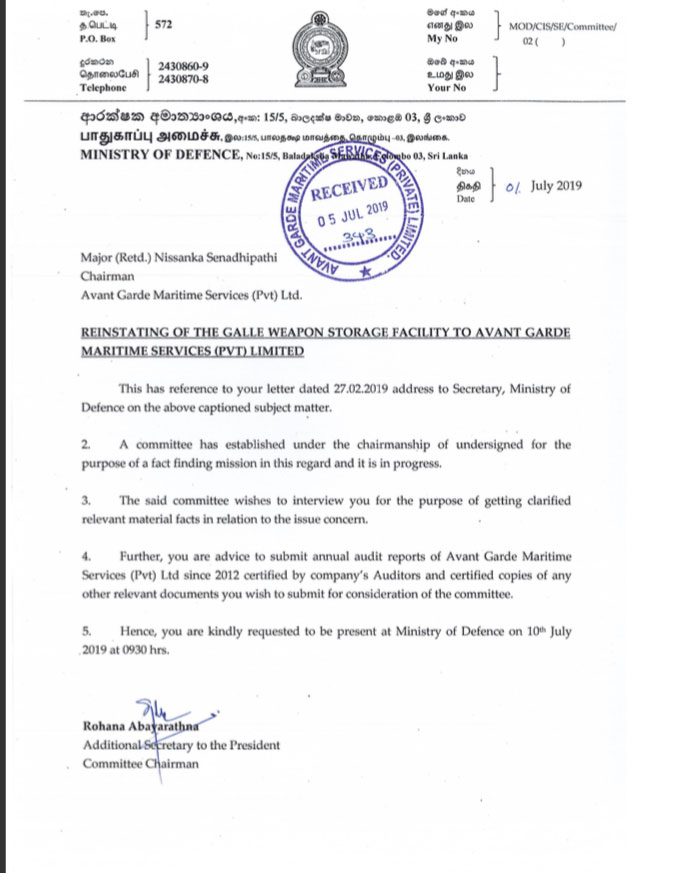 Interestingly, three days after, on July 4th, an order was issued to arrest Senadhipathi along with seven other in connection to the Galle floating armoury case.

Senadhipathi has stated that the Presidential Commission appointed to probe the matter had submitted its report in November 27, 2017 and that the report has outlined no irregularities in the business carried out by Avant Garde Maritime Services Limited.

The report has in fact has recommended the resumption of the business in manner that is beneficial to both the government and the private sector partner.

Senadhipathi, who is currently overseas for medical treatment, has said he had no reason to evade the law since he has not defrauded the country of monies like Arjuna Mahendran and has not committed a crime.

"I will return after treatment"

However, Senadhipathi has said he would return to Sri Lanka following his treatment and surrender to the court. He has made this statement in a Facebook post. Following is Senadhipathi’s post:

“I, Nissanka Senadhipathi, have shaped my life in line with the training I received as a soldier in the Sri Lanka Army Commando Regiment and my life’s motto is that of the Commando Regiment, “Nothing Impossible.”

Following a surgery I had to undergo about three and a half years ago, I have had to receive medical treatment in Singapore and Germany from time to time according to the recommendations made by specialist doctors in Sri Lanka. Accordingly, I had to travel overseas about three days ago for medical treatment and I did so after informing the Sri Lankan courts. I would like to inform the people of Sri Lanka that I have never tried to avoid or ignore the law of the country or try to manipulate it in any manner. I have not done so and have no intention of doing so in the future.

I have engaged in a joint venture with the government and have brought a large amount of foreign exchange to the country. Accordingly, I have paid 40% of the earnings (approximately Rs. 4,000 million) to the respective government in office. I have never used monies from Sri Lankan tax payers for any of my business endeavours. My businesses have solely been dependent on foreign earnings.

Rakna Arakshaka Lanka Limited has already informed courts in writing that the weapons on board the Avant Garde vessel were purchased by Rakna Arakshaka Lanka Limited from the government’s central armoury (receipts issued by the central armoury to Rakna Arakshaka Lanka for the weapons purchased have also been filed before court. Also, the second Secretary of Defence of the Yahapalana government, Karunasena Hettiarachchi had granted official permission to transport these weapons on board the vessel from the Red Sea to the Galle Port. However, all these truths have been cast aside by some sinister element and attempts are now being made to arrest me claiming these weapons as well as the business were illegal.

I, Nissanka Senadhipathi, have always conducted all matters in a manner that would not bring any dishonor to my name. I will continue to carry out my actions in line with this discipline. While I’m in Singapore, I learnt through social media as well as through my friends in Sri Lanka that the Attorney General has directed the Acting Inspector General of Police (IGP) to arrest me.

When I heard about the order to arrest me, I decided to arrive in Sri Lanka and surrender to court as soon as my medical treatment is completed.

I continue to believe in the court of law. I have documentary evidence to prove that the 816 weapons that were on board the vessel were purchased by Rakna Arakshaka Lanka from the central armoury, the legal manner in which Rakna Arakshaka Lanka handed over the weapons to the Avant Garde vessel to be used for maritime security, the usage of those weapons in maritime security work, the profits shared with the government from the business and how the weapons on government approval was being transported to the Galle Port to be handed back to the state.

War heroes and war veterans, my brothers and sisters, please join with me in this battle that I’m carry out to safeguard the future of your children. You are my strength,” he added.

Avant-Garde arrests: One down seven more to go!